From Fanlore
(Redirected from Star Date)
Jump to: navigation, search 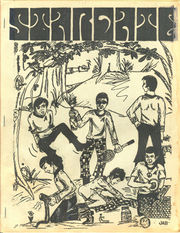 front cover by Jane A. Bowers 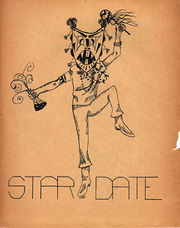 back cover by Jane A. Bowers

From Through Darkest Adolescence with Lois McMaster Bujold or Thank You, But I Already Have a Life.

Some members of the group, heavily into intellectual pursuits such as Also Sprach Zarathustra, were dubious about our enthusiasm for Star Trek. Others took it in stride. Until the day that Lois and I, like Garland and Rooney declaring, “Let's put on a show!” announced that we were going to try our hands at one of those things called a “fanzine”. One dedicated solely to Star Trek.

The others members of COSFS informed us gently that there was no such thing as an all-fiction ‘zine. Neither was there any such thing as a media-dedicated ‘zine. So what? we replied with the zeal of the innocent. We're going to do it anyway!

Lois and I ended up writing almost the entire ‘zine ourselves. Embarrassed, we made up pseudonyms for a few pieces—including stanzas lifted from Shakespeare's “Venus and Adonis” which could be applied to Spock. (“Art thou obdurate, flinty, hard as steel, Nay more than flint, for stone at rain relenteth...”) Illustrations came mostly from Janie Bowers, the aforementioned younger sister, and from Ron Miller, now a pro artist. Intent on doing it up right, we paid to have all the illos electronically etched. More shaking of heads among the COSFS members.

We typed every word ourselves, on long sheets of waxy purplish paper, and, since neither of us were skilled typists, became intimately acquainted with correction fluid, or “corflu.”

Bribed by chocolate chip cookies, COSFS member John Ayotte agreed to run off our ‘zines on his basement mimeograph machine. Janie's cartoon cover had too many dark areas, and stuck inkily to the whirling drum, but John, bless him, donated his own thicker paper for the covers. And so StarDate was born.

There we were, seeing our words in black and white type for the first time. Daring to air our psyches before the world. We were giddy, and not only from the fumes of the corflu.

Lois and I gathered up the precious piles of StarDate and headed down to Cincinnati for Midwestcon, our first convention, squabbling all the way over how much to charge for our baby. Fifty cents? A dollar?

Midwestcon passed in a blur. Rooms full of (mostly male) people talked at the tops of their voices. A man showed old Flash Gordon movies in a subterranean chamber of the motel. There was a banquet at an all-you-can-eat restaurant just up the way. I suppose someone gave a speech, but all I can remember is the quantities of food put away by an enormous individual rumored to be a bodyguard.

The guest of honor, Fritz Leiber, held court by the pool, but we weren't brave enough to approach him. It had still not sunk in to our feeble brains that we, too, even as women, could become Professional Writers.

I don't remember whether it was at Midwestcon or later that we discovered another Trek ‘zine, the delightful Spockanalia. Our impulse hadn't been an aberration after all—Trek ‘zines were appearing all over the country. Today the media ‘zine is a fundamental of fandom.

My own first-and-only youthful fanzine, Star Date, in 1969, was inspired by my seeing Devra Langsam's Spockanalia, and was a collaboration between myself and my best girlfriend, who also went on to become a professional writer. We laboriously typed the wax stencils, page by page, and corrected them with smelly corflu. Much of the art (electro-stenciled at The Editors' expense) was by a friend who went on to become a professional artist with dozens of books to his credit. It was run off with the help of fellow Columbus SF fan John Ayotte, on his mimeo machine in his parent's basement -- John himself was pubbing a general interest fanzine at the time named Kallikanzaros. (Among other wonders I remember from his 'zine was the first chapter of Nine Princes in Amber -- I believe then still in progress -- which Roger Zelazny, with whom John corresponded, allowed him to print, some time before it saw professional publication.) Our own effort, all 200 copies, retailed at fifty cents each, carefully calculated to win back paper and printing costs. Which I believe we did almost do. One of these still surfaces now and again at my book signings; I would say, “Lordy, how often do these people clean their basements?” except that I think I know. (Lois McMaster Bujold in 2005)[1]

StarDate was published in June 1968 and has 49 pages. It has a cover by Jane A. Bowers. Other art by Lois McMaster, Ron Miller, Connie Reich, and Lillian Stewart.

Much-more disheartening [than this reviewer's review of Spockanalia #2 in the zine Kevas and Trillium #1.5] is Stardate, put out by Lois McMaster and Lillian Stewart.

It not only analyzes ST; it writes more plots for the thing. Disgusting propagatory practice. Again, the art, and the layout and. the general appearance, are better than in most fanzines. But, again, the contents are likely to appeal only to the dedicated ST fans. Well-written, exhibiting a great deal of talent — but all stamped by the inky smudge of STdom.

Best piece is Lillian Stewart's "The Sagebrush Syndrome"; it would probably make a good ST script. (There is an episode next season called "The Last Gunfight" - Ed.) ((is that the one with: Wyatt Earp? Ye gads.!))

Cute cartoons by Jane Bowers are scattered throughout, and they certainly don't detract from the fanzine. Actually, its pretty easy to laugh at ST. [3] [4]

STAR DATE: (Now here's a ST literary zine. The artwork here is quite way out and spacey. #1, 50 pages, contains some really outstanding science fiction and poetry. "The Sage Brush Syndrome" takes Kirk, Spock et al to a planet where civilization is modelled after Earth's wild west. But instead of Colt 45s, the cowboys pack Mark III phasers. In "Mind Warp" we are introduced to two new vulcans aboard the Enterprise; T'Jor, a Vulcan psychologist, uses the Vulcan mind probe to treat her patients, and Sivek, victim of an alien who drains thoughts from its victims brains. In 'Variations In Green", we meet, for the first time, a family of Orionians. All in all, this is quite an absorbing zine. [5]