Kevas and Trillium is a gen Science Fiction (with some Star Trek) anthology by Alicia Austin, Maureen Bourns and Rosemary Ullyot that was published in Canada as part of the science fiction zine, Hugin and Munin, the latter which was edited by Richard LaBonte. [1] 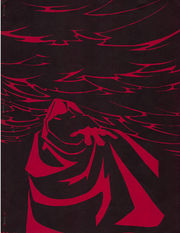 cover of issue #1, Sauron by Austin

Despite the fact the title comes from a Star Trek: TOS episode where Spock posed as a trader of "kevas and trillium" in the episode "Errand of Mercy," "Kevas and Trillium" is not strictly a Trek zine.

"Although not devoted entirely to the television series Star Trek, the title comes from an episode of the show. Articles about Star Trek include the story "Four Days In A Filthy Ford", about Canadian fans driving to St. Charles, Illinois, U.S.A. to see Leonard Nimoy in Visit to a Small Planet; a humorous conversation between Spock and Kirk; a survey of accents on the show; a scientific analysis of tribbles; and a description of The Cartel, headquarters for the Gene Roddenberry Appreciation Society, The Mark Lenard International Fan Club, and the Rick Carter International Fan Club." [2]

Kevas and Trillium 1 was published in June 1968 as 30 pages of the zine Hugin and Munin.

From the table of contents page: "As this last stencil is typed, the Hugo Ballots have arrived. STAR TREK has made a clean sweep of "Best Drama" category -- congratulations to all concerned!!"

The KaT tacked on the end (of HUGIN AND MUNIN #6) [sic] [3] is hard to judge. It consists of assorted funnyisms and reviews by various contributors. Some come off and some don’t, but a mere ten pages gives an impression of haste. The front cover is quite unimpressive and the back is a montage of 3 unused cover sketches for Philip K. Dick’s ‘Solar Lottery’ by Jack Gaughn. Fair fanzine artwork, but nothing more. KaT: judgment deferred. [4]

#1 is free (if it's still available), while future issues will be about 40 [cents]. K&T is not an all-ST zine but it is filled with all sorts of fanish goodies. #1 has a mysterious red cover and 28 pink pages, and contains a cartoon satire: "Super Mounty," a discussion of the accents spoken on ST, a scientific analysis of tribbles, a short summary of the Canadian political situation, a pun-filled conversation between Spock and Kirk, some record, comic book and book reviews, "Four Days In A Filthy Ford" (tale of how a few Canadian fans drove to St. Charles, Illinois to see LN in "Visit to a Small Planet"), plus some fan club news, a description of the Cartel, some obscene graffiti and sneaky jokes-and lots more. P.S.: The Cartel is headquarters for — The Mark Lenard International Fan Club (for Spock's father, Sarek), the

On the table of contents: "With apologies, because I have never stencilled art before and I had no time to experiment. mb."

Also on the table of contents: "Small plea to our correspondents: We love getting mail, but please have patience waiting for your answers. The strike has left us with a stupendous backlog; we'll be in California for two weeks, and we have to think about K&T#2 when we get back, besides putting out a newsletter and drastically revising our address records. We do appreciate letters, and we'll get to them - eventually! COMING SOON: SuperMountie faces the most stupefyingly evil, blood curdling, spine chilling master of the dark forces - MAILMAN!"