Black Magic is a gen Star Trek: TOS anthology with articles and stories edited by Dale Kagan and others.

It also contains original science fiction and fantasy. From the title page: "WHERE SCIENCE FICTION MEETS SWORD AND SORCERY." 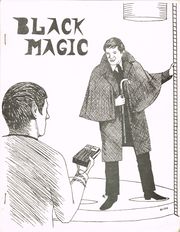 Allow me to introduce myself, I am the inventor of the upside down middle staple! that little gimmick which keeps the last page of your fanzines from falling off.

For those wanting some background on this collection of masterpieces, the idea for Starbourne began with a review by  M.D. Glicksohn about Restoree (Kevas & Trillium #1) which  complained about a technology of a starship having a crew which sent messages to each other on slates. This is an  example of sword and science out of hand. Sword and Science is a term coined by Lin Carter in an article which appeared with several Andre Norton paperbacks (The Sioux Spaceman, Star Guard or Star Born — I'm not sure which). Fantasy stories best exemplified by Lord of the Rings were very popular in a form called Sword's Sorcery. After a while fantasy began to creep into science fiction. Witches of Karres by Schmitz is an example of this sword and science mixture.

The idea for Starbourne culminated with my friend complaining that the warlock in "Dark Shadows" who called up spirits with incantations always lost control of them even after repeating "You are in my power." You will notice a comment on this in the story.