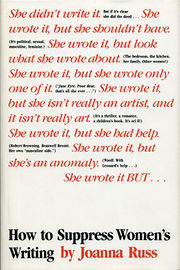 Joanna Russ (February 22, 1937 – April 29, 2011) was an American author and feminist who wrote several Science Fiction and Fantasy novels as well as short fiction and feminist literary criticism. Her first science fiction publish is "Nor Custom Stale" in September 1959 for The Magazine of Fantasy and Science Fiction, a journal to which she contributed between 1967 and 1980.[1]

Read more about Joanna Russ at Encyclopedia of Science Fiction.

It was that essay in MMTSPP that made me look at that strand [about "weak, helpless, rescuable males"] in my fiction. She's my hero. I love her, I've even written a fairy tale about her. [2]

The general impression I had of Joanna Russ was of a cloud of ferocity and no-bullshit anger about everything she did. She went straight to the point in arguments; she avoided theoretical waffling as much as possible. Her work has been always invigorating to read. [3]

In 1985, Russ published an essay in the fanzine Nome entitled "Another Addict Raves About K/S" and later published a modified version of the essay as "Pornography by Women for Women, With Love" in her essay collection Magic Mommas, Trembling Sisters, Puritans and Perverts: Feminist Essays.

I think what happened, the way I have heard it, is that when Star Trek began, a lot of women who had not been interested in science fiction came to be interested through it, although it really is not that much of a female fiction. And what happened was, I suspect, that the Trekkies, the Trek fans, started going to conventions. Now science fiction fans have always done that, but these were specifically Trek conventions, and they got together, they got to know each other. And [slash] began, and I think about that time there were stories hinting that [Kirk and Spock] were in love, and then there were stories about one of them having died and the other saying “Oh God, now I realize it, why didn’t I know it before,” and [these women] kind of got into the subject.[4]

And when you’re doing this [writing slash], you’re inventing, you’re fantasizing. It’s still very much a different world for men and women. I remember somebody, a feminist at Cornell, once said to me, “I was talking to this audience and they were looking rather unconvinced, especially the guys, and then I said, how many people here put only their initials in the telephone listing in the telephone book?” And the women’s hands all went up, and the men went, you do? They didn’t know. They hadn’t noticed. Yeah, they do. And that makes a big difference. It’s like gay friends of mine who went to the March on Washington, and said we were all over the place, we got into a subway and it was nine tenths gay people. And she said you don’t realize what a burden you carry until it’s gone. Everything just went, it was wonderful, and I think that’s true whatever the burden is. Whatever the minority burden or the sex burden, whatever it is, when it’s gone you go, oh my god.[4]

In 1975 and 1976, there was much discussion in The Witch and the Chameleon regarding Marion Zimmer Bradley's book Darkover Landfall, Vonda N. McIntyre's review of that book, and Russ' responses, one of them in the form of her book, We Who Are About To...

In March 1984, Russ gave a one-person panel at Norwescon. The subject was K/S, and it was the basis for Another Addict Raves About K/S and Pornography by Women, for Women, With Love, published a year later.

From a fan who was at this panel:

At Norwescon 7 (Mar. '84), Joanna Russ gave a one-woman panel on K/S, the first time I'd heard it discussed so publicly. Her theory (as nearly as I can recall it) was that heterosexual relationships for K or S weren't as emotionally satisfying because of all the culturally conditioned emotional baggage we carry about male/female relationships in terms of roles, equality, needs, expectations, etc. And female/female relationships wouldn't satisfy us because our cultural "baggage" wouldn't allow us to accept women as heroes or individuals worthy of our love and admiration. She then tried listing the characteristics that K & S each brought to the relationship. Her conclusion: Spock is a woman! By that she meant that he, as a Vulcan, possesses many of the psychological and physiological traits that are traditionally considered feminine in our culture. Examples: he represses his emotions, particular anger, hostility, agression; he prefers to follow rather than lead, advise rather than direct; he avoids physical violence, preferring intellectual approaches to problem solving; his body movements/posture is reserved, stiff, inhibited; he is a virgin; his sexuality is cyclical; he is driven by biological urges (to have a baby? Biology=Destiny?). She had many more, which I can't remember, but I think you get the idea. Her theory was that these "feminine" traits allowed the female reader to identify with Spock in a relationship based on an equality which would be impossible between a male and female. It's an interesting theory, altho I'm not sure I buy it completely. For one thing I was able to come up with quite a few "masculine" traits for S and "feminine" traits for K as well.

And I'm not sure that most female readers necessarily "identify" with S, even though K is the more traditional1y masculine character. What do you think? And if anyone has seen this talk written up anywhere, I'd love to see it, since my memory isn't perfect, and I wasn't prepared to take notes.

Russ also mentioned that both Shatner and Nimoy had seen some K/S material, and that Shatner was amused, but Nimoy was quite upset about it. Supposedly at one point he told his secretary that he was going try try to put a stop to it, but she convinced him he shouldn't; apparently she's a big K/S fan.

Russ also mentioned hurt/comfort stories by way of general introduction to K/S, saying they had become so formularized as to become targets for satire. She mentioned one story in which one of the characters hit the other over the head with a shovel, then immediately dropped to his side saying, "I just wanted to comfort you!" She also mentioned that she has written some K/S, which was published in fanzines under a pseudonym.[5]

Joanna Russ was a great influence on me in many other ways that being my first introduction to slash. Primarily, it was through reading her science fiction. She was one of the earliest writers with BAMF women characters who were tough and could lead and fight, as in her stories in the 'Adventures of Alix'. She also wrote a series of stories and a novel (The Female Man) about the world Whileaway, where all the men had died out in a plague and there were only women left. This sentence from the story 'When it Changed' (probably her most famous work) will give you the idea. Her female protagonist casually mentions that she has fought three duels. That is just the beginning. [7]

I still find her work really meaningful, bitter old increasingly radical second wave feminist that I am. There's an obituary here (Locus magazine) and at Tor, but I'm frankly pissed that her death wasn't more widely covered by the mainstream press: google news says there were only a couple of "news" reports of her death: Publishers Weekly, GayNZ.com...RIP, Joanna. I hope heaven is where you get to read all the books that earth women never wrote. [8]

Thank you for everything, Joanna Russ. [8]

I just came online a minute ago and read this. I started reading Russ in the mid 1970s, in that wonderful rush of women's writing in Science Fiction. My favorite fiction by her is Extra(ordinary) People and the Alyx stories, but I keep coming back to How to Suppress Women's Writing. Rest in peace--we owe you. [9]

When I read The Female Man, I argued energetically in my head with both book and author. The thing is, that's the first book I can remember reading that caused me to do that. And that was after college. I owe Joanna Russ for the discussion, and for giving me a place in it. [10]

I will miss her. Her books affected me more than I can ever say. [10]

Joanna Russ’ fiction and criticism helped advance the dialogue regarding sexism in the field of science fiction and fantasy and she is perhaps most well known for her 1975 work The Female Man, the 1972 short story “When It Changed,” and her writing guide How to Suppress Women's Writing, both of which you can read more about at the above links. Her accomplishments continue to inspire present day SFF writers. She will be missed. [11]

She was wonderful and this is a great loss. If you've never read her nonfiction—it has a sharp-edged angry brilliance to it, and at the same time an undeniable crackle of humor. Her acerbic pillory of gothics : "Someone Is Trying To Kill Me, And I Think It's My Husband" Her writings on worlds without men before Tiptree and Russ herself had the audacity to say, "worlds without men, that might be pretty fine, actually." And, of course, "How to Suppress Women's Writing." It is a thing of joy that I still bring out when I hear women writers excluded from the canon by well-meaning men who don't mean anything by it (it's just that Austen is too romancey, or Emily Brontë is too emo).[12]

I well remember how viciously the book was attacked at the time, and how condescending even most of the favorable reviews were. The world wasn't ready for it, and it helped create the climate in which it can be forgotten how high a hill she had to climb. [12]

She was very important to me. First Diana Wynne Jones, and now Joanna; our mothers are leaving us. Let us love what they left us, and strive to do them proud to honor their memories. [13]

"When It Changed" - the answer so many of us wanted to give to the entire 'planet of the bimboes' genre. Joanna Russ was also a proud essayist and supporter of K/S and slash before it was popular to do so - back when the prevailing attitude in fandom was that all that stuff was the stupid stories those sick bitches were writing for the sole purpose of ruining Star Trek fandom for "us" (dudes). I still have copies of her K/S essays. [14]

I'm so sad that Joanna Russ has died. With a single short story she turned me into a fan of feminist science fiction (Tiptree and Le Guin I would understand later, when I got older) when it was still hard for me to see beyond the realities of being fourteen in a school district that taught (as required by law) that "a mutually faithful monogamous heterosexual relationship in the context of marriage is the best lifelong means of avoiding diseases transmitted by sexual contact, including Acquired Immune Deficiency Syndrome (AIDS)" and wasn't technically allowed to mention the sexuality of Arthur Rimbaud or Walt Whitman. I loved her criticism. One of her lessons that stays with me is how much being able to see, and read, and make critical judgments happen within the context of the patriarchy. [15]