Magic Mommas, Trembling Sisters, Puritans and Perverts has the title page subtitle: "Essays on Sex and Pornography." The cover has the subtitle: "Feminist Essays." 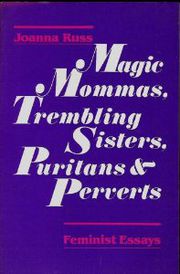 It is a collection of essays by science North-American fiction writer, literary critic and fandom participant Joanna Russ.

The chapter most known in fannish circles is Pornography by Women, For Women, With Love (Originally published in 1985, as an essay in the fanzine Nome entitled "Another Addict Raves About K/S" and later modified for the book). This chapter analyses the possible psychology behind the desire to read slash, which she understood because slash is the kind of fantasy that works for her personally. She posited slash is about female sexuality, not gay men, not men at all but the type of relationship women want (with men or other women).

I always like to see someone else take Star Trek seriously besides me, and if it is outside fandom, all the better. Recently, I discovered two scholarly books that concern themselves, at least in part, with Star Trek (I have the good fortune of being employed at a college library). One deals with American popular culture [American Monomyth] and the other with feminist issues, and I must say it has been fascinating delving into them.... My second find was a collection of feminist essays called Magic Mommas, Trembling Sisters, Puritans and Perverts by Joanna Russ. In it is an essay entitled, "Pornography by women, for women, with love." In the opening paragraphs, she discusses the title and says something like, "Now that I've got your attention, let me tell you about Star Trek." She proceeds to take a look at the K/S literature and comes up with a decidedly "thumbs up" verdict. I'd like to point out that I had never read any K/S when I read this essay, and I wasn't sure how I felt about it except that it seemed a rather alien concept to me. Reading this essay, however, gave me a way of approaching K/S, and it provided me with a background which allowed me to enjoy the K/S I finally did read. I think the most interesting premise of the essay was that, although Kirk and Spock are both male, the stories are really not about male love. They resemble love and sex from a female point of view rather than a male one (a main example used is that in traditional male-female relations, women wait and men act. In many K/S stories, neither of these men act; they wait, and hem and haw and wonder if what they are doing is right). Other pluses: androgyny—Kirk and Spock are equals and take on equally both male & female roles in love; the celebration of male beauty, as Russ puts it. We (female) readers get loving descriptions of two terrific male bodies. The author's conclusion is that K/S is not pornography in the popular sense, which defines pornography as disgusting and degrading. K/S, seen in the light of Russ' article, is sexual fantasy of a sophisticated nature. It's not about S & M, even though violence is often done to the characters. It's about a satisfying love between the ultimate equals, the kind of love rarely found in reality. Well, I'm sorry if I've bored anybody who's been through all this before, from religion to K/S and back again, but talking about things like this is what makes being a fan fun and special for me. And isn't sharing what being a fan is all about? [1]