flyer for the club included in the 1976 Imagi-Con program guide. Click to read.

By 1976, the club sponsored (along with another club, Starseekers) Imagi-Con. 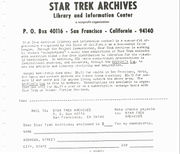 This fan club had some different "divisions."

Star Trek Archives is a non-profit, tax-exempt Civic League recognized by the State of California. Our goals, since formation in October, 1973 have been threefold:: first, to serve as a permanent library of Star Trek and related materials; second, to promote artistic and literary creativity through our publications, and third, and most importantly, to provide a variety of local charity-oriented services. We are currently building a collection of books, magazines, newspaper clippings, artwork, and similar materials connected with Star Trek and other science-fiction subjects. Donations are gratefully accepted, and all library materials are available for perusal by and/or loan to our members. Through our publications, primarily the ARCHIVES' LOG, we provide a forum for imaginative and creative artwork, poetry, and fiction and non-fiction articles in the fields of Star Trek, general science fiction, and related science subjects. Submissions from both members and non-members are appreciated... Recently, due to increasing costs and a desire on the part of the Editorial Staff to improve the scope and quality of the LOG, a bimonthly publication schedule was established, which will allow for an amount and quality of published material equal to a monthly fanzine, but with fewer delays in mailing. The ARCHIVES' LOG is available free to members (see membership info below), and on an exchange basis with Star Trek or science-fiction fanzines. Our main service function is Project Communicator, which will bring the magic of Star Trek to the visually handicapped. After producing audio adaptations of the episodes with necessary narration added, we will distribute these to libraries and organizations for the visually handicapped, free of charge. Several Star Trek cast members, including James Doohan, George Takei, and Nichelle Nichols, have offered their services as narrators for our current demonstration episode and/or the future production tapes. In addition, STA makes Star Trek presentations for shut-in audiences at hospitals and other institutions, and works to develop our interest in Star Trek in other charity oriented directions. [2]

In the October 1974 issue of its newsletter, the president gave a recap of the previous year:

Last October, Star Trek Video Archives (we dropped 'video' from our name after our activities expanded and we became service oriented as well) elected its first officer During our first year our membership has grown from just under twenty to over one-hundred card carrying "trekkers", many of whom were drawn to our ranks by our Star Trek Benefit last February. Over one thousand attended and at least that number were sadly turned away.

After our benefit, Star Trek Archives grew to such proportions that we had to find a third larger meeting place. Dick Mayfield has been kind enough to open his home to us every Tuesday evening, as well as give us the exclusive use of one room for our library (until then we were a library in name only). During our first year, we also received a non-profit status from the State of California as a civic league (which really blew our lawyer's mind!). This put us in the same category as the Shriners and Elks, etc. We're still waiting word on our application for non-profit status from the Federal Government. Once we get this, memberships will be tax deductible. All this is possible because STA is more than a fan club. We're a service organization as well, contributing to the betterment of the community through Star Trek, (no one else can say that!) We periodically go to the pediatric wards of local hospitals and give the kids a free Star Trek presentation, slides, etc. Our main service project is however, Project Communicator, our attempt to adopt Star Trek for the blind by recording the soundtracks of Star Trek episodes and adding narration to explain the purely visual scenes. These tapes will then be sent to organizations for the blind for final distribution. To this end, we have secured a waiver from the Screen Actors Guild. Jimmy Doohan (Scotty) has narrated, free of charge, our demo tape which we made to show Paramount that STA can indeed produce a professional product. While Project Communicator is still on the drawing board - there are a lot of legal barriers we have yet to overcome - it is still the biggest feather in our cap. We wouldn't be a non-profit organization (and enjoy all the privileges that go along with it) or have the prestige within the inner circles of Star Trek Fandom that we have with it. We are planning our second annual Star Trek "Red Hour" Festival to be held tentatively on February 15 at the Cow Palace in San Francisco. (Tickets will be $4.00 for adults and $2.00 for children under ten). Along with showing Star Trek films non-stop, we'll also have a carnival where you can play "Hit the Klingon with a Tribble" and other games for prizes. There will be a hucksters area where posters, pictures, memorabilia, etc. will be for sale, as well as an art auction, trivia contest for prizes and a fashion show presided over by at least one original Enterprise crew member. (Scotty, Sulu, Uhura, we don't know which yet.) All of this will of course take a lot of planning and hard work. If you're so inclined, we can certainly use your help. Just grab my arm at one of the meetings or call me at 586-0293 for assignments. Working on one capacity or another (either as a chairman or gofer) is the only way anyone will get in free!

Well, all in all, I'd say we had a pretty good first year. Star Trek Archives is off to a flying start and could conceivably become one of the most important Star Trek organizations in the country. Keep up the good work gang! -- Charles Weiss

This fan-run organization is different from the depository of Star Trek's canon materials in Los Angeles:

I would like to tell STAG members about the ST archives in Los Angeles. As the more dedicated fans will know, much information on the series is stored at the University of California at Los Angeles (UCLA). In fact, this constitutes all surviving paperwork on the series not in private hands, and includes memos, letters to and from writers and NBC, call sheets, budgets, drafts and various script versions. with the appropriate pass card (which I just happen to have), one can look at these files (they fill 47 large box files) in the library. There are no copying facilities available... [3] [4]