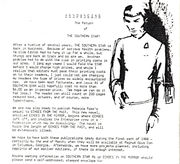 From The Halkan Council #6 (March 1975): "... I've got a new zine for you, my zine. It's called The Southern Star, and it's not just a Trek zine -- although we do have Trek in it. We've also got straight science fiction and a bit of horror. Issue one is out, and we're in the planning stages of issue two. That will have a good deal more Star Trek in it, but not all of the stories will be Enterprise-oriented... Need I say more? Oh, the price on issue one is $2.00 for a 100-page zine."

The Special Edition that Never Happened

In Scuttlebutt #13, the editors proposed a special edition called The Southern X-Posure: "We are looking for stories of good quality writing and plotting, which explore all the fascinating areas of Trek not usually printed in a general audience zine. However, we are avoiding K/S gay stories like a horde of plagues! Slated for publication after SS #5 goes to press. So, as the Klingons would put it, submit!"

SOUTHERN STAR offers a very mixed bag of Trek-wares: puzzles, word games, grafitti, and contemporary science articles enliven its pages, but its main atrraction is a diverse selection of fiction which introduce new . . characters, explore relationships on other starships, and look more closely at the Klingons. A Klingon-English dictionary is another unique fea ture of this zine. Moreover, SOUTHERN STAR prints straight sf and horror stories in addition to Trek-fiction. [1] 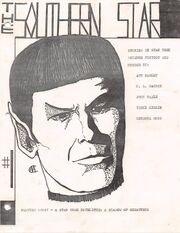 cover of issue #1, M.A. Carson -- "Actually, the face was rather well done. But the top of the head was the wrong shape." -- from a LoC below

Southern Star 1 was published in January 1975 and contains 100 pages.

The pages are printed only on one side, and the binding is poor, something several readers complained about in the following issue.

The article on Zenna Henderson was very nice, but I thought the televised version of The People was pale and insignificant next to her People books.

"A Shadow of Greatness" by Rebecca Ross wasn't bad, but I would have liked to see the Jivaarl world of cat people developed more. Star Trek stories lately have been running very true to form. Just once I would like to read about an alien that was so ugly and so alien that no one could understand their motives. Perhaps another Carlos, the Medusian, but so utterly alien that no one could understand them. Or even the first meeting with the Medusians; surely the ambassadors would have gone insane at first. "Please Bo Not Staple, Fold, Mutilate or Insult" wasn't too bad, but again typical and has been done before. But then again, I think that's a problem we all have. So many ideas have been used before, that it is hard to come up with new situations. Most of the science fiction and horror stories really didn't turn me on, although the stories do show that the authors have talent. In fact, I, would say all the writers have a degree of talent. The only story I object strongly to is "Night of the Rat." If you watch the TV show, "The Wild, Wild West," you would know that the story is too close to an episode called . ..darn, checked the TV Guide and find it doesn't have a name. I just viewed it Sunday night, so I know what I'm talking about. Clock to open the door to the rats' cage at midnight, rats carrying the Plague, all right down to the deserted Southern mansion. Sorry, Rebecca, but that one just ain't original. I would say my favorite story, and no, I'm not going to pick my own, would be a tie between "Daughters of the Sun" and "Make Amy, Too". But I think that "Daughters" could have used more work to be effective. And once again, we have the humanoid life form that hardly comes across as being alien.

"A Shadow of Greatness" is marvelous. As a loyal, devoted Spock and Sarek fan I find it refreshing to see that someone can I write a good story with Vulcans in it.

"Yippie" was a touching story, and Yipple sounds adorable. When he was first mentioned, I fell in love with him partially because of his cute name. As for "Please Do Not Staple, Fold, Mutilate or Insult", it is a riot. It gets better every time I read it. Now for "The Klingon Komer". I love it! "Daughters of the Sun" is a masterpiece. What else can I say? The section of the horror stories is fantastic. Now, that's the kind of horror story I never can get enough of. Also the kind I'd hate to read alone at night. I used to love vampires cecause of "Dark Shadows" and "Oona" has really done justice to a vampire by making him a fiend.

To sum the zine up in one word - Impossible! It really is great! [4]

You know I'm not strictly a Trekfan though I enjoy most Trek material. You have a well-balance zine, and the quality held up in no matter what genre. In order of preference:

1. The Hegemony of Astounding
2. Yippie
3. Night of the Rat

You will receive many kudos on the whole thing, but perhaps from another editor, you might prefer criticism. I liked your "Shadow of Greatness", and it almost nosed out "Yippee". But I nit picked it. Most distressing to me was the fumbling intelligence and drive of Sarek. To me, Sarek has always been nearly omnipotent. It hurt me to see him third-rate. I also thought Kirk was more "boyish" than he should have been. I would[n't] let him command a Starship! The other characters held up well. I also don't care much about the cute captions under the photos. Might appeal though, to some of your younger readers. Saddest of all was the binding. The pins just wouldn't hold that many pages and the zine kept exploding in my hands. I'd much rather have less material and be secure in the reading.

The fiction isn't bad but the art isn't too good. Sorry. I liked the Star Trek novella but methinks Sarek was a trifle over-emotional in spots. Glad Amanda got a chance to do something more than being wifey. [6]

I liked it, felt it was a very good nine, especially for a first effort. I sort of enjoy the two the two of you, meaning yourself and Mac, doing editorials as a Vulcan and a Klingon.

I am assuming that the cover was supposed to be Spock -- it wasn't bad, but wasn't good, either. Actually, the face was rather well done. But the top of the head was the wrong shape. I liked your characters, and the story itself, "A Shadow of Greatness". My major criticism is that I think you were a little off in the character of Sarek. Remember, he is a full-blooded Vulcan, an Ambassador, which means, among other things, that he knows how to keep his cool in the most irritating happenings. And he is married to a human. Anyway, I think he got too upset too often (or showed it too much) with Amanda. and Mariah. Another thing. Because of who and what he is, he is at peace with himself, has all the self-confidence he needs, and thus knows what he wants and where he is. He has the famed "Vulcan serenity". So he would, in the places where you say he almost does things, like smile. He does in "Journey to Babel."

Ah yes. Good old Korax really blew it that time, didn't he?" I would like to see more in the area of your "Shadow of Greatness". I am fascinated by people who have non-human ancestry. I enjoyed Vicki Kirlin's story, though I was also depressed by it. (I felt so sorry for Yippie and the decision he made at the end - and I am extremely fond of sentient lizards.) I generally agree with your reviews of both the LOG books, and of SHOWCASE. And, if you don't have Showcase II, get a copy ; if there are any left). It's better than SHOWCASE I. Mac's "Klingon Korner" was quite enjoyable. It could be e beautiful foil to something like the zyeto quotes that Jacqueline Lichtenberg has running through the KRAITH CREATOR'S MANUAL. Also loved the "Editor's Trials." "Changing Times" was okay ~ a little bit of a twist, there. I'm not sure how much I liked "To My Son Randall". I think we've seen an awful lot of this sort of thing before.

Poetry has problems - but then, I'm no poet! I'm not usually that much of a horror fan, but I rather enjoyed Ann Bagley's "Oona". (I do like - if one can use that word - vampires. I've always thought that Spock-with-fangs. Would be about the most far-out in ' several meanings of the phrase - vampire you'd ever see. *shiver*,) "Night of the Rat' GAAHH!! (How could you end it that way?)... Oh, that reminds me of one other criticism I had. Sometimes your descriptions get out of hand. You seem to put down more than is necessary, and you also seem to string phrases together into too long a sentence. (I noticed this is "Shadow of Greatness", and "Night of the Rat".) I am also a Zenna Henderson fan, have all of her books - she's one of the few writers who can bring me to tears - and I did enjoy Ann's review, and her very Hendersonian story at the end of the zine. Now some very general comments and questions. If possible, try two sides of the page next time. (It looks more professional and costs less in postage, etc.) But you may have your own reasons for doing otherwise. Question how'd you do the photos? They look like they were xeroxed - not too bad a job for the purpose they were used, (Oh those captions! I was in hysterics.)

In general, I'd say that SOUTHERN STAR was well-done and I think a lot of what I liked was the variety of stories. You and the others are already pretty good writers, and I'd say that you will, in all probability, improve as you continue doing SOUTHERN STAR. I am looking forward to receiving the second issue. Good luck with it! [7] 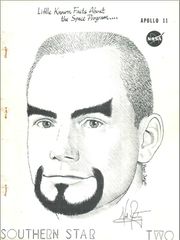 back cover of issue #2, Katy Wolfe

Southern Star 2 was published in February 1976 and contains 189 pages. "Little Known Facts About the Space Program..." is on the front cover.

It is a Klingon issue.

[Cartoons, amusing little twisted vignettes from the series, riddles, and so forth are sprinkled through the zine. Missives from a Romulan spy aboard the Enterprise are scattered between stories. And there is a puzzle section.] 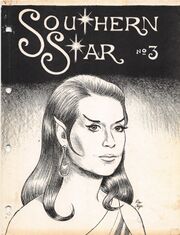 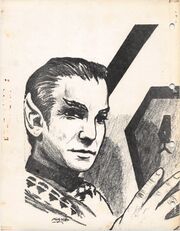 back cover of issue #3, Katy Wolfe 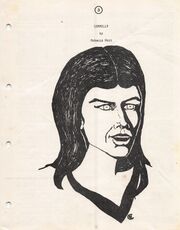 Southern Star 4 was published in March 1978 and contains 100 pages.

The editor was Rebecca Ross, the co-editor was M.A. Carson. 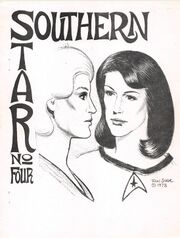 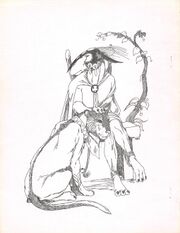 back cover of issue #4, Hans Dietrich

inside page from issue #4 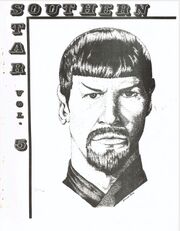 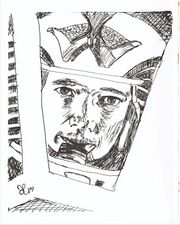 back cover of issue #5, Julie Lee 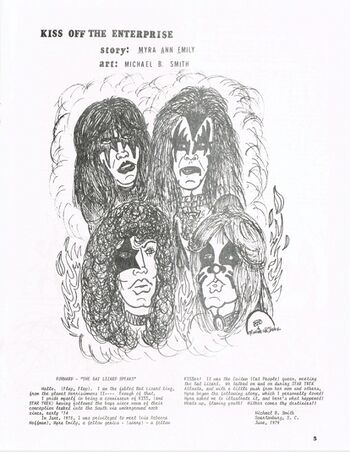 inside sample from issue #5

Southern Star 5 was published in October 1979 and contains 100 pages.

The front cover is by Heather Firth, back cover is by Julie Lee, and interior art is by Michael B. Smith, Dawn Singer, Julie Lee, Miriam Amos, Chuck Hart, Janet Meehan, Amy Harlib, and M.A. Carson.

It was edited by Rebecca Hoffman, co-editor was Cindy Simons, associate editors were M.A. Carson and Faith Carson.

From an ad in The World of Dark Shadows #27:

A DARK SHADOWS story by Donna Chisholm titled "Masque", illustrated by Janet Meehan. Al so includes STAR TREK fiction, with a Mirror Universe look at the "Balance of Terror" episode, a story based partially on the pro novel "Price of the Phoenix", and much more. Some excellent art rounds off this issue-- oh, yes--there is the next installment of the Klingon dictionary for those of you inclined to travel long distances…

Special Edition: Echoes from the Past

Echoes from the Past is a Special Edition of "Southern Star."

There was to be a sequel to this novel to be published in 1988 called "Echoes of the Mirror."