The Time of Surak 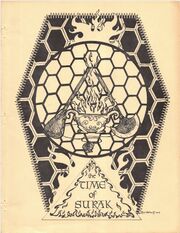 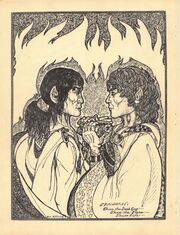 back cover by Amy Falkowitz 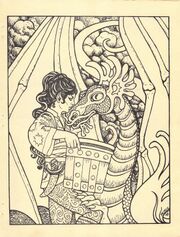 inside back cover, Gayle F 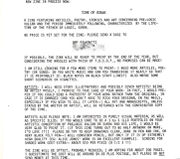 The zine you now hold in your hand is the result of over two and a half years of thought, effort, fun and frustration. I think I've had the basic idea for this project in the back of my mind ever since I first saw "The Savage Curtain" back in '69 (one of the few ST episodes I saw in their first run or first repeat.) I never really liked that episode; it's certainly not one of the finer ones. But there was something special about Barry Atwater as Surak, Father of the Vulcan Logic Philosophy (or, to be more accurate, the "image" of Surak, and image that still managed to stir Spock.) Here was the personification of all that was dear to our favorite half-Vulcan's heart (or what he thought was so).

And then, of course, we had several other episodes that hinted at bits and pieces of that unspoken Vulcan heritage of barbarism. We have "Amok Time", with all its horrible savagery and pain, an inheritance that no Vulcan wants to admit. And in fandom there have been many debates as to "why the pon farr", where did it come from, how did it evolve, what purpose does it really serve, etc. etc. There are none of those really in here, though it is mentioned in passing in several pieces. And we have "Is There In Truth No Beauty?" with the IDIC, that symbol most revered by Vulcans. And "All Our Yesterdays" in which Spock reverts to his savage (and intriguing?) ancestors. But to me, it was Surak who was the most fascinating. Who and what was this man, who changed the entire culture of his world? How did he accomplish these changes, and why, really? What exactly was the culture like before, during, and immediately after Surak's lifetime? That period of Vulcan history has been touched upon only lightly by fandom,in comparison with other not-immediately-related-to-the-main-character areas. Maybe it's because we've only had that one small glimpse? And that one is not even accurate, since it is an image taken from Spock's mind, who is himself a product, how many thousands of years removed, from the actual changes wrought by Surak himself. We have series on the Klingons and several stories and articles on the Romulans and Andorians, among others. But no one has deeply explored the whole Pre-Logic and early Reform period of Vulcan history. (There has been one exception—the fanzine ERIDANI TRIAD, which ran several pieces on early Vulcan.) Anyway, I feel that THE TIME OF SURAK is fulfilling a need to explore ideas about that period of history. And since we have been given so very few hints concerning it, a zine with a variety of ideas presented seemed to me to be the best way of going about it. I began the actual work of putting the zine together sometime in '77, although I have had some of the material on my hands since before that time. Finally, late last year, things began to really come together. I got more artists, and a typist, and started looking at all that I did have in the way of submissions for the zine, and realized that it was finally going to work....

Due to various circumstances, partially related to the above paragraph, I can not publish in here Leslye Lilker's "He Who Was Close To Nature". I apologize to those of you who were hoping to read that. Maybe at some future date Leslye will do the rewrite she wanted, and it will be printed elsewhere.

I would also like to apologize at this point to Stephen O'Neil, who actually submitted his article on the origins of Kataytikhe power to me around the end of 1976. I had at one point considered it for my other zine, THE OTHER SIDE OF PARADISE, but decided I didn't want to run it there, and that in some ways it fit quite nicely in with my planned TIME OF SURAK. I'm sorry that the latter took so long, but here it is, at last. (For those of you who may not be familiar with it, the term "kataytikhe" is from Jacqueline Lichtenberg's KRAITH universe.)

Regarding "He Who is Close to Nature"

A Sahaj story, He Who is Close to Nature, was to have been published in this zine.

The story was first published as a standalone zine in 1977 as a supplement issue to IDIC, and in that zine, the author mentions it was to have been published in "The Time of Surak."

The editorial of "The Time of Surak" says that the story does not appear in the zine.

The statement from He Who is Close to Nature's editorial: "'He Who Is Close To Nature' is a supplementary publication of the fanzine, IDIC. This short story was written for a pre-reformation 'zine called 'The Time of Surak' which will go into production in the summer of '77, but a limited number of copies of Nature' have been printed for the Sahaj fans."

The statement from "The Time of Surak"'s editorial: "Due to various circumstances, partially related to the above paragraph in the editorial], I can not publish in here Leslye Lilker's "He Who Was Close To Nature". I apologize to those of you who were hoping to read that. Maybe at some future date Leslye will do the rewrite she wanted, and it will be printed elsewhere."

One might assume that a number of things may have happened which caused "He Who is Close to Nature" to not be in "The Time of Surak." These reasons may have something to do with the several year time period between when the story was promised for the second zine -- differences of opinion in fanon, editorial opinions regarding the rewrite, a lack of interest and momentum, and any, all, or none of the above.

Some of the summaries below are from the Zinedex.

The editor writes in the zine:

A couple oh notes I forgot to mention in the editorial: I meant to make, a comment on the "feel" on some of the artwork and stories. In one case, it was because of the artist's personal interests and backgrounds, In the others, I don't know if it was accidental or designed. But in one look at the art, one can see the influence oh Amerindian art/design; of the Scots tribe [or Clans), and, what I really liked, in Virginia Smith's "translation", a feel like that of the Anglo-Saxon epic. She used the "alliterative mode", and that's why I did that title page, for "The Death of Samendar" the way I did. I think it's a fascinating aspect oh the various responces concerning Pre-Logic Vulcan.

This zine has extensive art. Below is a sample.