Gor is the setting for an extended series of sword and planet novels by author and philosophy professor John Norman. 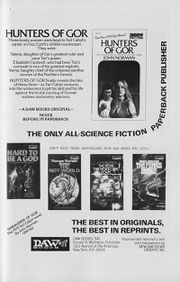 DAW Books, which published the Gor series from the 8th volume (Hunters of Gor) through the 25th volume (Magicians of Gor), subsequently decided to cease publication of the books, citing low sales. In 1996, the author cited the reason as he was on a blacklist of authors disliked by feminists.

Gorean subculture developed independent of Norman's involvement, particularly starting as a fan network after the Gor books went out of print in the late 1980s.[1] It does not have a uniform following but encompasses different groups of varying views and practices.

Gorean subculture particularly focuses on the master-slave dynamic in sexual relationships and associated forms of female submission as portrayed in the novels. Therefore, although they are estimated to compose less than 5% of the total female population on Gor,[2] training and keeping a female slave (often known as a kajira) is central to Gorean subculture. Formal slave training, slave positions and commands, as well as slave attire and beautification are practices central in Gorean subculture.

A depressing thing was the usual overload of sex-object-type costumes on women in the costume show, There were at least two "rich" spoiled heiresses as captives in Gor, very little clad and in chains, which I didn't find entirely offset by the rather funny skit called "Buckets of Gore". In addition there was an extremely vicious and sadistic presentation by two people in "Planet of the Apes-type ape costumes. [7]

A word of concern - In SHATTERED CHAIN and FORBIDDEN TOWER, one of the main themes has to do with sex in some way. Now don't get me wrong, these novels are great, but another writer whose writings I was following went too far and became obsessed with sex and his work suffered greatly: Norman's "Gor" novels. My concern is that the Darkover novels don't follow the same down hill path. [8]

"Gorean Turnabout" was a good story, despite how degrading and physically nauseating the Gor concept is. [9]

[1979]: In this new rewrite [of the pro novel "Two to Conquer"], at least the characters are real people...though some of them are very dislikable people; Pat Matthews referred to Bard di Asturien as probably the most hateful hero outside the GOR novels. I suspect that's why the book has been going so slowly; I don't like my hero enough to enjoy spending time with him! [10]

[1979]: Do not be deceived by male Treklit. Hundreds of men read the Gor, Conan, Louis L'amour series. These are the male equivalent of the "warm, dumb, soppy, stuff". I do not know if it's nature or nurture but I've noticed men seem to read/write heroic fantasy and women are drawn to romance. I don't mind good, logical, well written Trek romance but much is on par with the worst Harlequin. [11]

I wanted to drop a line to say how much I enjoyed Irma Hogg's brilliant satire "Doctor Who and Mickey Mouse Go to Gor." When I first saw the title, I expected something really terrible -- either a ghastly attempt at humor or poor pretentious writing that would take itself seriously. To my surprise, the story is magnificent. I especially loved the seduction scene between the Doctor and Minnie in the slave girl's tent. [12]

[1984]: [This art] has power, life and grace and this is despite the fact that I don't normally like types with brawny supermacho type standing over slender female crouched at his feet *shades of Gor! [13]

[1989]: Too many Kirk-enslaved stories show Kirk acquiescing too readily to slavery. Some of the A/U Kirk-enslaved stories could be entitled STARSHIP CAPTAINS OF GOR: Spock is the master and he's so SEXY, even when he is raping and beating the hell out of Kirk — and of course Kirk learns he really loves it. [14]

[1990]: The only type of story which will get an almost automatic rejection would " be a "Gor" type story where one of the partners is raped by the other and learns to fall madly in love with him (I'm not too worried about receiving stories like this in B/D fandom as I am in some other fandoms). [15]

My earliest h/c fantasies were based on Grimm's and Andersen's fairy tales. And at age 5-8 I played out such fantasies with girlfriends. (You know, stories of the kind beautiful-princess-gets-kidnapped-by-villains-and-gets-tied-up-and-tortured... we never hurt each other, the 'torture' was usually just tickling or pretended whipping). We had no conscious idea that there were any underlying sexual implications, but we never wanted to be watched by grown-ups when playing this... (quoted anonymously)

I too, spent a lot of puberty time wrestling with my girlfriends using similar scenarios. I also ran into THE GOR SERIES in my local less-than-300 book library at the same time, and really became obsessed with slavery and bondage scenarios. Once I realized they talked about *SEX* too, boy was I embarrassed... (quoted anonymously)

I discovered John Norman's Gor series when I was eleven or twelve, and I read them avidly throughout my teens, even after he began to emphasize the sex ;-), which was about the same time he changed publishers (Ballantine to Daw). The attitudes expressed by Norman's protagonists are decidedly unPC; a lot of people object to these books for the way women are treated. The most recent Gor book was published two or three years ago now. It's my understanding that Norman had a falling out with Daw, so I may never find out what happens to Tarl Cabot (who has been an outlaw for the past several books with the Priest Kings out to kill him for some as yet unrevealed reason) and Gor (which is still in danger of attack by the Kurii). (Rachael Sabotini)

LOCUS did a poll of its readers not too long ago and John Norman and his Gor books topped the 'guilty pleasures' lists for both author and series. And as long as everbody else is admitting to it, I will 'fess up to having read them happily. I think his world is well thought out in many parts - his biggest flaw for me is that he writes as though his books were serialised, and repeats things at the beginning of every chapter. (quoted anonymously) [17]

[1999]: L'histoire d'Obi -- by Lilith Sedai. You almost need to be a fan of the Gor novels for this one to give you the full impact, the whole idea of 'pleasure slaves' is integral to tha[t] universe as it is to this one but Lilith does it stunningly well ...[19]

[2013]: Ask yourself this: Has there ever been a story about a guy who befriends a dragon, finds a beautiful woman, gets laid and saves the world? Is HE instantly labeled a "Gary Stu"??? No. How about "Tarnsman of Gor"? I read that one in high school too. As a female, it messed me up. Or how about ANY Conan the Barbarian book? [20]

[2015]: We start with the really awful cover [of the Kirk/Spock print zine Charisma #1]. One of the ‘logic never happened!!’ Vulcans of Gor AU things, with a bare-chest nipple-pastie armor deal. If I were an archeologist, I’d conclude that in the past, people never experienced embarrassment. Spock’s expression indicates he’s been smacked in the face with something heavy moments before. The art is not great, but in and of itself not *terrible* – I’m more annoyed by the immense popularity of Vulcans of Gor. [21]