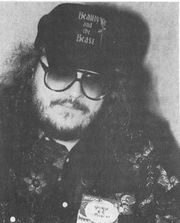 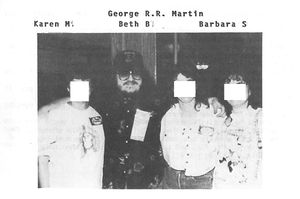 He is also a television writer. One of his books, A Song of Ice and Fire, was adapted for Game of Thrones.

Martin also wrote and produced many episodes of the 1980's series, Beauty and the Beast (TV).

Martin dislikes fanfiction, and wishes fans would not use his, or other peoples' characters. See Someone is Angry On the Internet.

Martin also spoke of his time in high school writing what was then called “fan fiction” for fanzines but he was quick to distinguish between what he wrote and what fan fiction is today:

In the very early 1990s, a Beauty and the Beast (TV) fan asked Martin about whether the only valid interpretation of a story or show was that of the original writer:

In most fandoms, there have been long standing debates concerning how we fans interpret the television shows we love. In other words, do we "read" more into individual episodes and specific scenes than were ever intended by the writers? George R. R. Martin is a science fiction novelist, as well as a television writer, which I thought would give him an interesting perspective on this particular discussion. So at a convention several years ago, I asked him if he thought the only valid interpretation of a story was that of the writer, or if the reader's/viewer's interpretation could also have validity. The gist of his answer was that he wouldn't say, "You stupid person, that isn't what I meant at all." He went on to say that the writer might have more insight, but that the reader/viewer could well pick up on something that might be In the writer's subconscious. I thought that was a surprisingly generous and perceptive answer. [2]

Martin is, among other things, the creator of A Song of Ice and Fire, a popular high fantasy book series adapted to television. The television series, Game of Thrones, is named after the first book in this series. He has written episodes for Game of Thrones. Fans have become impatient with how long Martin is taking to put out new A Song of Ice and Fire books and finish the series.

In an interview with Geek & Sundry he spoke about female readers fascination to his villain characters such as Sandor Clegane, mentioning SanSan shippers at the end.[3]

It appears Martin had a cameo in "Beauty and the Beast," one for the episode "Terrible Savior." However, in April 1994, he said: I made my on-screen appearances in “Fever” [4] and “Bluebird.” I was not in “Terrible Savior." [5]

Martin was also the writer of thirteen Beauty and the Beast (TV) episodes.

Beauty and the Beast episodes Martin wrote, printed in the Delecon #2 program book, a con at which Martin was a guest of honor

Beauty and the Beast Interviews

Martin at Beauty and the Beast Cons

From a 1994 online discussion with fans and Martin:

Various people have asked me about appearing at cons. Well, there are no B&B cons on my schedule right now. I don’t have anything against them; just haven’t been invited in a while. The last B&B con to make me a guest was that one on the cruise ship, a year and a half ago, whenever it was... and they cancelled me (but not the cruise!) when they did not get enough registrants. The truth is, and I try to be realistic about this, that most cons have limited budgets and can afford only so many guests, and the people who run them know damn well that the attendees would rather see actors than writers.[6]

Fan Comments about Martin at Beauty and the Beast Cons

George R.R. Martin was a guest at the Archon Convention in St. Louis, MO on July 12, 13 & 14. During an informal discussion in the (appropriately enough) St. George room, George answered many questions concerning the upcoming B&B movie. He told us that he met with Koslow, Gordon and Ganza at a very informal dinner meeting to discuss the movie script. There is nothing concrete right now on the movie. He mentioned that Mr. Koslow doesn't think he'll get the financial backing as easily if Linda isn't in it and he wanted to meet with her about doing the movie. George was under the impression that Mr. Koslow didn't know about Linda's feelings on doing the movie because at that point he was still talking about meeting with her agent.

What I found interesting in this meeting with him was that whenever there was a lull in the conversation, George would look at the three of us, obviously the only fans in the room representing B&B at this science fiction convention, and ask us what was happening in Beauty and the Beast fandom. He seemed very interested in the status of our fandom. We told him about South of Oz and how great it was and let him know that this fandom is still very much alive! He was disappointed that his guest appearance on the "Celebration of Life" cruise was cancelled and he asked how it went. We filled him in as best we could.

I think George is a very interesting person and fun to talk with and should be invited to more B&B conventions! [7]

George R.R. Martin had a one-hour panel on B&tB [at Archon Convention] , during which, to his credit, he divulged nothing of the two-hour midseason premier. Here are some tasty morsels he did throw us however:

George admitted that B&tB had appealed to three types of audiences:

a) The SF fantasy audience, which is attracted by the tunnel society and how they live.
b) The romantic audience, drawn by the Vincent/Catherine relationship.
c) That hormone-driven audience which lusts after Vincent's thighs.

Though most people may fall into more than one of these three groups, George said a fourth audience, one that CBS always intended the show to appeal to, never caught on-the action adventure audience. He said that that audience was still a target and that the writing would reflect CBS's attempt to draw more young men. (Hmmm...)

For me, one of the most interesting highlights of George's panel was his discussion of network politics. He weighed the pros and cons of waiting for January to premier, versus grabbing the first available air date in October or November they're offered and putting B&tB on the air ahead of schedule. In essence, George said that the benefit of putting B&tB on early is that they may be able to get more episodes ordered. On the other hand, airing in a timeslot left from a show dumped because only 5 people watched it was not exactly the best move for B&tB. George personally favored waiting for January, when CBS is shuffling their entire schedule and B&tB had a shot at a more favorable timeslot, not to mention the ability to launch a decent promotional campaign.

George also talked about Nielsons and, with a great deal of very vocal audience participation, agreed that through it wasn't the most accurate system, it was the only ones the networks listened to at the present, and it was almost impossible to dispute the ratings.

Viewers for Quality Television was an influential organization, he went on to say, but he really didn't believe that CBS cared a fig for what the viewers thought or wanted. The bottom line for the networks is money. That means sponsor time and ad time. Television, he reminded us, is a business first and foremost, and though CBS may want quality shows on the air, their reasoning is less a matter of responsibility to the viewers to put on intelligent shows, and more their wanting to show everyone that their network is as good as anyone else's.

Sometime later that Sunday afternoon, I and some other fans had the good fortune of having George join us for an informal chat. As a continuation of the above conversation, George told us that negative feedback holds far more weight with the network than positive feedback. Nightengales, was cancelled after countless enraged nurses pressured NBC. However, George contended that our positive response does not have the same kind of influence.

George also admitted that they only had three scripts written as of that date. He said that he was flying back to Burbank that night and they were going back into production in the next few days. He laughed when we kidding him about the "close calls" Vincent and Catherine were having this season, their faces, noses and lips microns apart before their heads veered off like two planes avoiding a midair collision.

All in all, it was a time to gather information, hear lots of rumors, gossip and speculation, and engage in some deep and satisfying conversation about love, madness, revenge, psychological intrigue, and the future of our favorite fairy-tale come-to-life. [8]