Beauty and The Beast: The Newsletter

Beauty and The Beast: The Newsletter is a Beauty and the Beast fanclub newsletter and letterzine published out of Cedar Rapids, Iowa. 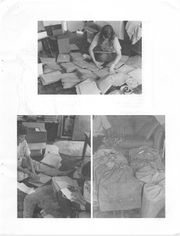 It was published four times a year: March, June, September, and December.

The first issue was published in March 1988 and ended in June 1990. The newsletter spanned from the end of the first season to two months before the show was cancelled. As a result, the letters, fan discussion, and translation of information doled out to fans by TPTB reflected a cycle of excitement and optimism, fear and anxiety about characterizations and show cancellation, fervent mobilization to keep what they loved, and finally, for many fans, the crushing defeat and sense of betrayal that fractured the fandom.

This zine series was informally continued in Passages, which began the month "Beauty and the Beast: The Newsletter" ceased.

See these subpages for details about individual issues, including quoted opinions and summaries of fannish views on topics current then, and now.

Please have patience with us. We are just trying to do the best that we can to give you something extra that will compliment the series, provide a vehicle for you to express your feelings, and to put you in touch with one another, so that you know you're not alone in being addicted to this wonderful series.

The newsletter contains a small amount of fanart, updates from TPTB, fan poetry, commentary from the editors, and writers, and showrunners. Some issues have long and meaty letters of comment, and others did not.

Each issue contained one, sometimes two, interviews with people who were officially involved in the show. Many of these interviews included casual photos.

This, of course, was no guarantee that TPTB noticed or read their offerings, but there are mentions in the club's newsletter that some of them did. One example from the third issue's editorial: "We have a request from George R.R. Martin; "Why don't you do a poll of your membership? Have everyone vote on their three favorite episodes, and their three least favorite episodes, use a point system and publish the results. The totals could be fascinating, and would give us writers an interesting measure of what the fans respond to..."

Sometimes the information offered to fans was reassurance about direction, casting, and characterization, things many fans were hungry for. These statements were almost always along the lines of official publicity. Fans were also given little details of things that occurred on the set, something that fostered connections between them and TPTB. example of The editor told fans in the fourth issue: "Word has it that Roy "Father" Dotrice is deadly with grapes. During a recent banquet scene on the set, Roy started a food fight between takes, with Ron Perlman was acting as lookout for Roy. David "Mouse" Greenlee was reported to have been walking around the set the other week muttering, "Mouse no die. Mouse got contract!" David has signed a contract to appear in fourteen episodes this year." Another example was the interview with, Jay Acovone, one of the actors. The interviewer asked Acovone: "Could you tell me about an incident or two that happened on the set that would give our members the feeling that they're receiving inside information that no one else has, perhaps something that will also teach them something that goes on behind the cameras as well?"

While "official" eyes and comments on this newsletter thrilled many club members, this coziness likely had a cooling effect on their discussion. TPTB's attention and suggestion that fan comments directed decisions about the show also complicated things, especially later on when the show began to take a turn in ways many fans disliked.

Despite the editor's statement in the first issue that fan's comments need not be "filled with praise, or its actors (although one or two lines or a paragraph or two is appreciated)," when things got too heated in later issues due to changes in the show, some fans scolded other fans in letters. These letters suggested and sometimes demanded, that they do not criticize the show as these complaints would hurt the TPTB's feelings, make fans appear imperious and critical, and scare sponsors away. It was often stated that the future of the show was in the fans' hands and their comments in this newsletter had real impact. One of many examples are the comments in issue #7.

Also See The Classic vs. Season 3 Split and The Beauty and the Beast Wars.

Two examples in this newsletter illustrating the subject of the well-behaved fan, and of fans policing themselves and others, are Do you really want to be a "FAN"? (June 1988) and The Lifeline Letter (June 1990).

See "Your Club and How It Works". Embedded in that essay are more detailed descriptions of the newsletter.

We accept the following for publication in this newsletter: POEMS: typed, double-spaced, limit of 3 pages in length.

LETTERS OF COMMENT: may be handwritten (printed very neatly - this staff does not read minds or do code deciphering) or typed, limit of 8 pages, double-spaced.

ARTWORK: black and white only, no larger than 11x17, sufficient monies for packaging and postage must be included if you want it returned. Excellent photocopy preferred in 8x11 size.

ARTICLES/REVIEWS: typed, double-spaced, limit of 8 pages in length, (local libraries often have typewriters you may use.)

ADVERTISEMENTS: must be typed, if in flyer format, it must be black on white, and no larger than 8x11. We reserve the right to refuse to publish any ad which does not meet with our or the show's philosophy and/or copyright laws.

All submissions should include a stamped, self-addressed envelope so that we (the editorial staff) can acknowledge receipt of your submission in a timely manner.

Regarding the Newsletter's Title

Despite this effort to change the club's name, Beauty and the Beast, to something else, the original name remained.

From the second issue:

Currently we are a nameless club for the television series Beauty and The Beast. We would like to have a name that can be used on the cover - and to distinguish us from all the other fan clubs that will probably be springing up. It will also be used to register our club with the association for fanclubs.

Prize??? You have the pleasure of knowing you named this club.

From the third issue:

The newsletter will stay named Beauty and the Beast - The Newsletter. We will however be using your entries for headings/titles of the various areas within this newsletter. Candleglow for member contributions. Chamber Musings for the interview section. Tunnel Visions for our episode guide, Pascal's Pipeline for the advert section. Heard It Through The Pipeline will be the penpals and/or bits and pieces column. Whispering Gallery will have news items, upcoming conventions, and what's happening with the actors/writers.