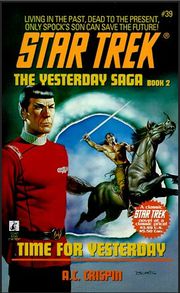 Note: Later reprints of these books were retro-titled on the covers as "The Yesterday Saga".

From the book: "Time in the galaxy has stopped running in its normal course. That can mean only one thing -- the Guardian of Forever is malfunctioning. To save the universe, Starfleet Command reunites three of its most legendary figures -- Admiral James T. Kirk, Spock of Vulcan, and Dr. Leonard McCoy -- and sends them on a desperate mission to contact the Guardian, a journey that ultimately takes them 5,000 years into the past. They must find Spock's son Zar once again, and bring him back to their time to telepathically communicate with the Guardian. But Zar is enmeshed in troubles of his own, and soon Kirk, Spock, and McCoy find themselves in a desperate struggle to save both his and their world."

Another, more lengthy plot summary is at Memory Alpha.

[1985]: TIME FOR YESTERDAY, the sequel to YESTERDAY'S SON. The proposal I submitted passed muster at Pocket, and is now under re view by Paramount. Karen Haas, the new Star Trek editor at Pocket, liked it very much. She is quite nice and seems very conscientious in her approach. Fo rany fen who are typing away on the ultimate Trek novel, she says she would prefer three chapters and synopsis submissions for consideration, rather than entire ms. (As usual, Trek ms. keep pouring in from all sides, and response time will continue to beslow. I gather she spent the first two months in the job just digging out from under a staggering backload of submissions that had accumulated.) I'm very excited about TIME FOR YESTERDAY, and feel it will be a much better book than YS — after all, YS was the first story I ever attempted, and after five books, my writing has matured considerably. I offer fair warning, however, to those who disliked YS to please save their money. Seven years of writing may have smoothed my style, but my basic perceptions of the Star Trek characters, my sense of humor, and what I like to see in Star Trek stories — adventure, emotional involvement between the characters, and verisimilitude with the aired Trek universe — remain unchanged from YS to now. Briefly, readers who liked YS will probably enjoy TIME. Those who didn't, won't. I can't say much about the storyline itself except that it takes place for Zar some twenty years after his return to Sarpeidon. Less time has passed for the Enterprise characters. (Time is, like all things, relative!) This book will be considerably longer than YS, more somber in theme, and will feature a woman in one of the leading roles in addition to several new characters, plus a return appearance of an old favorite. [1]

[1987]: The sequel to YESTERDAY'S SON, TIME FOR YESTERDAY, is  finished (at last!). Now if it just makes it through Paramount approval! I'm currently going through it one more time, with the intention of cutting 10,000 words out of it, if at all possible. I ran a little over word-count as well as over-deadline. (107,000 words, when Pocket wanted no more than 85,000. I'm hoping they'll let me "fudge" 5,000 or so words.) When I first signed the contract for TFY, Pocket wanted 90,000+ words, but that was before the advent of the "big" books, like ENTERPRISE and STRANGERS FROM THE SKY. Now Pocket wants to make a more clear-cut difference between the "regular" novels, and these "big" novels, which run upwards of 120,000 words or so. It's a marketing decision, so they can charge more for the "big" novels, and (in theory at least), folks won't object to paying it, because they'll be able to see at a glance that they're getting more for their money. The "big" novels will be coming out every so often, and, as planned, will be bigger in "scope," also. As I understand it, that means they're supposed to be more universally appealing, dealing with topics such as the first voyage of the Enterprise under Captain Kirk, and Spock's service with Christopher Pike (Dorothy Fontana is supposed to have dibs on writing that one. I don't know whether contracts have been signed or not).[2]

At any rate, TIME FOR YESTERDAY is due for release in June 1988. I had a lot of fun writing it, though it was hard work, too. I wound up doing a ton of research on black holes and space-time physics (I was an English Lit major in college, so you can imagine how easy that was for me!), and also research on ancient and medieval weapons, armor, and battle tactics. (Probably I shouldn't have admitted that. There are bound to be some physicists and scholars among INTERSTAT readers who will now be gunning for me when the book comes out, eager to point out my errors!)

The cover art is done, by Boris, and when a friend of mine, Esther Friesner, took one look at it, she burst out laughing and whooped — "Oh no! It's 'Vulcans of Gor!'" I had kiddingly told Boris that TFY would be a book where he could indulge himself and put a naked barbarian with a drippy sword on the cover and it would be right in keeping — and, by gum, that's what he did, so the last laugh is on me. It's certainly different, and thus bound to attract a lot of attention.

I'm still under contract for another Trek book, but at the moment, I'm "trekked-out" and have no idea what it will be about. I may try reviving the old synopsis that I pulled when Paramount demanded changes I wasn't willing to make. It was called TO STEAL A STARSHIP, and would have been a lot of fun. (What would be really fun would be to set it after Star Trek IV - The Voyage Home — hmmmm, that's a good idea. I may run that past my editor to see what he thinks...) [3]

This novel is a sequel to the earlier novel Yesterday’s Son which, in turn, is a sequel to the third season Star Trek episode "All Our Yesterdays." It answers the question for anyone who wonders what happened to Zar, the son of Spock and Zarabeth, who they had rescued from the Sarpeidon Ice Age, but later returned to the Northern Hemisphere of that world, realizing that he was to be instrumental to the rapid development of the civilization there.

Fifteen years later, Admiral Kirk and Spock learn that many stars, including nearby star, Alpha Centauri B have been engulfed in waves of time displacement causing them to age rapidly. It is estimated that if this phenomenon is not stopped within the next ninety days, the damage to the universe would be irreversible. The source of the time distortion waves was traced to the planet of the Guardian of Forever. The Guardian appeared to be malfunctioning and was no longer responding to questions. Spock suggested that maybe a telepath should be used to contact the guardian.

As Zar was a telepath who had previously contacted the Guardian, Spock, Kirk, and McCoy go back in time to Sarpeidon to retrieve him. They encounter him twenty years later as a ruler of a small but technically advanced clan about to engage in battle with an alliance of enemy clans. The priestess, Wynn, who is the daughter of one of the enemy chiefs, has predicted his death in battle and declares that the alliance will only be denied victory if "he who is halt walks healed" and "he who is death-struck in battle rises whole." The "he who is halt" refers to Zar who currently limps due to a leg injury suffered in a previous battle. To increase his clan’s odds of survival, Zar marries Wynn, forcing her father to change sides. While the marriage was originally for "state" reasons, the couple discovers they have a lot in common, including telepathic powers and the fact they had previously lost a spouse and child.

Kirk, Spock, and McCoy convince Zar to come back to the future with them so he can contact the Guardian. While there, McCoy heals Zar’s leg so he can walk normally again, satisfying the first part of Wynn’s prophecy. Zar returns to the past to fight the battle. Spock also returns and is able to deflect the "death blow" meant for Zar so that it is not fatal. Spock puts on Zar’s armor, and shows himself to the army who believe he is Zar, fulfilling the second part of the prophecy. Zar’s army wins the battle. Spock returns to the present, leaving Zar in the care of his wife. The end of the novel includes a bridge to events depicted in Star Trek: The Wrath of Khan.

The novel is well-written. Characterizations are very good. The scenes of McCoy treating Zar for his injuries are believable. It is obvious that Zar himself has Vulcan personality characteristics, with his references to logic. Admittedly, the novel includes the time-worn plot device of Captain Kirk and his crew saving the universe. Nonetheless, it is a very interesting read and well worth a reader’s time, especially one who read Yesterday’s Son and wants to learn what happened to Zar. While this novel could probably stand on its own, it makes much more sense to readers who have seen the episode "All Our Yesterdays" and read Yesterday’s Son. In fact, this novel is a "must" read for fans of Spock, especially for those who enjoyed "All Our Yesterdays". [4]

While fans wrote plentiful reviews of many other pro books for Interstat, there are no LoCs of any substance there which comment on this book. Both books are reviewed at tor.com by Ellen Cheeseman-Meyer, with many comments.

After the strains of Yesterday’s Son, Spock and Zar are desperately in need of the emotional closure that only a sequel can provide. That sequel is Time for Yesterday. Crispin wrote an introduction to this book that could have easily been titled “Why my Star Trek story has been published by Pocket with a Boris Vallejo painting of Spock’s shirtless, sword-waving offspring riding a unicorn through the Guardian of Forever on the cover, and your Star Trek story will probably only appear in fanzines.”[5] Crispin has done a lot for writers. I’m sure the intro was meant as an early part of that advocacy work, even though I read it as a crushing blow to my childhood dreams. Time for Yesterday is the kind of book you read to dull the pain.