A flyer in Warped Space #24 says it is a "satire-ridden packet of parody, science fiction, poems, humor and, of course, the ever-popular Star Trek fan-fiction."

From Valenza's comments in Snow on the Moon:

There is one story which should be in [Snow on the Moon] but which, I discovered when preparing it for publication, would have been as long or longer than this volume itself, and that is TEI DAMNINEN. TD was published in Tettrumbriant as a short visual. It was chopped and mangled to death, for the original was done in comic strip form. It was three hundred pages long — that's about two-thousand frames. I was putting it into novelization form, and realizing that a picture worth a thousand words, at the very least.... But I wish it were in here, because it covers a lot of ground in how Thobo and Fara became such good buddies.

Tetrumbriant 2 (v.1 no.2) was published in June 1974 and contains 50 pages. It is part of a novel called "The Phoenix" by B. Fishman. The front cover is by G. Best, the interior illos are by L. Gould, D. Lomazoff, J. Oeschger, and Anji Valenza. 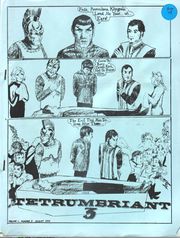 Tetrumbriant 3 (v.1 no.3) was published in August 1974. The front cover is by Anji Valenza. The interior illos are by Germaine Best and Joel Silverstein.

In any event, PROBE has come a long way in just a year from the days of bad artwork and fifty pages of sometimes-barely-readable Xeroxing. Some of the best suggestions for improvement have come from friends and associates who proved to be our sharpest critics… the one-and-only Gemaine Best (with her now-famous — and infamous — fanzine review column, "The Hacking Block"). And the quality of PROBE continues to steadily improve, so we just look back on PROBE 2 as proof that every fanzine is allowed at least one bad issue (for instance, take TETRUMBRIANT 3...Please!). [1]

Tetrumbriant 4 (v.1 no.4) was published in December 1974. The front cover is by Germaine Best. The interior illos are by Anji Valenza. The back cover is by Allan Asherman. 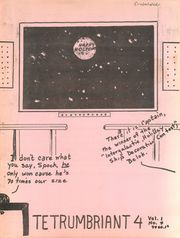 back cover of issue #4, Allan Asherman 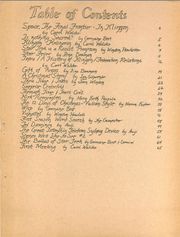 table of contents for issue #4

Tetrumbriant 5 (v.2 no.1) was published in February 1975 and contains 60 pages. The front cover is by G. Best. The interior illos are by Alan Andres, L. Gould, D. Lomazoff, and Anji Valenza.

Note: the table of contents is not complete and does not match the contents of the zine regarding page order. 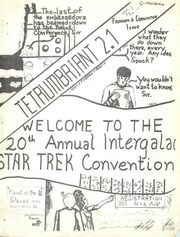 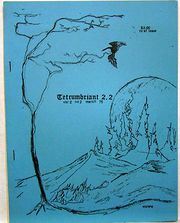 Tetrumbriant 6 (v.2 no.2) was published in March 1975 and contains 49 pages. The front cover is by Carol Walske. The interior illos are by G. Best, L. Gould, and D. Lomazoff.

Tetrumbriant 7 (v.2 no.3) was published in July 1975 and contains 82 pages. The front cover is by Alan Andres. The interior illos are by Germaine Best and David Lomazoff.

There were 150 copies published. 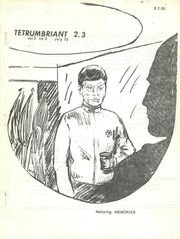 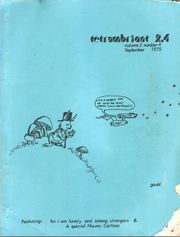 Tetrumbriant 8 (v.2 no.4) was published in September 1975 and contains 76 pages. The front cover is by L. Gould. The interior illos are by G. Best, Gee Moaven, R. Nieves, and Anji Valenza.

The editor says that pages ("Foreward and Afterward" from this issue) were omitted from the last issue:

Sigh! Its not my fault that pages 9 and 10 were omitted from the last issue of Tet. And, it's not the author's fault either. You won't believe this, but a monster got them. That's right. No, really. A monster did get them. It's the monster that plagues all zine editors, business people and anyone who has written information to transfer. He's the monster that devoured Cleavland [sic], sabotaged New York, and makes California miserable. Yup, its the Postawful. Again. I've given up. Somewhere, deep in the bowels of this creature, lies a copy of every zine printed in fandom, 85% of my postcards (including all, but 3, that I sent from England last year), and some copy I intended to send to GRUP. Delivering Anji's two pages one month later than mailed was not by far its greatest attack on me. No. After all, Anji lives only twenty blocks away from me. Thirty-one days is a reasonable time limit to reach that distance. One day for each block and the remainder to equal the postage. Ye all, right. The extra day is for the mail carrier's hernia.

Also from the editor:

I would like to apologise to Marybeth Pospula, Gee Moaven and the rest of my readers for both the poor typing and poor printing In the story FOR I AM LONELY AND AMONG STRANGERS (part 2).

Several calamities befell this issue in its final stages. My fantastic Gestetner machine, that was still under warranty, took this as the perfect opportunity to die. Multiple repairs slowed production, not to mention, eating paper, copy and ruining stencils. This is the most expensive issue yet to be printed. After a temporary patch job, designed to hold until completion of the issue, my golden-haired-angel of a typewriter died two days before I sliced my index finger to the bone (Chapter 2.4 of the perils of Pauline), hence the poor, light typing on several pages of this zine. The only thing that didn't happen was the death of my electro-stencil, because it died in August... I apologise to Marybeth for the abrupt change In type in her story. My father [name redacted] was kind enough to complete the work (Including layout) while I awaited the removal of the stitches. The Elite type is his. Thanks. Gee, I apologise for your lead illo. It was the best we could do at the time. I don't think I did it justice.

Readers, this issue is late, its badly printed in several places, it doesn't do my contributors the justice they deserve, therefore, it doesn't do you justice either. This won't happen again. (I hope). No excuses, just fact. 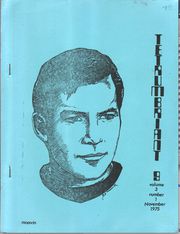 Tetrumbriant 9 (v.3 no.1) was published in November 1975 and contains 80 pages. The front cover is by Gee Moaven. The interior illos are by L. Gould, D. Lomazoff, and Anji Valenza. 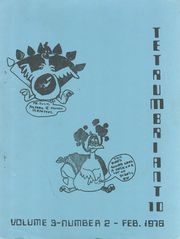 Tetrumbriant 10 (v.3 no.2) was published in February 1976. The front cover is by L. Gould. The back cover is by Gee Moaven. The interior illos are by D. Lomazoff and Anji Valenza. 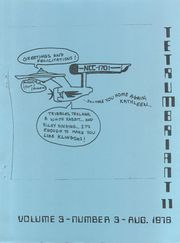 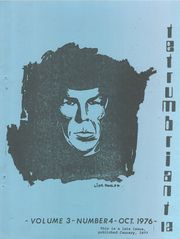 There are, however, several stories I should like to recommend. First in #12, you'll find 'I've Got Friends,' a short warning against super critical reviews, and 'Nemuzuth: The Juggler, a fascinating novelette that has to be read to be appreciated. I look forward to reading more of Elise Grasso's work. Here is someone who has gone through an awful lot of trouble to create believable alien culture. Also included is 'The Swords of Revlon,' by P.R. David, a funny sword and sorcery story that sounds like something I've read before... [2]

There are certainly a lot of good zines out there that I don't even know about. Tetrumbriant is one of them... Tet is a general zine with ST, SF and occasional stories from UFO and Space: 1999. The humor has a nice sting to it, the poetry is good to excellent, and the short-shorts are very much to the point. The artwork suffers a bit from the printing process, as on occasion, does the text, but what good mimeo zine doesn't have an occasional problem of this sort. For some odd reason, I find it difficult to direct specific criticisms toward any of the stories, so all I can say is that this zine has to be read to be understood. 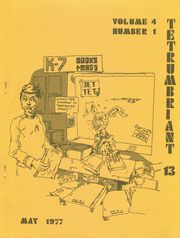 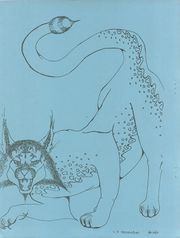 Not Star Trek, hardly even SF, TET reads a lot like a typical college experimental fiction magazine. Like such a publication, the contents may occasionally be very good, but they will never be quite what the general reader expects. 'Mission Tomorrow,' a UFO story and 'Reflections' are based on other TV shows, although some of 'Reflections' sounds like it was translated from the French -- the odd vocabulary, the passive voice. 'Outcast' is probably the best of the zine, or at least the best trek story, as it is the only trek story in the zine. An early Sarek/Amanda story, it gives a rather probably explanation why they left for Vulcan rather than stay on Earth. Its only unfortunate aspect is the characterization of everybody, save Sarek, as 20th-century New Yorkers. I have a pretty lousy Goreyesque piece in this ish, and Winston Howlett a rather funnier "Ordeal." For the price, TET's pretty good. Contents - 3 Graphics - 4 $ Worth - 4. [3]

Read 'Ordeal,' a short by Winston Howlett that has his usual wicked twist at the end. Next is 'Outcast,' by Courtney Taylor, another view of Amanda's problems surrounding her marriage to Sarek. Painful, but quite believable. On the other hand, if it is a chiller you want, read 'Portrait of a Future,' by Priscilla Marco. It concerns of possible solution to the problem of racial friction. I recommend this zine for those who like to stretch their minds around interesting concepts expressed in often unconventional ways. I consider Tet a welcome addition to my skimpy zine library. [4] 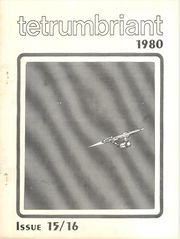 The Best of Tetrumbriant 1 was published in December 1976. It has a front cover by Anji Valenza, a back cover by G. Moaven, interior illos by G. Best, Gould, D. Lomazoff, and Carol Walske. It contains the Walske and Marder story from issue #4, "First Meeting." 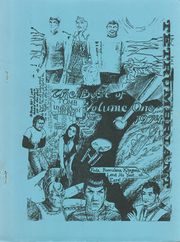 front cover of best of issue #1

The Best of Tetrumbriant 2 was published in January 1978. 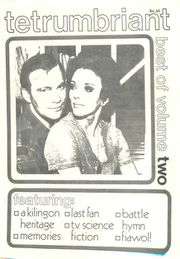 front cover of best of issue #2