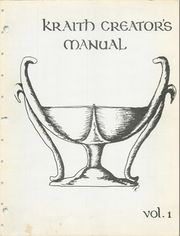 Kraith Creator's Manual contains 77 pages. It is "The 'bible' of the Kraith Universe to help new contributors craft their stories into the main timeline(s)." [1] The second edition is from April 1975[2] Volume 2 has not been published.

The print zine is "Fondly dedicated to the IBM typewriter repairman who never did come to fix the n, t, and h keys that don't type until they have been used several hundred times, the a key that sticks, and the ribbon holder that doesn't."

From the Editor's Foreward in the Print Edition

The contents of this 'zine are a hodge-podge of articles and letters designed to ellucidate some of the more elusive background ideas of the Kraith Series. Like Tolkien, I can say that Kraith has "grown in the telling". When I first offered to publish the Series, it contained 5 written and 3 proposed main tories and about 5 sub-stories. Now, it seems that there are hundreds of sub-stories, and I'm even being asked to publish letters At one point Jacqueline estimated that Kraith would by 500,000 words when it is complete. I am beginning to doubt that it will ever be complete. If only half of the proposed stories are written, the wordage in Kraith ought to top a million words in the next few years. I can only hope that the cataclysmic rise in the number of Kraith stories being written levels off soon, or I will not be able to publish all of it. If the letters I receive are any indication of the intrest in Kraith, there is an urgent need for a means of disseminating Kraith to the people who don't normally receive their Kraith through letters. I am continually being asked questions, when the answers are already available in articles that I own, but they just haven't been published yet. Hopefully, Kraith Collected and the Kraith Creator's Manual will be able to keep up and satisfy this need. Since I have started a (hopefully) self-perpetuating fanzine fund, as long as there is Kraith being written for fan publication, I'll be able to publish it at some time or other.

From the Licthenberg's Open Letter

Kraith was originally conceived as a counter statement to the most prevalent type of fan fiction presentation of Vulcan. It seems that fans could not stretch their minds to see Vulcan in any other light than as anthropomorphic cripples deprived of 'normal' emotional outlets. True, that aired ST did leave this question open. They presented data, but in most cases did not interpret it for you. The obvious interpretation which Hollywood no doubt wanted us to make was the Vulcans were simply humans with exotic customs. However, if we view the tv screen as a window into an actual tomorrow and attempt to observe like good xenologists, we MUST NOT project our own human-centered concepts onto genuine aliens. Kraith attempts to point out several other valid interpretations of aired ST's basic data.

For more, see May You Live Long and Prosper: Kraith Open Letter.

KRAITH CREATOR'S MANUAL contains a number of extropalative articles and explanatory essays which throw a deal of light on the KRAITH universe. The provocative, contoversial KRAITH view-point of Vulcan and the Fed eration will not appeal to everyone. It is, however, an attempt to deal with an alien Vulcan culture -- an important adjunct to the library of any Trekfan. [3]

[It] is self—explanatory. It is a guide for those who want to write and submit Kraith related stories, or who simply want a more in—depth understanding of Kraith. It contains character development, theoretical background, which is done in great detail, story detail background, story outlines and a Kraith Exchange — Letter file, Creator's Roster and recommended background reading. In my opinion it's a must for an essential understanding of the Kraith Universe. It's an excellent piece of work —— I especially liked Vulcanur Semenics. Anyone can become a Kraith Creator, just write a story and you're a Creator. [4]