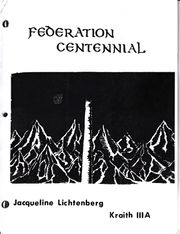 cover (this is a xerox copy)

It is volume 3 of the Kraith series. It is also reprinted in Kraith Collected #2.

'Federation Centennial' is an original Star Trek novel (over 50,000 words) by Jacqueline Lichtenberg. It will be available in a limited First Edition, with the possibly of an additional (but also limited) Second Edition.

'Federation Centennial' is Kraith IIIA, and continues with the Kraith series explanation of Spock's opinion of humans and his reason for studying earth's history. 'FC' examines some of the obvious prejudices against nonhumans within the Federation. Also features discussion of relationships of McCoy and Kirk to Spock's family."

With the action set against the ambassadorial conference on Babel, the author examines the various alien races comprising the Federation. Sarek is under suspicion of murder, Amanda is attacked, and the entire populace of Babel seem to be at each other's throats. Does this signal the end of the Federation on fear and suspicion of racial prejudice among the alien groups. Or have the Klingons and Romulans designed a complex plot to destroy the Federation from within? Read 'Federation Centennial' and find out!!

'Federation Centennial' will be out any time now. To find out more about this zine... please contact... Reginna Marvinny.

As the Standalone Zine Novel

"Federation Centennial" is an original ST novel (over 50,000 words) by Jacqueline Lichtenberg, author of the incredible Kraith series of which FC is an integral piece. This fascinating 'fanovel' will be available in an extremely limited First Edition on or about April 15, 1972. The author urgently solicits the comments of each and every reader in order to improve the text for presentation to Bantam. Such a presentation could change Bantam's Star Trek policy by awakening to the literary possibilities written by fans and published in Trekdom's fenzines. Learn: Spock's opinion of humans (brace yourself!), what Sarek is really like, and the facts on Federation prejudices against non-humans. And featuring: a Vulcan ceremonial restaurant, an explanation of the fire pot in Spock's quarters aboard-ship, the interpretation of Spock's 'Vulcan Scientific Legion of Honor,' and Elaboration of Sarek's relationship to Amanda and Spock. All this and fiction, too. Remember this is a limited edition and will not be available to all of Strekdom. So, reserve your copy, send an SASE now. Copies will be reserved on a basis of earliest postmarked letters. Send you SASE now to Regina Marvinny.

As Part of Kraith Collected

From the forward, by Debbie Goldstein, of Kraith Collected #2:

"Federation Centennial is not one of Jacqueline's recent efforts, so if any of you are expecting great. exciting, new revelations about the Kraith universe. forget it. There aren't any. Federation Centennial was conceived and written as an acti.on! adventure novel aimed at a commercial market proving to the people who publish such things that pro-ST fiction did not have to consist of script re-writes. But due to contract limitations, it can't be published pro. Since Federation Centennial was written for the general reading public and not for a hard-core group of Kraith devotees, it is somewhat tones down from Jacqueline's usual style. Also, it was written well before the Lichtenberg/Marshak alliance and subsequent blooming (if you'll forgive the expression) of radical ideas. Personally, it has always been one of my favorite Kraith stories, and I am ecstatic that it is, finally, in print.