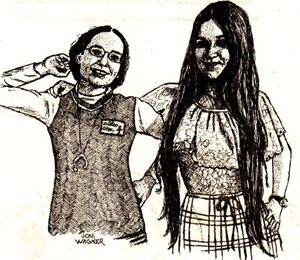 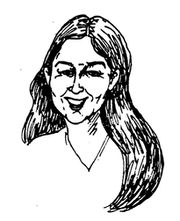 a caricature by Gordon Carleton of Carol Lynn, printed in Paladin #1 in 1980

Carol Lynn has, as she herself describes it: "[I've] been involved in fandom for (mumblelty) years. Fandom has not yet destroyed her memory, because she clearly remembers the days when owning a mimeograph machine was considered the apex of technology for fan publishing...she published one of the first professionally offset printed zines, Kraith Collected in 1973." [1].

Her MUNCLE fanzines Blood Agent and The St. Crispin's Day Society won a FanQ awards in 1996 and 1997 respectively.

In addition to her efforts as a fanzine publisher she also writes LOTR gen fiction which has won several Middle Earth Fan Fiction Awards (MEFA). Her LOTR costuming skills won her Best in Show at Mediawest in 2008. [2]

I was seventeen before I ran across Have Space Suit Will Travel again and realized that it was by Heinlein. In the intervening years I'd read all the s-f I could get my hands on, written TV scripts (none for sale), foisted s-f books off on credulous friends, hawked Save Star Trek petitions in school corridors, and wrote threatening letters to NBC. (I know, I know, but I had never heard of Bjo then, much less her rules for conducting a write-in campaign.) My parent and teachers were certain it was a phase I'd grow out of because momentous things were happening. High school and Star Trek ended at the same time. I faced college and the future assured that from now on things would be different.

They were. I had a lot more free time to read s-f in and Star Trek was on seven days a week. I also met for the first time people who were as enthusiastic about s-f as I was.

The second quarter of my freshman year at Wayne State University I took a speech class. My partner for the introduction speech decided to make me out as a nut case; after all, I still watched Star Trek reruns. Immediately after class I was accosted and thrown up against the wall by a short, brown-haired girl who demanded, "Have you read SPOCKANALIA?" "Spock-a-what?" "I'll bring it tomorrow." The next day Margaret Basta dropped two SPOCKANALIAs, one WARP NINE, the incomplete librettos for La Tribbiata and Lord of the Tribbles, and some ST Enterprises scripts in my lap. Fandom had found me.

Margaret, and Laura too of course, were in a local s-f club, the Wayne Third Foundation. Within three months I had been elected secretary and was helping with the club fanzine that came out every two weeks. That summer I started going to conventions: Fan Fair II in Toronto (Asimov, up close!), Noreascon in Boston (Worldcon!), and then the first New York Star Trek convention where my costume ended up in TV Guide. (I was the vampire cloud and won most beautiful, in case you're curious.) On returning to Detroit we found that a George Christman from Ann Arbor had formed an organization called the Star Trek Association for Revival, but he had never heard of fandom. When George was unable to continue S.T.A.R., we gladly took it off his hands, and I became a S.T.A.R. vice president.

Unfortunately the Basta sisters were now so busy that they didn't have time to take on another project, one that had become near and dear to my heart, the collecting of the Kraith stories into one volume. Until now I'd been helping with Seldon's Plan and Babel, but I had never considered one of my own. With the help and encouragement of Debbie Goldstein, whom I had met just before the New York con, I published Kraith Collected Volume One in November, 1972.

Between then and now I've run conventions, helped at conventions, met hundreds of nice people, and my mother has ceased expecting me to grow out of s-f. When she sees me toting 13 boxes of magazines into the basement, or resignedly sets up a card table to eat an because the dining table is covered with half-answered mail, she only sighs. To which I can only reply, "FIAWOL!"