Are you looking for Warp, the German clubzine? Or Warp Factor, a zine that was originally called "Warp Nine.

Warp 9 is a gen Star Trek: TOS anthology that includes some content from other fandoms. It has the subtitle: "A Star Trek Chronicle." It was edited by Dee L. Mauser, Susan C. Passe and Barbara Marczak. Art is by Caroline Ager, Carol Lee and DLM.

The zine was meant to be a one-shot but the editor speculated on smaller continuations: "WARP 9 is a one-shot, but in the future Dee is considering a shorter, monthly or semi monthly zine which would include general s-f material as well as ST." [1] 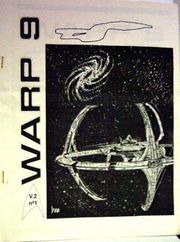 cover of v.2 n.1, perhaps one of the later smaller issues?

We believe in tomorrow, and the good things tomorrow will bring. We cannot believe that mankind is headed toward self-destruction, no matter what predictors of doom might say. We prefer the Star Trek way -- unity, peace, great exploration, and adventure. Of course we realize that Star Trek may not depict our true future, although we hope it will not be too different. For Star Trek is a vision... a dream... of a future that can be ours, someday. And what greater future could mankind have than seeking -- and achieving -- glory and universal brotherhood among the stars? 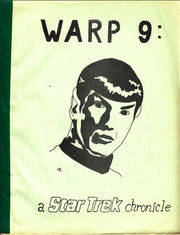 A badly mimeographed zine of ST stories and poetry. The only thing of interest to me in the issue was the poem, 'Requeim' by Dee. I thought it was the best piece of writing in the zine. The poem was rather morbid. I can understand fully the wish to write a raunchy Spock story. Don't we all, or most of us, want to be the object of his next pon farr? But to wish him dead... ? Uh, that's about the last thing I would wish. How about wishing he had been a Martian? After all, we'll be going to Mars soon. [3]