S.T.A.R. (Star Trek Association for Revival) was a highly influential organization of Star Trek: TOS fans. It was founded in May 1972 by George Christman, Margaret Basta and Laura Basta. It had the support and attention of many of the show's TPTB, including David Gerrold and Bjo Trimble.

S.T.A.R.'s main specific purpose was to revive Star Trek: The Original Series. A more general purpose was the promotion of science fiction.

Early on, the organization formed a steering committee that consisted of Margaret Basta, Laura Basta, and nine others (this committee at the time did not include George Christman who had moved on).[1] While the Basta sisters remained at the helm until the cessation of the club, there were many other fans who circulated in and out as officials. This committee was called S.T.A.R. Central. 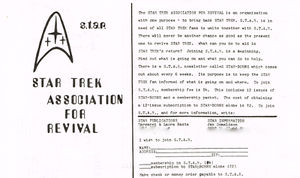 an ad in the third 1973 Equicon progress report

Subscription to the organization's newsletter, Star-Borne, constituted membership in S.T.A.R. [2]

The club's membership was enormous, and in the end, became too large and onerous for its creators to manage. It also suffered from over-reach and explosive growth and the alleged greed of a fan who had been an official leader and had misrepresented himself for profit:

In 1974, Laura Basta wrote about these troubles:

Originally, S.T.A.R. was supposed to be a nice little group of ST fans, and S.T.A.R. Central was a nice little committee of friends that published the newsletter. The only expenses even imagined in the beginning were those of printing the S-B, We just didn't think of phone calls, lawyers fees, artist supplies, etc. That was our first big mistake. But then, we were only fans and had never run a business before, and S.T.A.R. is most certainly a business. We really didn't comprehend just how much time or money was involved in running an organization as large as S.T.A.R.

Our membership didn't just grow, it multiplied almost geometrically. The demand was much greater than any of us could possibly meet... [3]

It folded under a dark cloud, and there were many inquiries regarding debt and money owed to fans. A fan in January 1976 asked: "How much of a black eye did S.T.A.R. give fandom?" [4]

In May 1977, a fan wrote that he thought the WSA was "investigating the Star Trek Association for Revival and the Basta sisters. No one is making any accusations or pressing charges. This is just an investigation urged at the request of some fans. If you have any gripes, praises, or useful information, contact WSA Chief of Operations, Ron J. Frantz." [5]

The zine, Nova was planned as an appeasement to unhappy fans, as well as a way to alleviate some of the club's debt. This zine did not get published.

Some S.T.A.R. clubs later morphed into more general media and science fiction clubs. Two of these chapters still operating: the Boston Star Trek Association (until the 1990s) and S.T.A.R. San Diego (active as of 2012).

While the club stated that it was officially neutral in many matters, it had some forceful statements regarding expectations of fans, their behavior, and the club's official alliances.

STAR is presently affiliated with many different fan clubs, fanzines, and ST groups. STAR does not intend to become involved with these groups in the sense that STAR is to take over. STAR'S main purpose is ST‘s revival and the passing along of accurate information concerning ST and science fiction. It has been STAR'S policy to remain uninvolved with any of fandom's disagreements (This means we're not going to take sides in fan arguments.) This also means, that with rare exception, STAR will not come out and officially recommend a fan club, a fan zine, etc. When STAR, and the editors of S-B do make a recommendation (eg. voting for a HUGO nominee such as David Gerrold's novel "When Harlie Was One") it is because we're trying to be objective in informing you what we think is worthwhile, and will be of interest to you. STAR won't 'play favorites'. What havoc that would wreak!

And when it comes down to that which STAR CENTRAL, has decided should be the official opinions of STAR as a whole you have:

1 - STAR is in favor of the animation.

2 - The animation must have a better time slot so write NBC!

3 - STAR wants ST back 'live' too whether it be a movie or tv show.

4 - STAR wants ST back whether it be with the original cast or not. This means that if Leonard Nimoy can't return to a 'live' ST, [it's] all right. Hollywood has many talented actors and actresses who can create new roles for ST. ST was never limited by its choice of cast.

5 - STAR wants people to write to NBC and PARAMOUNT, and especially to, PARAMOUNT for a new ST movie.

6 - STAR is against petitions since they do no good.

7 - STAR is against any boycotting of PARAMOUNT products. This is silly, and can only cause difficulties with negotiations.

8 - STAR is against any fan action that is irresponsible and immature. This includes 'hate' letters to PARAMOUNT, any kind of threatening letters, and even sending wet teabags to NBC. This creates a damaging image of the ST fan.

10 - STAR encourages STAR members to start reading science fiction if you never have done so before. There's a whole new world out there! Discover it for yourself!

11 - STAR encourages members to attend a ST or sf convention. Cons can be fun! And you're not too old or too young. The ages of ST fans ranges from infants to senior citizens, and consists of people from all ethnic backgrounds, religion, political viewpoints, and education.

12 - And because of STAR'S varied backgrounds, you won't have political involvement in STAR either. (Unless you vote Vulcan.)

STAR CENTRAL hopes that all ST fans do what they think is right, but will privately, and if forced to, publicly censure any STAR member who flagrantly ignores statements 1 and 8.

S.T.A.R. began publishing a newsletter in 1972 called Star-Borne. While the first issue had a relatively modest circulation of 2000 copies, membership grew. 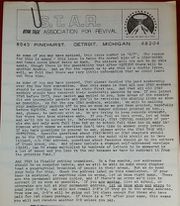 cover of issue #6/7 in which the editors explain that this issue is twice as big as Star-Borne and costs twice as much. They also note that membership to the club has doubled since "the New York convention."

The rise and fall of STAR can be traced through its newsletter. Star-Borne 1 came out in May 1972. The newsletter declared that "Star-Borne will be published monthly." In its pages, the newsletter published formal guidelines for writing letters to Paramount to urge that Star Trek be put back on the air. The letter campaign was STAR's reason for being, and STAR spread the word successfully. .....The next issue of Star-Borne was the June/July 1972 issue. The editors announced a change in publication schedule, saying "Star-Borne will now come out on the average of every six weeks....The last known issue of Star-Borne (Vol. 2, No. 13), came out in June. This issue carried an announcement of the first British Star Trek Convention. More to the point, the editors inserted the following statement: "We're trying to keep S-B on a bi-monthly schedule, but at times, it's impossible. And for those who were aware of what is going on, you know why we're lucky to have even this one out. After this, the Star Trek Association for Revival slowly faded into fan history. [6] 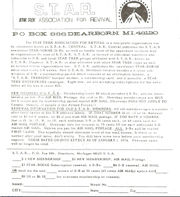 The newsletter ceased publishing in 1974. Still hopeful about continuing the club, STAR issued a membership guidebook in 1975 which gave details about the club's origins and spoke frankly of its purpose, activities, and problems which resulted from the association's phenomenal growth. [7]

The Rise and Fall

See Certain events have occurred withing S.T.A.R. Central for the last 6 months that deserve to be aired. (1974).

See S.T.A.R. Central and "This Individual".

Joan Marie Verba's historical timeline, Boldly Writing, goes into some detail about the rise and fall of what the author calls an early influential organization:

As STAR grew, its workload increased. In order to streamline STAR's functions, the club legally incorporated itself in the state of Michigan, and formed a steering committee called STAR Central. (George Christman was not listed as a member at this time; STAR Central consisted of Laura and Margaret Basta, plus nine others.) However, even this measure—unprecedented in Star Trek fandom— was unable to stop the collapse. STAR Central had faded away by the end of 1975.

There is a lot of concern directed toward S.T.A.R nowadays and perhaps some hostility since Star-Borne has not been printed in almost 10 months. This is of little concern for an article since it would only be complaints and bitching. But is S.T.A.R. finished now in it's operation? It's purpose was to get the show back, that's done. What of it's chapters...does someone have the inspiration to suggest a possible plan for another organization (maybe the STW) to absorb the members and chapters. Certainly we can't let that already-organized group just dissolve! [9]

In September 1977, Sharon Ferraro Short discussed the history, and fall, of the club:

Detroit, Michigan in the month following the first NY ST Con. It grew with astonishing speed and ended up 2 years later having had up to 5,000 members/subscribers (to Starborne the newsletter) and inadvertently sponsoring a fiasco convention at Cobo Hall [10]. The group was founded by, basically, a group of college friends — their education had been continuing all along and one by one, they went into careers and further education; where there had originally been nearly a dozen members of the STAR Central Committee, there were only 2 by 1975 — the clubs' numbers had grown in reciprocal to the committee's numbers. There was more work to be done and fewer people to do it. The newsletter missed a couple of issues — special offers of memorabilia advertised by STAR/Central in the newsletter were not filled — mail was allowed to pile up unanswered. Paula Smith and I were in Kalamazoo and involved to a minor degree in the publicity for OurCon (Michigan State University, May 1975). We knew that OurCon had purchased a good chunk of advertising in Star Borne. We also knew without help, Star-Borne would not be out before the convention — mail and organizational help were needed at STAR HQ in Detroit. One drizzly weekend in late March, we set out for Detroit via bus. We ended up in the basement, sorting mail up to eight months old, processing orders and filling SASEs with out of date Star Bornes. At the end of the weekend we were exhausted and felt as though we had gotten STAR on its feet a little better. Needless to say, the Star Borne did not get out before the convention and there has not been an issue since then. [11]

There were, at one point, 160 local chapters. Below is just a handful. 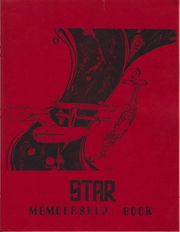 cover of the membership book, artist Don Royal. This is the fourth printing, 20 pages, cartoons reprinted from Star-Borne by Cory Correll (Correll was the founder of S.T.A.R. Montgomery County)