The zine ran for fifty-one issues. 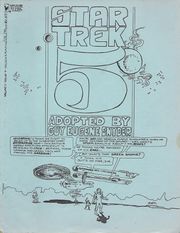 Seldon's Plan v.6 n.3 was published in June 1974 and contains 56 pages. It was edited by Cy Chauvin. It contains an article by Jacqueline Lichtenberg.

Seldon's Plan v.6 n.4 (whole no. 36) was published in September 1974 and contains 46 pages. It was edited by Cy Chauvin. Todd Blake was the art editor. John Benson was the circulation manager. 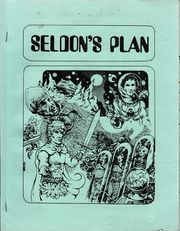 This issue is a Discon special.

The front cover is by Terry Austin, interior art by Todd Blake, John Benson, Randy Bathhurst, Roberta Brown, Wayne McDonald, Cy Chauvin, Frank Murray. The back cover is supposedly by Mike Gilbert, only the back cover is blank.

It contains many, many letters of comment. Some of the writers: David Gerrold, James Tiptree, Jr., Ursula LeGuin, Paul Walker, Sheryl Smith, Don Ayres, Darrell Schweitzer, Jeff Smith, Wayne McDonald. Some of the WAHF were Joanna Russ, Guy Snyder, J. Hunter Holly, and many others.

The letter from David Gerrold is the longest: it addresses many fans' previous letters regarding his alleged male chauvinism, his alleged ineptitude, his alleged ego, and his alleged use of too much sex in his books.

This is our special Discon issue, for the 22nd World Science Fiction Convention which is being held in Washington D.C. this year. Since two of the contributors to this issue have been nominated for a Hugo award as best far writer, I'd like to make a few comments in that regard.

These two contributors (Laura Basta and Jacqueline Lichtenberg) have both been called strictly Star Trek writers by some fans, then in the same breath are said to be totally worthless (even though the speaker has never read anything by either). This has hurt both these writers.

In a letter that Jacqueline Lichtenberg sent me, she said that she resented being called a "strictly Star Trek" writer by LOCUS. "I have been active in sf fandom for over 15 years, long long before ST ever came along. I sold my first sf story before I wrote my first Star Trek fanzine story. My interest in ST is ST as sf, and this is reflected in my KRAITH series which takes sf themes ST did not develop in full and elaborates on those themes with what many people feel is commendable originality. Laura's sf affilation is similarly strong. I, personally, am proud to be labeled a "Star Trek writer"--but I balk energetically at the suggestion of "strictly a Star Trek writer" and find the entire underlying concept (that ST is somehow not quite sf) personally offensive."

Jacqueline's first professionally published story was in IF in 1968-1969, ana she has recently sold a novel to Doubleday called HOUSE OF ZEOR. Laura Basta edited SELDON'S PLAN by herself or with the help of another editor for nearly four years; and having known her personally for over a year, I can assure you that she is not the raving fanatic (who can think of and talk about STAR TREK only) that some sf fans envision whenever someone mentions ST. I have no great interest in the show myself, but I hate to see fans of it put down as being not quite human. The articles by these two women will give you a taste of their style, for the many fans among you who have not encountered either of the writers before. Hopefully, too, they will encourage some interaction between the two (now largely seperated) fandoms. I think we all could benefit from that.