Critical Mass is a 1974 essay/article written by Jacqueline Lichtenberg for the zine Seldon's Plan. 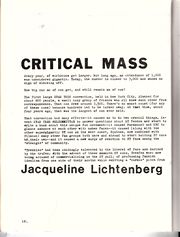 first page of the essay as printed in Seldon's Plan

It was published in v.6 n.4. Lichtenberg (and fellow fan, Laura Basta) were up for a Hugo Award that year, and the editorial of that issue of "Seldon's Plan" mentioned this in the editorial, along with a statement from and about Lichtenberg's role in science fiction fandom, and Star Trek fandom, and how she was chaffing at the bit about being regulated as "just" a Trek fan.

The essay is a five pages long, and its topic is Star Trek fans, science fiction fans, and conventions.

Lichtenberg knew she had the ear of many traditional science fiction BNFs (such as David Gerrold, James Tiptree, Jr., Ursula LeGuin as they, and others, were contributors of material for Seldon's Plan letter columns.

Every year, sf worldcons get larger. Not long ago, an attendance of 1,000 was considered gigantic. Today, the number is closer to 3,000 and shows no sign of slacking off.

How big can an sf con get, and still remain an sf con?

The first large STAR TREK convention, held in New York City, planned for about 800 people, a small cozy group of friends who all knew each other from correspondence. That con drew around 3,500. There's no exact count (for any of these cons) because hundreds had to be turned away. At that time, about four years ago [1], that was the largest sf con ever held.

That convention had many effects—it caused me to do two crucial things, invent STAR TREK WELCOMMITTEE to answer questions about ST fandom and start to write a book about this unique fan movement--it caused Paramount and NBC to glance askance at each other with ashen faces—it caused (along with the other super gigantic ST con on the west coast, Equicon, now combined with Filmcon) many other fan groups both here and abroad to start holding ST cons of their own—and it caused a new surge of reaction to ST fans among the "straight" sf community.

"Trekkies" had been chidingly tolerated by the liberal sf fans and derided by the trufen. With the advent of these mammoth ST cons, Trekfen were now being accused of commercializing on the ST pull; of professing fannish idealism from one side of their mouths while emitting a "carnie" pitch from the other. The ST cons were (and arej criticized harshly for a) disorganization b) lousy programming c) constantly mis-estimating the attendance,  and d) bitter fights among the concom itself (the last being standard operating procedure in fandom slightly magnified in STrekdom by the sheer SIZE of the con production).

Question: is a ST con really an sf con at all?

The second New York con pulled 8 or 10 thousand people, while simultaneously the west coast (Equicon) gathered another 10 thousand or more. The third NY convention topped out somewhere above 15,000,overflowing several downtown hotels. Smaller cons, such as Vulcon in New Orleans, manage to gather about a thousand people and hire enough hotel space to avoid the frenetic jamming of the big cities. These are more reminiscent of the typical sf con of bygone days, but in living memory 1,000 was just too MANY for an sf con. Is a ST con an sf con at all? And if it is, what is the limiting size such a thing can be?

Well, an sf con, loosely, is a gathering of fans to discuss sf subjects and exchange fanzines and other handiwork, books and comics, artwork and so forth. STAR TREK is indisputably sf (though a narrow part of the whole, still a part of that whole). It has won enough Hugos while on the air that no fan can deny the show as part of our field. It was heralded as the first "real" sf on tv, and most of us believe it is still the only sf on tv. It is, however, strictly videodrama and lacks many of the most treasured dimensions sf can achieve only in narrative. The ST fans gather in their thousands to exchange fanzines with STAR TREK stories written in the science fiction mode, attempting to make up for the unavoidable failings of the aired show. And even those ST fans who have never heard of sf fandom, Hugos or world-cons have all the personality trademarks of the trufen of sf—right down to a love for cats.

And this crowd of sf types is just as hard to handle as any trufan' s con. The concoms have the same troubles, only bigger. And they have additional troubles because of the copyrights (about which true ST fen are scrupulous as they can be).

But with STAR TREK you actually have a dual phenomenon. The key to understanding what a ST con is and why so much heavy criticism is leveled at it, and why the concoms seem always to be multiplying by fission is to understand this duality. SF fans go to cons for a single unified purpose. Half the ST fen go for this same purpose. The other half go for a different purpose. As a result, any ST con is under an enormous internal pressure which results in a sharp schism when the organism reaches critical mass.

The sf-riented ST con goer wants one kind of programming, one kind of dealer's room, one kind of guest of honor. The other half of ST fandom is the "off-the-street" ST fan, the viewer-fan who never reads sf, the devoted fans of the actors and writers, the starry-eyed screaming teenagers, in short, the very "trekkies" sf people find so repellent (as we do too).

The trekkies want one kind of con, the Trekfen and STrekfen another. The trekkies want the stars to come and sign autographs and give speeches answering the same questions over and over. They want a dealer's room full of tourist junk (the crass commercialism that so irks sf people), they want tribbles and costumes—in short, tney want to be entertained.

The Trekfen have been to sf cons with ST segments, and to ST cons for the last five years or so. They've got all the autographs they want, they've heard all the speeches and they've memorized the answers to the endless journalistic and naive questions. They are annoyed at the tourist junk. They come to meet people they've corresponded with or whose stories they've read in fanzines. They come to hold meetings of clubs whose members are spread all over the world. They come to do business with one another, talk about ST stories they intend to write and find a zine to print it; they come to sell original artwork and show off costumes. They want to MEET the stars at room parties, not march past in a faceless mob and get a scribbled signature. They want to BE KNOWN TO the celebrities (both from the tv production and within fandom) not to glance at them.

You can't have that when 15,000 people converge on one celebrity. These are sf people with sf objectives in congoing. They can't even FIND their friends among 15,000, even with namebadges. With trekkie programming taking up all the auditoriums (and the concom doesn't rent small rooms because all the groups are huge), they have to use their hotel rooms for meetings but ST groups are often too large for hotel rooms. As a result, half the people go home dissatisfied.

The trekkies find that the autograph lines are too long and too regimented, the stars too inaccessible because of the mob. The dealer's room is filled with stuff that doesn't interest them because they can't spend $3 or $5 on amateur magazines that don't look very promising by people they've never heard of. And worst of all, they wander around with the strange feeling of being left out, of a convention going on around them but not including them —because of the obvious groups of people who all seem to know each other but largely ignore them. A few of the trekkies who have fannish personalities will cross over by simply introducing themselves and unabashedly asking their trekkie questions. They will find friends and nearly instant acceptance, especially if they have something to offer, such as a story, a drawing, a costume, a fanzine, etc. "Hi. I make handcrafted idics and phasers. What do you do?" Instant friendship blossoms.

No single concom of 10 to 15 members can administer a program designed to entertain the passive attendees and at the same time to satisfy the actifen.

There is one other thing though that seems obvious but has yet to be tested. Being both an sf and ST actifan, my vision may be distorted, but it seems to me that no trekkie is going to be satisfied with a con to which Trekfen don't go. The Trekfen provide the entertainment, the trekkies just soak it up, and swoon with unbearable ecstacy. A ST con for trekkies only would end up resembling a circus or a Broadway show.

SF concoms would do well to ponder their ultimate purpose in putting on a convention. Awareness of the dynamics of this dichotomy of purpose among con goers may generate startlingly original solutions. The invitation con for actifen only. The show-con for people who want to be entertained by sf/ST. And a third type of gathering designed to mix these groups and give the passive onlookers a chance to pass into the "in-group". This process may actually be going on today without having been formally identified and defined. But being an sf-type myself, I am convinced that if we know what we are doing, how and why, we can do it more efficaciously.