Why wait and become a loser? (from a WSA ad in Warped Space #38)

The WSA Program is a fannish organization created to combat fraudulent fandom practices. It operated as part of the National Central Bureau and assisted not only fanzine buyers and sellers, but also the wider fandoms of comic book and baseball card collectors along with other sci-fi memorabilia. It operated until at least 1984, if not later. By 1978, they had assigned an estimated assigned 1300 numbers. By the end of their operation in 1984, they had recovered an estimated $100,000 in disputed payments and merchandise.

According to Wikipedia: "WSA was started by Stanley Blair, a retired accountant and publisher of Stan's Weekly Express (also known as WE), an early adzine for collectors started in 1969. When one of the advertisers proved fraudulent Blair took it upon himself to gather evidence and cooperate with appropriate authorities in the capture and prosecution of the defrauder, with restitution made to the victims. Blair had personal expenses of just over $200 for pursuing the case. Ron Frantz notes "The grateful victims took up a collection without [Blair's] knowledge. The funds exceeded Blair's actual expenses. This money was placed in a special account for the investigation of future mail frauds." [1] At this time Blair created the WE Reporting Bureau and WE Seal of Approval, "dedicated to fair play in the hobby and suggested professional methods of doing business by mail".[2] After an illness and the emergence of The Buyer's Guide for Comics Fandom (TBG) as the main marketplace for comic book back issue advertising, Blair shut down his magazine in 1973 with issue no.100/102 and under the umbrella of the National Central Bureau (NCB) devoted full time to the WSA Program and associated activities."[3]

Media Fandom's Use of The WSA Program 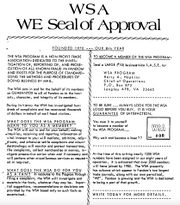 WSA Flyer in Warped Space #38, click to read. This zine series put a WSA stamp in its zines starting with issue #22.

Comments by Star Trek Fans in 1976

The Complaint Department is coming back -- groan -- but somebody has to do it... Due to various difficulties the National Central Bureau (NCB) is changing their format. Ron Frantz is our second Director; the first and founder of NCB, Stan Blair, retired... Since its inception, Stan put untold hours and quite a bit of his own $$ into the operation... NCB has many paying members (our monthly newsletter has a circulation of 10,000)... The NCB is an interconnected program... There is a Publishers Alliance for editors, the WSA Program (Seals of Approval numbers and Code of Ethics to dealers) and personal memberships for fans. To date, the only ST people I know involved in the Bureau's programs are Joan Burton whose Enterprise Enterprises has a WSA number (meaning she has singed the Code of Ethics outlining how she will operate her business) and G.B. Love whose zine Trek bears the Publishers Alliance seal. And myself [Mandi Schultz]. NCB is the only program of its kind in fandom. In gear, it works and it works well. Over the years, it's recovered literally thousands of dollars from fraud problems, in either returned money or merchandise. [4]

A recent Halkan Council issue contains a mention about fanzine editors making money; overpricing their zines by enough per copy to ensure having enough money to print the next issue. Frankly, I don't know of any zine editors who employ this practice. Mandi Schultz has been publicizing the National Central Bureau WSA Program. which is a non-profit coordinating agency dedicated to combating fraudulent activities in fandom. Fan publishers, dealers, and any other fen are free to apply for membership to the WSA. Anyone interested in finding out more about the WSA should write to Ron J. Frantz... [address redacted] enclose a SASE and be specific about what aspect(s) of the WSA you are interested in. [5]

In 1976, the Acting Administrator of WSA, Mandi Schultz, explained:

The WSA Program serves as the guarantor to all of fandom as to the character, honesty, and integrity of its members. It is a program dedicated to the investigation and reporting of all known mail fraud in fandom and exists for the purpose of standardizing procedures and methods of doing business by mail. This Program has existed in some form since 1970, and has, over the years, been instrumental in recovering, either in money or merchandise, thousands of dollars from fans' dealings with fraud perpetrators. As a member of the Program, you agree to observe the Code of Ethics, a series of policies for good, honest business practices, whether you are a dealer or a customer. You will be assigned a WSA Number which you are urged to display in all correspondence, advertisements, publishing ventures, etc.... When dealing with a WSA member, you can have complete confidence, because you are, in effect, dealing with the Program itself. Members are responsible to the Program for any actions contrary to the Code of Ethics--and these procedures were established for the protection of fandom: you. What will the Program do for you? It gathers, evaluates, and investigates information concerning complaints filed by members. It monitors transactions and issues Letters of Inquiry if need by. Should he have to, the Director will issue Caution and Warning statements as well as Stop Advertising notices. To become a member of the Program, dues are $5.00 ($2.00 annually thereafter), for which you receive an ID card, your WSA number and sheet of logos, and the monthly newsletter. As a member you may consult the Program at any time for help. The Program will back you, defend you, support you, and render any reasonable service you need or request... The Star Trek Division: Having been in and out of fandom since 1967, I've seen a lot of changes, the most disturbing of which has been the increased communicability of ST marketables. While we can't enforce quality or price controls-; we can do something to at least lower everyone's chances of becoming a victim of fraud or just plain poor business practices where the buyer will be the one to suffer." [6]

This issue [of Universal Understanding #3] there is a major announcement. I have become the Director of the WSA STAR TREK/SCIENCE FICTION DIVISION. The WSA is a program established in 1970 to fight fraud in the world of comic fandom. It has fought court cases, and in its very first case obtained a victory in a fraud amount to nearly $5000 against comic book collectors.

The Division will have the following sections: Star Trek Alliance, Publications Alliance, Clubs Alliance, and Science Fiction Alliance. People who join will sign a pledge similar to the WSA pledge, pay a small service fee, and then get to use the Division insignia in their ads and their mailing. Then, if problems arise, then can contact the Division representative to help check out any possible fraud or sloppy business practices that might arise. It is, in a way, a Better Business Bureau for those in Star Trek and science fiction. All in all it should prove to be a most valuable organization. Chairmen of the various alliances are being selected now, and we will provide you with their addresses in case you wish to check further into this worthy project. [7]

The WSA in Action