A 1976 ad in the 5th International Star Trek Convention said it was a "science fiction/Star Trek club with delusions of grandeur." From the fifth issue: "The Only Fanzine read by God is This One."

This zine series was preceded by Space-Time Continuum.

"September 1974 - Student orientation at Temple University Ambler Campus - I meet Peter A. David and Wedge Goldstein. They need a fourth signature on the Second Age Star Trek club charter in order to use the campus mimeo machine. I'm signature #4 - my high school friend Joe McK is signature #3. The club exists so that the mimeo machine can be used to publish the next several issues of Second Age." [1]

The numbering of the issues of this zine is massively confusing. The earlier ones seem to be called simply "volumes." Mid-issues were apparently called "issue, then volume." And later issues seem to be called "volumes, then number." Confusing things further is that the first volume is called #10, an homage to the zine it used to be: Space-Time Continuum, which ceased at issue #9.

End of the Road

From an undated 2-page newsletter, that also includes a 1-page story called "'The Final Voyage of Captain Kraffft" by the Captain and crew of the U.S.S. Padwig. Biased [sic] on characters created by Mark Spatz, who lifted a lot from other people."

Friends: There has been a long delay in the publication of this news letter, primarily because it is not a cheerful one, and we hate to get bad news.

The simple fact is that, as of this writing, Second Age has ceased publication for the foreseeable future.

Now don't get angry. With our subscriptions numbering less than half of what they used to be, with soaring postage rates and paper costs, and with the almost total lack of feedback we've been receiving, Second Age is simply no longer a viable proposition. The work is no longer as rewarding, and God knows we can't afford to sink any more money into it than we have.

To those of you whom we now owe money, don't panic. Please hold on. The only reliable source of revenue we can obtain right now will be from selling the mimeo, and we don't have any buyers yet. If anyone out there wants a complete fanzine kit and mimeograph, get in touch with Wendy or myself. Or write us at the Second Age box, which we intend to keep for a time.

If anyone is interested in what happened to the FSL and Finnegan, then I'll tell you that they saved the Federation several more times and then retired to the backwoods to live in a wigwam. As for the ever-snarling Captain Krafft, his last adventure is included in this news letter. We hate loose ends.

We worked hard at it, people. That we couldn't make a long term go of it is sad, but I guess the time was wrong, or the material not right. We had hoped to get more SF fans into reading the 'zine, but were rather brutally informed that most will have nothing to do with fan fiction, the [il]logic being that, if it's any good, it would be in a pro zine.

If anyone wants to speak with Wendy or myself, we'll still be floating around at cons. I'm the one with the Deerstalker cap, and Wendy is the one with the figure of Red Sonja and the table manners of Conan.

2nd Age 1 was published in July 1975 and contains 32 pages. This first issue is actually called "Issue #10," (an homage to the zine it used to be: Space-Time Continuum, which ceased at issue #9.) The front and back covers are by A.E. La Velle, and the interior illos are by Phil Foglio. 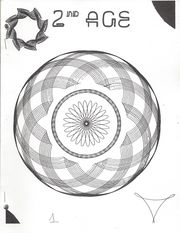 Front cover is an uninteresting set of Spirograph designs, no appreciable artwork inside either. Although their mimeo is readable, the journal is tremendously bulky since each page is printed only on one side and there are tremendously large margins. This entire thing could probably be fitted into 7-8 pages photo-reduced but your eyes might be a little worse for the wear. The journal is the product of the phoenix of the club, Space-Time Continuum. After S-T C folded, Second Age from the ashes to take over. The format between the two is not appreciably changed. The stories include two rewrites of very old SF plots. 'The Sauroid Encounter' depicts the story of a man that meets a dinosaur-type intelligence on another planet -- predictable. 'The Undesirable Alien' looks like one of Robert Sheckly's earlier tries at humorous fiction... it doesn't look up to the potential it might have had, could have been much funnier. There are a few other items inside, including a reprint from a magazine on U.F.O.s, a review of Shatner's new series. one of the best pieces of non-fiction in the journal is a piece by Joel Shrukin about worlds in space.... By far the best feature I saw was 'Power Play,' a piece of fiction by Steve Kitty and Peter David. It honestly surprised me. I didn't expect to find any ST fiction of its caliber in this journal. only problem is the long wait for the next installment. I wouldn't recommend cutting the story, maybe cutting some of the so-so pieces of fiction to include more of this better piece. All in all, this issue is very good for casual reading.[2] 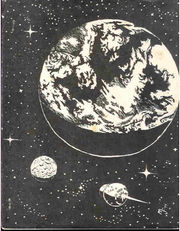 This issue was dedicated to James Blish.

2nd Age 3 (Issue 3 Volume 3) was published in January 1976 and contains 38 pages. The front cover is by Paul David, the interior illos by Cory Correll.

2nd Age 4 (Volume 3 Number 4) was published in April (Beltane) 1976. The front cover is by Stasy Tecker, the interior illos are by Karen Cochran and Joe McKendrick. 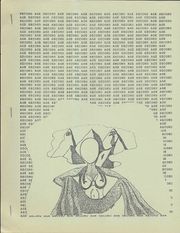 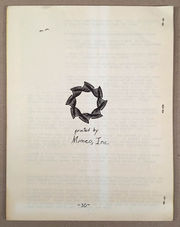 This zine is sometimes irreverent (tho'- nothin' on the order of MENAGERIE), often times funny (albeit rather tongue-in-cheek) but definitely on the light side. The quarterly journal of the club of the same name, SECOND AGE shows promise. What is promised, however, is somewhat nebulous. The Editor encourages off-the-bridge, non-character-relationship stories (in other words, straight SF done on a starship called ENTERPRISE) while one LOCer pleads for non-ST stories "as long as they aren't SF." (This person should perhaps try reading Zane Grey...)

The lead-off story by Jean Paul Satire and Emjay, a who-dunit starring Ellery Queen, is an uncomfortable mixture of good and bad writing, anachronistic references and slapstick. While I like the choice of villains at the end, I can't quite believe the bad guy's reason for his dastardly deed. I mean, would you believe Dav—oops, I almost gave it away—him smearing Captain Kirk with Parkay and sauteein; the poor man to death just because Kirk didn't like tribbles? Well, if you know who him is, you'd believe the reason...

The other story of any length is "The Earthman and the Android" by the Editor. A "Questor and Gary Seven and Jerry" tale wherein the parties meet for the first time. The artwork by Mary Bloemker, what there is of it in this story, is excellent. She should do more and on a larger scale. [3]