While the two zines were technically gen, issue two was quite slashy.

The original plan was for it to be published five times a year. In reality, there was an issue in 1973 and one in 1976. 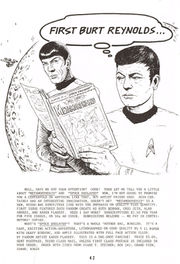 an ad from the 1973 Equicon program book

Metamorphosis 1 was published in 1973. It contains 68 pages. The front cover is by Greg Jein, the back cover by S. Steiner, interior illos by A. Andres, K. Flanery, M. Green, D. Herring. 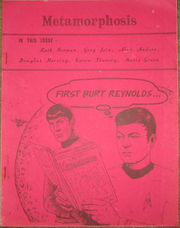 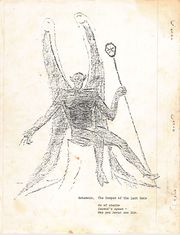 back cover of #1, photocopy of the back cover by Sam Steiner: "Bohemian"

FIRST BURT REYNOLDS [refers to a centerfold in Playboy]. Well, have we got your attention? Good! Then let me tell you a little about METAMORPHOSIS and SPOCK ENSLAVED!. Now, I'm not going to promise you a centerfold or anything like that, but artist friend Greg Jein certainly has an interesting imagination, doesn't he? METAMORPHOSIS is a new, mixed-bag Nimoy/Trek zine with the emphasis on quality plus quantaty. First issue features such fandom greats as Ruth Berman, Greg Jein, Alan Andres, and Karen Flannery. Need I say more? Subscriptions $2.50 per year for five issues, or 50¢ an issue. Submissions welcome -- We pay in contributors' copies. 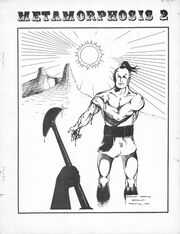 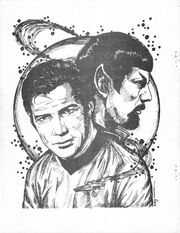 back cover of issue #2, Gee Moaven

detail by Mary A. Emerson, from the table of contents page

"This issue is dedicated to Carol Frisbie and Kathy Penland, without whose assistance meta could not have morphosized."

Hello! And Ha! Aren't you glad it's the Bicentennial year? Oh, no? Well, history buffs, you're now holding in your hands the Bicentennial issue of the late, __________ (add your own adjective) META—containing the longest (in duration) two-part story in fandorm. A distinction I could do without, but one cannot deny the facts. Boring excuses later....

Not only is this META's Bicentennial issue, I was thinking of calling it the Death and Insanity issue—likelihoods which could be ascribed to the editor as well as the contents (especially after you see them)! But I'm sure each of you have your own cherished expressions for the fanzine that left you hanging on the cliff's edge with Spock precisely...ah...some time ago. True to form, and not to be outdone, the characters have done it again. (Don't blame me, I only work for them!) "Summer's End" is not the END, as it were, but the first story in a lengthy trilogy.

NOW WAIT! Before you get out the tar and phasers feathers, let me make one thing "perfectly clear." You won't have to wait years for the next story, because it will be published elsewhere. So there!

Now on to better things, like the rest of the issue. In keeping with the meaning of our title, META presents a fine diversity of material in this issue. From the Kraith universe, we have Joan Winston's "The Maze," and from an alternative time-stream, so to speak, Connie Faddis, "Letting Go." The romantic past lives again in Don Trimmer's "Errantry," and Jackie Bielowicz provides us with a 23rd century who-dun-it, Enterprise style! In addition, we are blessed with a first-rate assortment of poetry and artwork from some of fandom's best writers and artists.

All in all 'tis a 'zine I am very satisfied with, no small thanks to the last minute help of a number of people. Special thanks are due to Doug Herring, Gee Moaven, Connie Faddis, Joni Wagner, [Gayle F] and Gerry Downes for coming through at the eleventh hour with needed artwork, etc., and to Carol Frisbie and Kathy Penland for invaluable input on "Summer's End." But the all-time eleventh hour price has to go to Kathy Penland for the long hours spent typing the #&*7&* camera-ready copy to meet an impossible deadline, that was met, needless to say. Kathy also did ail of the creative title lettering, my drawing talents being nil.

So if META looks good to you, it's because I had some good people helping to make it that way!

And now, time out while the editor sobs and bitches a little! You may notice that "Summer's End" is strangely lacking in illustrations. I had planned them and thought I had them, but agreed artist folded on me at the last minute due to personal problems, leaving me with no option but to publish it without illos (save one, thanks to Mary Emerson! [1]). I am going to have it illoed yet, then will print a limited-run art-folio for those of you who may be interested. SASE if you're interested in more particulars on the project.

One more thing re. "Summer's End": I'll provide a Zerox of Part I at cost to anyone who may want it. Part I ran twenty-two pages; I can Zerox copies for 5 cents per page currently; please add approx. 60 cents for postage; if it's less that that, I'll return it with the copies. I intended to prologue Part I here, but discovered that there were so many things I'd have to bring into it the prologue would have been as long as the story (well, almost). Since META I is permanently out of print, offering a Zerox of Part I is the best solution to the problem that comes to mind.

One last problem, I promise. After I had the layout set in, I realized with horror that I couldn't locate the identity of the mystery author who sent me "The Final Frontier" for publication. So if said person will come forward from the void, I will gladly fork over their contributor's copy, plus the credit due in The Sensuous Vulcan.

And speaking of that, S.V.'s lack of arrival has been due to a lack of material! So come on, send in those closet stories! The circumspect among you can employ pen-names.

As to META, I'm already being asked if there will be a number three. That depends on you, the readers, and on you, the artists and writers. If there's a demand, there will probably be another issue. All I'll say now is that I enjoyed doing this issue and hope that you enjoy it too after the long wait.

Finally, Meta #2 came out and we can read the conclusion to 'Summer's End!' The editor has worked up an excellent issue with superb layout and top quality illos by Landon, Moaven, Herring, Faddis and others. Good choice of material, too: the light comedy balances out the blood 'n guts. 'The Maze' is a Kraith Warder-Leige (Spock/Kirk) tale with some lovely Signe Landon illos. The story starts out well but takes an absurd turn of events, making 'The Maze' either a ridiculously serious story or a seriously ridiculous story. Take your pick. [2] 'Saboteur' is an amusing whodunnit about the Enterprise being sabotaged by an officer on board -- the culprit is either one of two grinning Vulcans! 'Errantry' is a delightful tale of Sir Kirk, knight errant, his trusty Squire and his noble steed, Phazer, complimented by a beautiful Gayle F illo... 'Letting Go' is a well-handled McCoy story complete with Connie's scratchboard illo. Gory and good, 'Letting Go' prepares the reader for 'Summer's End.' There is no synopsis for SE, part one, but it doesn't take you too long to find out that poor Spock is getting the royal green stuffing knocked out of him by a bad-ass Romulan sadist named Kortran... Coming out after, 'The Logical Conclusion, 'Summer's End' is not that impressive as a get 'em, and Spock's eventual recovery is tedious and drawn-out. And to add aggravation, it's not even the end of the story. Grrr... another lengthy wait for the next part? ... Meta #2, altogether, is a classy, well-written zine with some of the best writers and artists around. [3]

At last! META 2 is available at last, and with It, part II of the longest two-part story in fandom, SUMMER'S END. It was well worth the wait, believe me! Diane has a rare talent to write the ultimate "get" stories SO well, that you suffer every instant with the characters. And the stories that keep SUMMER'S END II company are or equal merit, not to mention the fine art work and poetry! Authors include such names as C.R. Faddis, Gerry Downes, Kathy Penland, Joan Winston and Diane herself. [4]

A well written zine. Has a story written by Joan Winston. Has a beautiful story "Summer's End" written by the editor. I really enjoyed this zine and highly recommend it. It has good writing, good art, and good poetry. It's well worth the price. [5]