Joan wearing a Theiss’s costume from "In Truth is There No Beauty?" Photographed by the late Jeff Maynard at DisCon 2 in 1974.

Joan Winston was a Star Trek big-name fan, dating back to the earliest days of Star Trek fandom.

She was one of the organizers (aka "The Committee") of the original Star Trek conventions during the 1970s, the story of which is chronicled in her 1977 book The Making of the Trek Conventions. Winston was also a co-writer of the classic 1975 text Star Trek Lives! where she wrote about her visit to the Star Trek set during the filming of the episode "Turnabout Intruder."

Winston also wrote fan fiction and edited a fanzine, Number One, all about William Riker from Star Trek: The Next Generation.

Winston continued attending and speaking at conventions into the 2000s, with her last appearance at Shore Leave in 2006. Winston was featured in the 2005 documentary Trekkies 2. In 2007, she was named the 4th most influential Star Trek fan of all time.

She wrote fanfiction, sent story ideas to Trek creator Gene Roddenberry and visited the set of the show, was a part of the efforts to keep Star Trek from being cancelled in 1967 and was an organizer of the first large-scale Star Trek convention in January 1972.

Through her jobs in the contracts departments of both CBS and ABC, she established a number of connections which later allowed her access to Star Trek producers, actors and staff, which she used to create publicity for the show and its fandom. 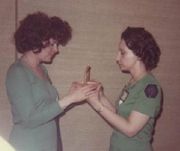 Joan was a passionate fan of science fiction in general, not just Star Trek. She picketed NBC during one of the original campaigns to keep the series on the air, wrote Star Trek fanfic, and later in her life, she edited Number One, a William T. Riker-centric zine.

Her work for the series and fandom was chronicled in Star Trek Lives! (1975), which she wrote with Jacqueline Lichtenberg and Sondra Marshak, and The Making of the Trek Conventions: Or, How to Throw a Party for 12,000 of Your Most Intimate Friends (1977). 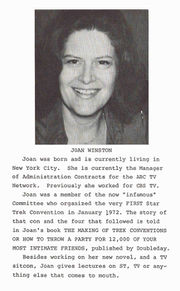 from the Neo-Star: Cleveland Star Trek Convention program book in 1979, where she was a guest of honor

After Star Trek's cancellation in 1969, Winston and other fans attended Lunacon, but "there was a sense that 'Star Trek' fans were not real sci-fi fans," according to Devra Langsam, editor of Spockanalia and fellow organizer of the first Star Trek convention.

Elyse Pines, a friend of Langsam’s, proposed a gathering specifically for Star Trek fans. A mutual friend of theirs brought in Joan Winston, who used her show business contacts (mundanely, she held jobs on the business side of ABC and CBS) to secure copies of 15 Star Trek episodes, a blooper reel, and the presence of series creator Gene Roddenberry.

Joan and her associates, known to fellow aficionados simply as The Committee, presented four more conventions, then retired from throwing cons in 1976. By that time there were more than 40 annual Star Trek conventions.

Joan was also a frequent guest of honor at other fan cons.

When Joan Winston died in 2008, she received an obit from the New York Times: Joan Winston, ‘Trek’ Superfan, Dies at 77, Archived version

Later that year, Rob Walker, writing for the New York Times Magazine did a follow-up article called Enterprising, in which he argued that "the active approach to media consumption that Winston and her fellow superfans pioneered is more vital and widespread than ever." Newsweek created a slideshow of pictures from early Trek cons that include many pictures of Joan in her element.

Winston was also mentioned in Women who love ‘Star Trek’ are the reason that modern fandom exists, a 2016 article by Victoria McNally that was written, in part, to commemorate Star Trek's 50th Anniversary.