The Making of the Trek Conventions: Or, How to Throw a Party for 12,000 of Your Most Intimate Friends

You may be looking for The Making of Star Trek.

The Making of the Trek Conventions was written by Joan Winston and published by Doubleday in 1977.

It is an expansion of a chapter by Winston in Star Trek Lives!. The book may be a version of So you want to have a "Star Trek" convention.

The book offers a look at the work involved in the creation of the Star Trek conventions, as well as 32 pages of photos, underground cartoons, and trivia contests. 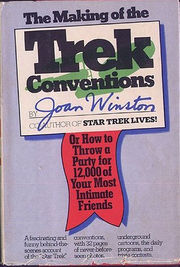 front cover of the hardcover edition 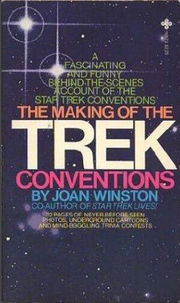 front cover of the paperback edition

This book shares roots with Winston's 1977 essay in Starlog. See So you want to have a "Star Trek" convention.

Believe it or not, this is exactly how it was. I was there. It really happened -- and it really was this zany.

Never had the fans of a Television show flocked in such droves with so much excitement to demand the return of their favorite fare.

Fans of television shows were always dismissed as ineffectual by Hollywood. After this book came out, which is based on an expansion of Joan Winston's contribution to the Bantam paperback STAR TREK LIVES!, Hollywood learned that a TV show's fans really do matter.

While reading this book, remember all this happened before email, before the Web, before the internet was anything more than a klonky connection among university campuses.

This is one of a handful of non-fiction books about Star Trek that tells the story of what really happened that has in fact changed the entertainment industry if not the whole world.

Read it. Believe it. It really happened -- and could happen again. [1]

Reading about how a friendly gathering turned into a large gathering and then spun out of control into a massive deluge of people...walking around with toilet paper badges stuck w/ little gold stars is very funny. Joan Winston has a great way of turning phrases and putting you into the scene...even though it happened so many years ago. [2]

I first read this book over twenty years ago when I was 11 or 12. I got it out of the library over and over. It was hilarious and sentimental and I loved it. I wasn't born when the events described in the book took place. I loved Star Trek but from the late night reruns and The Next Generation. I didn't have a crush on William Shatner -- he was OLD -- and I'd never been in a Star Trek or Sci-fi club. I didn't remember the seventies, I was a baby. I had little in common with the author or the people she told stories about. But I related to the madcap geekery found in the pages. I got it. And today I'm back in that same library tapping this review into my iPad -- don't you love the future? -- and I still get it. I need to find this book and read it again. [3]

As with the Star Trek: The New Voyages series, some fans felt that the book was meant for insiders, or that being a BNF was a matter of being in the right place at the right time:

Stage 6 [of the writer's Star Trek fan experience] almost came to a screeching halt when I found Joan Winston's The Making of the Trek Conventions — a book that gives the reader an intimate behind-the-scenes look at Star Trek cons. The best thing I can say about Miss Winston's book is that it has lots of photographs and six great, hundred-question trivia quizzes. It’s worth getting for those alone. But just when I was starting to feel secure in my abiding regard for Star Trek and Star Trek fandom, that book put me back about five stages! Miss Winston and her cronies were on the “inside Trek” and she obviously wanted us to know it. I began to feel like a little girl on the outside of a candy store with her nose pressed against the window. [4]

We were extremely interested in your review of Marshak and Culbreath's New Voyages 2 in "Trekviews." It was a sensitive and highly intelligent review. Your opinions, by the way coincided exactly with ours. We even wrote the ladies to that effect. The "closed-shop" attitude, as you say, was disappointing, to say the least; but we were really more frustrated at the caliber and lack of imagination shown in the stories in NV 2 (except for "Snakepit" and "Petard"). The stories in New Voyages 1 were so much more interesting to us. What can compare to Spock’s reaction to the irresistible "sprite" in "The Enchanted Pool" or the depth of feeling expressed in "The Mind Sifter"?

In case someone hasn't read Joan Winston's book The Making of the Trek Conventions, it's a behind-the-scenes look at the organization and planning that went on during the New York (and some other) cons. While Miss Winston tries to tell us, as do Marshak and Culbreath, that the cons started out by a bunch of fans saying, "Hey, let’s have a con!" to me the book said that if you don’t call William Shatner "Bill" or DeForrest Kelley "De" or Gene Roddenberry, Jr., "Little Rod," you've missed the boat. Well, I'm sorry, but the closest I've come to any of them is tenth-row seats to see Shatner with the Chicago Philharmonic in June.[5] He went onstage for about ten minutes to do a reading from Arthur C. Clarke, but that doesn't make me any less a loyal fan than Miss Winston. She just happens to be in a position to know people. [6]