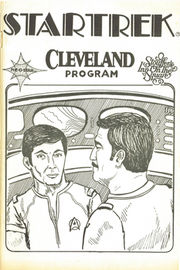 front cover of the program book, artist is not credited 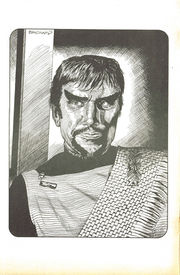 back cover of the program book, Mike Brown 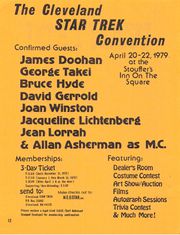 a flyer printed in Academy Chronicles #6

A fleeing figure bearing a strong resemblence to Darth Vader dashed through the door of the Colonial Arcade and began running west along busy Euclid Averme. Since the time was noon of a pleasant Saturday, the runner attracted some attention from passing traffic, even in a town that has learned to accept burning rivers, lunatic mayprs and indicted councilmen. As the runner passed the row of five and dimes and fast food joints, his black and scarlet cape brushed off the displays of hot dog vendors. A few pedestrians screamed, a city bus screeched to a halt, and a gaping woman walked into the plate glass window of the May Company. The running alien was headed for NEOSTAR, the Cleveland Star Trek Convention in progress at Stoffers Hotel. He had taken the lunch time break to visit a s-f bookstore up the street from the con site, ran short of time, and returned to the hotel in costume. In addition to Lord Darth Vader, there were a few Klingons in sight (rumor had it the State Department was offering them Cleveland in exchange for a friendship treaty. The Klingons concluded it wouldn't be worth the Tribble.) And there was a well-dressed Gorn who won the costume prize. The event, although weakly publicized, drew 1500 from a 20-state area. The event was very well run, according to professional gofers and long term con attendees. Featured guests were James Doohan, George Takei, Bruce Hyde, David Gerrold, Jackie Lichtenberg, Joan Winston, Allen Asherman as MC, and special appearances by Harrison Allen of NASA and Tom Batuik, creator of Funky Winterbean. With three or more events running simultaneously, it was very difficult for an observer to catch very much. The indecision while standing before the activities board wasted precious minutes for this first time attendee. But I did manage to hear all the stars, talk to a couple of them, and find almost as much love for the series and the film among the professionals as among the fans. Jim Doohan was working this con while ill. He talked with pleasure about the movie reunion of most of the original cast, mentioned a syndicated series on the future has in the works, and mentioned recent appearances he has made on "Make Me Laugh: Canadian occult-esp show, "Beyond Reason". (Pause to watch "Shore Leave".) Jim said Paramount has him and the rest of the cast under contract until May, pending decision on more TREK productions. He talked about his acting career, stating that he prefers the stage to other media, because there is a better chance to work on the character he is portraying, seeing his impact on the audience and getting its feedback. He reminisced about a stage career that goes back to 1947, stated he would go back to a TREK series only if it remained under the creative control of Gene Roddenberry, and surprised most of the audience by saying his favorite TREK episode was "Doomsday Machine". Bruce Hyde (Lt. Kevin Riley) brought a special kind of intimacy to his presentation. Bruce seems to have been out of acting for a while. He was a star of the San Francisco company of "Hair" after his TREK appearances, but his career has also included stints of house painting and teaching. Bruce has not been as much of a part of the con circuit as other characters from the series. He seemed genuinely surprised at the adulation he was receiving from the small circle of fans. Bruce will not be appearing in the movie, although he had hoped he would. He is actively involved in promoting the Hunger Project, a program that hopes to eliminate world hunger in the next 18 years. He told his audiences about the project, and asked for help with it, a worthy goal in which Trekkers can help to improve the future. Bruce entertained his audience with a selection of country songs, mostly Hank Williams, but including a few of his own composition too. (Tip: his "Sweet Times" is beautiful, even if you're not into C & W) He did not sing "I'll Take You Home Again, Kathleen." In all, Bruce demonstrated he was a good person, and the small group that sought out his sessions had a real treat getting to know him.) George told us that the bridge set has been kept intact by Paramount for future productions. He said Paramount is contemplating a sequel to the movie, or may offer TREK as an occasional two-hour special, offered about three times a season via network TV.

George's next acting venture will be as Lord Yabu, a major character in the film of James Clavell's Shogun. Shooting will start at Paramount in June. Other events featured included the infamous blooper reel, a slide show hosted by Allen Asherman, talks by the guest writers, a huckster room (best item was a $600 phaser), and an assortment of episodes and classic s-f films like "Forbidden Planet", and music by Omicron Ceti 3. Loved every minute of it. [1]

Joan Winston announced a new book she was working on about the best of Star Trek fanzines (and is "one of the many people keeping a close eye on the precarious legal status of amateur Trek endeavors"), Jacqueline Lichtenberg (the fan who "epitomizes fandom") gave a talk, the slide show for "City on the Edge of Whatever" ("It's funny, but makes more sense if one attended the con it satirizes. It's best appreciated by those who either love or hate Harlan Ellison, in other words, everyone, and those who have seen [the slide show] more than six times."), the banquet food was terrible, the music by Omicron Ceti Three was fabulous, the STW panel was poorly attended, and the slide show by NASA was interesting. [2]