Number One is a gen Star Trek: TNG digest-sized anthology fanzine published by Orion Press. It was first published in 1993 and ran for six issues until 1999.

From the publisher: it is a "fanzine devoted to William T. Riker. It can be zany, arcane, witty, romantic, dramatic, and plainly oddball. But readers can rest assured that it will never waver in its focus on the executive officer of the starship Enterprise and his fellows..." 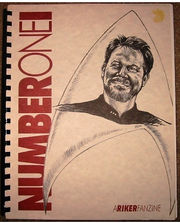 Number One 1 was published in 1993, has 189 pages and contains nine stories by BEKi. Interior art is by BEKi. 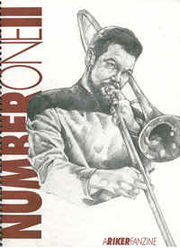 Number One II is (surprise, surprise!) a Riker fanzine written and illustrated by BEKi, a major-league Frakes fanatic and one-woman wonder.

The ten stories she has produced here certainly live up to the Orion Press ad, providing humour, action and psychological drama. My favourites were:

The Road not Taken, which is a sequel to "Parallels' but is set in the universe where Riker defeated the Borg by annihilating Loaitus. This story explores Will's feelings after seeing Picard alive and well in another timestream.

The Mark of Cain is an alternate reality story where. At the end of 'Second Chances' Tom sees an opportunity to get back at Will. I found this one interesting not only because Will's life hangs in the balance but because we see him struggling to make sense or his "brother's" actions and finally coming to realise that he might have acted ihe same way. But will he forgive, that is the question?

The Captain's Son is an extremely well written action story set in the future where Riker is captain of the Enterprise, married to Troi and struggling to get to know his bastard son, Reevus. the half-human misfit he reluctantlv rescued from Malkore III.

The Last Goodbye is a bit of a weepie and certainly brought a lump to my throat. Tom Riker is in a Cardassian prison but he is allowed to speak with Troi as a last request. "I love you, I always have and I alwavs will. Tell Jean-Luc goodbye for me and tell Wes ..." Hang on a minute! Jean-Luc? Wes?! Who is this guy? We've seen a lot of Shakespeare on Star Trek but here BEKi gives us a taste of Dickens.

I'm not a Riker groupie but I think any TNG fan would enjoy this zine. BEKi certainly has a handle on Riker's character and I loved her exploration of his relationships with the crew and with Troi and Picard In particular. I give this one 8 out of 10). [1] 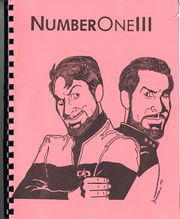 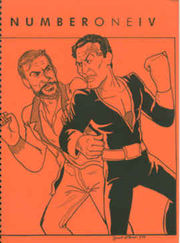 Number One 4 was published in January 1997 and contains 194 pages. Stories by Andra Mueller, Joan Winston, Gail Christison, and Beki; cover and most of the interior illos by Janet D'Airo; additional art by Beki and Perron. 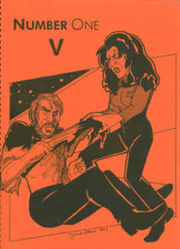 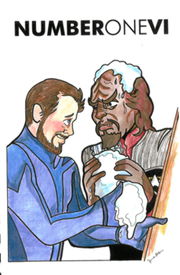