The Starfleet Handbook is a resource to the show. It was published by Geoffrey Mandel, who was later hired to work as graphic artist for several of the movies and later series, including the 2009 Reboot[1]. There were thirteen issues in the original fanzine published between 1974 and 1978. The series was discontinued because in the wake of Star Trek: The Motion Picture many official technical manuals and such came on the market, and remaining material was incorporated in Mandel's USS Enterprise Officer's Manual (1980).[2] In 2007 the Federation Reference Series Online revived the Star Fleet Handbook (with Mandel's permission) and published a fourteenth issue (maybe as pdf only?). In the zine further submissions were solicited, but it is unclear whether a fifteenth issue was ever published. 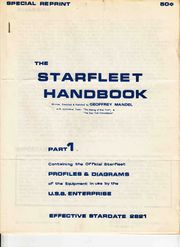 cover of issue #1, part one 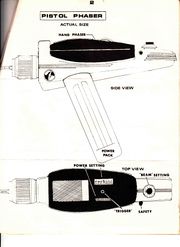 inside page from issue #1, part one

The Starfleet Handbook 1 was published in 1974. It appears to have been issued in two parts. The first part was mostly technical drawings and explanations. The second part was articles. 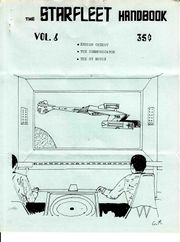 The Starfleet Handbook 6 was published in 1975 and contains 6 pages. The editor says he is going from offset rather than xerox with the next issue.

The Starfleet Handbook 7 was published in 1975 and contains 8 pages. 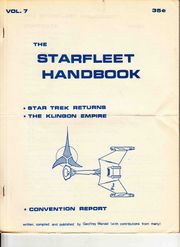 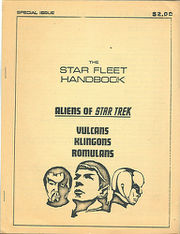 The Star Fleet Handbook 9 was published in 1976 and is a special issue titled "The Aliens of Star Trek - Vulcans, Klingons, Romulans". It has 16 pages. As sources it gives the Star Trek Concordance and the third season supplement to it, the Kraith Creator's Manual, Pastaklan Vesla #2 (for the Kraith Surak's Construct article) 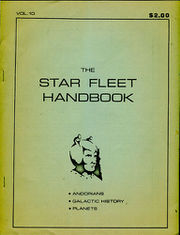 The STAR FLEET HANDBOOK is the newszine of UNISTAR (The United Wations Inter national Star Trek Association for Revival). It is accompanied by or alternates with a monthly single sheet called "The UNISTAR Newsletter". This issue of the STAR FLEET HANDBOOK has a small photo article about Andorians, which is one of a con tinuing series of profiles about aliens in Star Trek. There is also a sheet of Planetary Classification and a Planetary Catalog listing all the colonies and stars mentioned in Star Trek. Plus there is an especially intriguing chart containing a suggested history of the galaxy from the birth of the galaxy to 500 years in the future. And a convention report on the February 12 N.Y. con, lots of good Star Trek news, other cons, etc. I'm very impressed with the reproduction and layout in both the STAR FLEET HANDBOOK and the UNISTAR NEWS LETTER. The typing is very neat and readable, the off set printing is of fine quality. That, and a very skillful use of transfer lettering makes these publications very easy on the eye and close to professional-looking. [3] 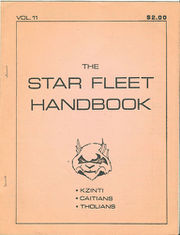 The Star Fleet Handbook 11 was published 1977. It has ten pages. It's cover price was $2.00. The title page lists "Kzinti, Caitians, Tholians". It may be an update/reprint of issue #2.

It is online as pdf here(PDF no longer available). 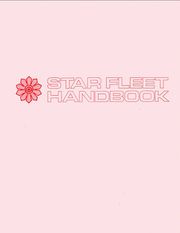 The Star Fleet Handbook 13 was published 1978. It has 16 pages. The cover price was $1.50. It credits the Starfleet Command Training Manual by John Wetsch as source for the General Orders.

The Starfleet Handbook 14 was published in 2007, when the Federation Reference Series Online revived the zine. It has 18 pages.