Fanzine is a Star Trek: TOS "fan-generated magazine on tape" by "Shuttlecraft." It is a "45-minute monaural cassette tape."

In 1978, Winston Howlett was selling it through M'Pingo Press and described it as "Kraith "Affirmation" music, dramatic-comedy readings." [1] 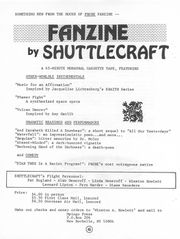 "Shuttlecraft" was Howlett's "studio group" and this fanwork was originally created for blind fans. [2]

"I also found Winston Howlett's "Fanzine" tape, which has the Kraith Ceremony music on it. I'm thinking of taking that one along --- even though we haven't done a Kraith Ceremony in heaven knows how long." [3]