Beyond Orion is a gen Star Trek: TOS anthology. 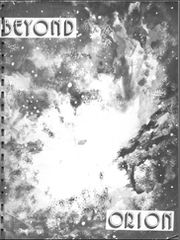 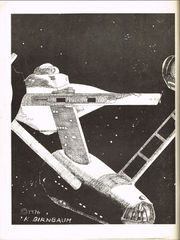 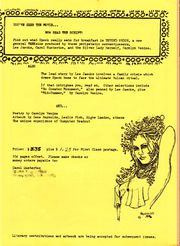 In attending conventions and talking to people about Star Trek and its fandom I have encountered those not only of middle age, but also some elderly folk who are as enthusiastic about the show as any thirteen-year old. What is STAR TREK's appeal to them? I have heard these people speak articulately about the hope for a future many of them will never see. Their interest in the show seems to reflect much the sarne hope that is evident in the interest of the younger ones. My belief is that part of the answer lies in gaps -- culture gaps, generation gaps, socio-economic gaps, and more. STAR TREK's fandom, and indeed, STAR TREK itself, bridge many of these gaps. At conventions, no matter what one's position socially, economically, or otherwise, all have All have at least one thing in common -- love for STAR TREK. On this basis, there is the first bridge.

See reactions and reviews for Mid-Summer.

[zine]: [It is] half-spaced and double-spaced between the paragraphs. I wish editors would not do this. I will sacrifice my eyesight to my pocketbook at any time whatsoever. The lead story, 'Beyond Orion,' has to do with Spock's and Sarek's attempts to deal with Amanda's impending and then actual death. I wasn't able to decide if this was a terribly bad story written terribly well, or an extraordinarily good story written terribly badly. There are two shorts, an epilogue to 'The Cage.' by Lee Jaecks and an intriguing interlude to D.T. Steiner's 'Summer End' by C.M. Venino. There is poetry by Carolyn Venino, assorted cartoons and a computer memorandum to thoroughly silly play by Jaecks and Venino called 'The Jelly Doughnut Memorandum (or Smucker's Time)'. For a two-person zine, this isn't bad at all. P.S. a gorgeous cover by Gene Reynolds.[1]

Here is a real sleeper, folks, and a nice surprise at that. Every single piece within its covers would look good to outstanding anywhere else. Together, they make for a very enjoyable zine. The two major stories, both by Lee Jaecks, are excellent, both dealing with the death of two peripheral but important ST characters. They are cogent, credible and adult in their dealing with human (or Vulcan) grief. The title piece (more of a novella) "Beyond Orion," is powerful and intelligent, emotional but never slopping over. "NoGreaterMonument"is shorter, but just as good as "Orion." Carolyn Venino has a shortie, "Mid-Summer," which like Connie Faddis' "Confrontation" in IDIC 3 was written to plug a gap in one of Diane Steiner's works, this time "Summer's End" in METAMORPHOSIS. Highly recommended.

One reviewer wrote: "Two of the stories are reprinted from other 'zines (TETRUBMRIANT 11 and PASTAK 3), and most of the stories were written by Lee Jaecks. The title story is the account of Amanda's lingering last illness and death, and is "in the KRAITH manner done."

"Mid-Summer," by C.M. Venino is a tie-in with D.T. Steiner's "Summer's End" (in METAMORPHOSIS 2). In all, this 'zine is a most attractive first effort, layout easy to read, interesting to the eye." Another reviewer said, "I couldn't agree more -- a very impressive first effort." [4]

Beyond Orion 2 was published in July 1977, and is 104 pages long. Editors were Carol Hunterton, Lee Jaecks, and Carolyn Venino. 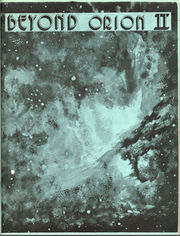 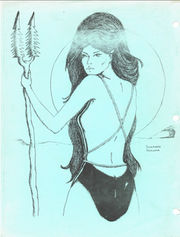 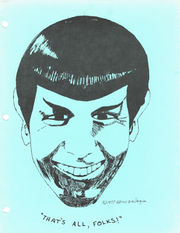 inside back cover of issue #2, Kevin Birnbaum, an example of Spock Smiles 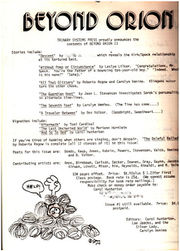 This issue is "dedicated to Beverly Volker nad Leslye Lilker for reaching out to us and making us one in the true spirit of IDIC. Which can say more than this rich praise -- that you alone are you?"

See reactions and reviews for All That Glitters.

[zine]: Perhaps one shouldn't make a judgement on the basis of just two issues, but the editors of 'Orion' seem somewhat taken with themes of death and torture. As the Kirk-Spock relationship is to Contact, so is the Hurt/Comfort syndrome to this zine. Of the 23 pieces [in issue #2], nine deal with someone getting tortured, kilt, or both. Against that, exactly four stories are more than three pages long. There is not, in this issue at least, very much development even of the zine's chosen themes. Nevertheless, some of the stories are quite good, particularly the two Roberta Rogow had a hand in. 'All that Glitters' is a most enjoyable The-Enterprise-vs-yet-more-Klingon-sabotage, written with a pleasantly wide cast that is rather typical of Rogow; probably the best of the book. 'A Doleful Ballad,' a filksong reprinted from Tetrumbriant, makes a somewhat loose six pages, but is fun. Stephen Gray and Gene Reynolds' illos are great. Leslye Lilker has a Sahaj segment, 'Without Pomp or Circumstance.' It leaves a few things unexplained in my mind, but then, so does the whole series. It is sufficient as a story, and if you like the series, you'll find this one necessary. 'Decent' takes off where Jennifer Guttridge's 'Tower of Terror' in Tricorder Readings #2 and #3 stopped six years ago. If you caught that, there's not too much point in reading 'Descent'; it is a recap, plus Kirk Realizing What Spock Sacrificed. [The author] is a good writer of emotion -- see 'For Cyrano' in thish -- but this one missed the cosmic boat. [Issue #2] is an average zine, disappointing after the first issue. Expensive for what you get. Content - 3 Graphics - 4 $ Worth - 3. [5]

[zine]: The second issue of a fine zine, and even more beautiful than the first. This includes the Sahaj story "Without Pomp or Circumstance" by Leslye Lilker accompanied by the fluid and graceful illos of PS Nim, the [April Valentine] Kirk/Spock friendship story "Descent", the perceptive poem "Progressions" by Ellen Kobrin and other work by Rogow, Venino, Stevenson, Volker, Toni Cardinal, Hornlein, and Hunterton. "Guardian Knot" by Stevenson examines the character of Sarek on different timelines, and illuminates one Vulcan who, for me, has always been a difficult man to understand. Sensitive thoughtful stories, and art that embellishes.[6]