From Fanlore
(Redirected from D.T. Steiner's)
Jump to: navigation, search 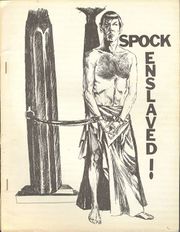 The front cover of "Spock Enslaved!," illo by Karen Flanery. Leonard Nimoy commented on this zine cover in his book I Am Not Spock: " ... The cover of one of these fanzines in particular shows a very well done drawing of Mr. Spock stripped to the waist, his lower portion covered for the most part with a draped toga exposing one bare leg, his hands manacled and a belt from the manacles chaining him to a post. The obvious suggestion is that Mr. Spock in this case is a love slave, much in the same way that women have been used for years in erotic and semi-erotic literature. I suppose in this case, turn about is fair play…" 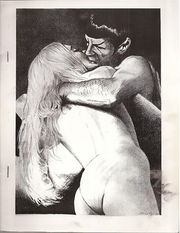 The cover of The Sensuous Vulcan, art by Misty.

D.T. Steiner is an early influential Star Trek: TOS zine editor and writer. Her press is called Love Child Press. Two of her most well-known works are The Sensuous Vulcan and Spock Enslaved!.

Zines to which Steiner has contributed