ClipperCon is a multifandom convention. It ran for six consecutive years, from February 1984 – February 1989. Many of the con program covers were done by Gina Goodwin. The first con was chaired by Marion McChesney. Bev Volker did the programming for all six years. Its highest attendance was 900.

Voyages is the con zine for this convention.

This con became the con OktoberTrek, which in turn became Farpoint.

One con that moved in to fill in the gap when ClipperCon ended was Fan-Out.

My ClipperCon experiences were also my introduction to meeting and speaking with the actors and guests on a personal basis. I'd always been the one to hang behind whenever my friends went up for autographs. Even though I'd seen all the original cast members at one con or another, I'd never approached them at all. I don't know, it was just never my speed. But at ClipperCon, out of necessity, I did interact with some of them, and I found it to be quite pleasant. I shared a "Death by Chocolate" dessert with George Takei when we took the guests out to dinner one year. I became quite enamored of Bill Campbell and his lovely wife, Teresa. Bill could tell the most marvelous stories about not only his life in the movies, but stories he had heard from those older citizens who lived in the Actor's Home, where he was employed in the PR offices. Bill had once had a pre-arranged "studio" date with Liz Taylor! Bill was as smooth and charming as he could be, but what impressed me is that after meeting you only once, he remembered your name the second time! What a marvelous man and what fond memories I have of his visits. [1]

That first year, Marion and Gerri, both STAT members active on Shore Leave, were the co-chairpersons for ClipperCon. Our name was taken from one of Baltimore's historic symbols, the great white Clipper Ships that plied the trade routes. It was also, ironically, the symbol used by the Baltimore high school that Bev and I had attended. Coincidence? I think not! Bev took the important secondary position of Program Chair. I was in charge of the Dealer's Room, and other members of our group took other positions. We imported some people from STAT like George Laurence and John Vengrowski, who ran logistics and audio/visual. They would become what is known today as "Conventional Magic". Marion sent out feelers and eventually settled on the lovely Nichele Nichols as our first guest, and we were off and running! We added Allan Asherman, long-time fan and Trek author and chronicler. He brought along a slide show sneak-peek at ST III, which was still four months from opening. ClipperCon lasted for six years, and it was a fantastic experience. This was the something else in fandom that I'd been wanting to do. I got to meet a whole new assortment of wonderful fans and to share a really fun time with them. [2]

I fully intended to sit down and write a really profound review of CLIPPERCON, held in Baltimore February 17-19, but I just couldn't find it In my heart to do so. Yes, this was the first time I have ever seen Nichelle Nichols (she is so lovely and friendly in person!), or had heard OMICRON CETI III sing (I recommend them to everyone --their set was entitled THE SEARCH FOR SPOCK, and was so beautiful it even made the Klingons behind me sniffle). Yes, they really did have a memorial service for Bill the Cat (ack!). But somehow, listing to Howard Weinstein and Bob Greenberger (formerly of STARL0G Magazine; he wrote the article about ST III in issue #80), was the thing that stuck foremost in my mind. Howie, as they affectionately (?) called him, read us chapter 4 of his forthcoming STAR TREK novel, TREASURE'S TRADE, featuring that old favorite scallawag, Harry Mudd, and a band of religious fanatics, looking to get back something that Harry (of course) stole from them. Greenberger then showed us some slides from -- YES --ST III! Of course, the two of them could not tell us some of the details, and there were no clips of the end of the story. They also felt the need to not only explain what we were seeing, but to interject their own brand of humor into the presentation. The following is a 'stream of consciousness" review of the slides, with Weinstein. and Greenberger's comments in quotes, where applicable... [a detailed, off-the-cuff explanation of many slides]... Any of you who have read the plot synopsis can fit these little tidbits into the outline with no trouble. Believe me, they got a standing ovation! Vonda McIntyre is scheduled to write the ST III novel, due to come out in June.[3]

1986 was the year the con moved from Hunt Valley to the Sheraton. 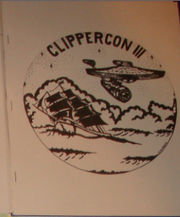 cover of the 1986 program book

This is a smaller con than the summertime Shore Leave that had taken place at the same hotel until this year. Coordinators of both cons have declared that they've outgrown the suburban Marriott, and opted for more costly downtown locations. It is not clear if the higher room rates will influence peoples' decisions whether to attend the full three days, or cut back to save money.

On the plus side, the new hotel is more convenient to train and bus lines. Driving time is cut by about 1/4 for me. Harborplace, the newly renovated inner harbor, two blocks from the hotel has lots of interesting shops and moderately priced eating places. A visit to the beautiful new National Aquarium or the fascinating Science Center is well worth the short walk during luls in con programming.

Clippercon's guest of honor was James Doohan. I'd never seen him in person before, and it was a real let-down, I'm sorry to say. There was not a little dark muttering in the ranks of Kirk fans (and others) after "Scotty's" first appearance. Asked to recall any funny happenings on the set, he pointed- ly said there was nothing funny about Bill. A bit later, this telling ex- change took place .when someone asked him which role he'd have liked to play if he couldn't play Scotty. He said, liThe Captain." This obvious animosity toward William Shatner was most disturbing and surprising. Of course, we don't know his reasons for feeling that way (they may be quite valid) but in letting his displeasure become so apparent, he showed himself to be an egocentric crybaby. Not an appealing picture. Certainly not our sweet, fatherly Scotty.

Some of the panels provided lots of food for thought. Our own Edi took part in one dealing with fandom and the real world which I hope she'll tell us about in full. I was pleased to see and hear one of my favorite Trek writers, Diane Duane (Wounded Sky) on a panel of pro writers. She was very chatty and open about all aspects of pro publishing in general and her writing methods in particular.

One interesting fact that carne out is that Pocket Books can only publish stories set during the 5-year mission. It's their "share" of the ST property. So, if anyone was wondering why there are no post-V'ger pro novels, now you know. [4]

Those Old Mundane Blues. I just returned from ClipperCon in Baltimore, with mixed emotions. On the positive side was the strong participation of Black women at this con. On the negative side was Jimmy Doohan's appearance as GoH, the first time I'd seen him in person.

Having seen all the Big Three, all the Small Five except for Majel, and many of the "minor" characters, I must say that JD came across as least likable in comparison with the character he plays (that standard was carefully formulated to apply to everyone in the cast including Walter). Mr. Doohan's rudeness to his fans and his snide remarks about other members of the ST cast suggest insecurity. At one point he made a racist remark yet seemed unaware that it was offensive. Although I well know that the actors aren't the characters, I do love Scotty, and I was disappointed.

Two fan panels at the con dealt with the relationship between reality and fantasy, and I was interested to see how many fans explicitly opted for "escapism." (Edi was on one of the panels, and I hope she can be persuaded to give an account from her perspective.) Panelists and audience spoke eloquently of the fan activities they engage in purely for love, but when asked whether they were able to pour that same energy and joy and passion into their lives outside fandom (and everyone there did seem, for better or worse, to have a life outside fandom), some replied, "No, I have an unsatisfying job that doesn't look as though it's ever going to get any better, but there's nothing I can do about it, so I'm not even trying." I came away wondering, does fandom drain energy away from our "real" lives, making it progressively harder and harder to make con structive changes? Though fandom is a terrific outlet for untapped creative energies, I see a serious problem in keeping all that energy within fandom, rather than directing it outward, into our jobs and our lives in society. Do we really expect STAR TREK to sustain us for the rest of our lives?

At another fan panel at ClipperCon on "who can play Kirk and Spock," everyone in the room agreed that no one but Shatner and Nimoy can play Kirk and Spock, and most of us (me included) agreed that STAR TREK without Kirk and Spock is STAR TREK without its essential magic.If that's true, then what will those who find STAR TREK fandom the only thing of value in our lives with the rest of our existence after the STAR TREK cast has gone to its great reward? When we're 90-odd, will we still gather around the TV set (in our nursing homes) to watch old STAR TREK videos; willwe stillbe wri ting explicit "first time" stories and slavery stories and pre-reform bonded warrior stories? Will we have happy memories to look back on besides our involvement in fandom? [5]

One panel had guest Camille Bacon-Smith; among other things, this panel discussed Mary Sues 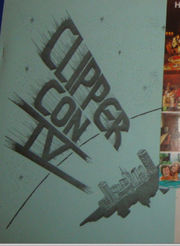 cover of the 1987 program book 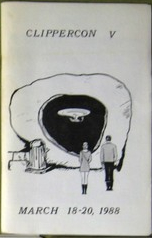 Richard Arnold was in attendance. It was the 100 con he attended. [6] 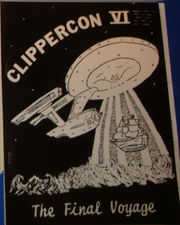 We had a tradition at ClipperCon, a communal feast on Friday evening. Marion always insisted on calling this the "Friday Night Supper," while most of us felt "Dinner" would be more fitting and elegant. But no, in her folksy, homespun way, Marion decided it was "supper", and so supper it was. As the final year approached, we decided that the committee would put on a skit, or a play, and it was all about the "Last Supper". The show was titled "So Long, Farewell, and Praise Trek", after the title of the final M*A*S*H* episode, and at one point in the show twelve (or is it thirteen?) of us posed in a tableaux of DaVinci's famous painting of the Last Supper, with Marion in the center position. The script for this zany bit of comedy was written and worked on by several of the committee, notably Bev, April Valentine, and myself, but I remember others contributing lines and ideas. ' [7]