Voyages is a gen Star Trek: TOS anthology. It is the con zine for ClipperCon.

Art has been included on Fanlore with the permission of the publisher's heirs. 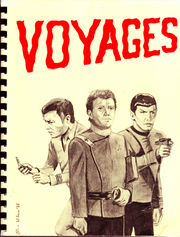 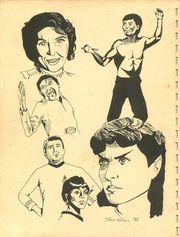 back cover of issue #2, Steve Wilson
From the editorial:

At a post-ClipperCon '86 meeting, we were brainstorming ideas to raise much needed working capital for next year's convention. Drawing from an area in which I'd had many years experience, it seemed to me that a zine would be one productive way to do it. I knew that zines can turn a profit, despite the fannish myth to the contrary. Glancing around the room at the committee, it was obvious to me that we had among us the means to make such a venture very possible. It is from this group that CONTACT, VAULT OF TOMORROW, MIND MELD, GATEWAY and a number of novels have been published. With this kind of collective talent and experience available, producing a ClipperCon zine seemed a natural. The suggestion, for which I fully expected to receive a standing ovation for my cleverness, was met with groans, less-than-enthusiastic nods of assent (well, we all had been cranking out zines for a very long time), and finally, the maximum measure of confidence, placed on me by my peers, "Sounds okay. It's your idea, so why don't you do it."... That decided, I turned my attention to what kind of zine it should be. Of course, I wanted it to be Kirk and Spock, but this wasn't CONTACT. I felt the ClipperCon zine should reflect the more diverse interests of its committee and the variety of fen who attend the convention. I also wanted it to be representative of our city, which has become a major center of Star Trek activity. In the past few years, with the demise of the old New York Conventions and the growth of Baltimore's downtown inner-harbor as a tourist attraction, focus has shifted to this town as the home of two annual Star Trek conventions, Shore Leave in July and ClipperCon in February. Although the two conventions are separate, both are proud to host the stars, guests, and fen who visit our city. Baltimore's Harbor Place reflects the nautical theme so prevalent in the seaport city and ClipperCon, in particular, is dedicated to emphasizing that theme as well. References to 'sailing the stars' even as their ancestors 'sailed the seas' have re-occurred many times in Star Trek.

The ClipperCon zine, named VOYAGES for obvious reasons already stated, is produced solely by members of the Con Committee. Although it is a group effort, and every contributor gave of his/her self to make it possible, there were a few people who put in an extra measure and this editor would like to take the time to thank them publicly for their help. Steve Wilson, who besides his art and story contributions, was an invaluable editorial assistant. Jan Davies, who also helped with editing along with doing artwork and writing. Both Steve and Jan were always there with the encouragement when at times it seemed that VOYAGES would never be launched. Thanks for insisting that it would. Sandy Zier despite an incredible personal schedule and putting out her own zine, took pity on Marion and helped out with the typing. Thanks, also, to Nancy Kippax, for proofing, corrections, and last-minute typing, and for all those who helped with the unexciting but necessary coolie labor.

The contents of VOYAGES, while still managing to emphasize the Kirk-Spock relationship (I wonder why... ) should also appeal to any reader of Star Trek material. Steve Wilson's young Saavik story will delight all those fascinated by the newest addition to the Star Trek family. Jan Davies gives Scotty fans an interesting insight to his reactions after the re-fusion of Spock has been completed. And [April Valentine] gives us a science fiction solution to a present day reality. We're also presenting, in this issue, two works from a new member of the ClipperCon committee and new writer of fan fiction. Watch for Debbie Cummins in the future. I predict that you're going to see her name appearing in a lot of zines. 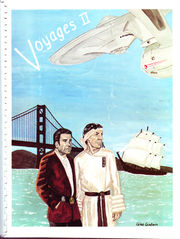 Voyages 2 was published in July 1987 and contains 172 pages, as well as some original SF fiction.

It received a Surak Award nomination.

I'd like to take a long sea voyage — or star voyage. The first is within the realm of possibility. The second is available only in dreams — or stories.

VOYAGES II will take you to the stars. In a giant starship, we will visit distant worlds as our ancestors visited distant lands in the old sailing ships. And through the written word, we hope that we can make the future come alive even as history has recorded our past. The city of "Baltimore has long been associated with the sea. Its harbor has welcomed vessels from all over the world since its establishment back in the early days of our country's independence. At Fort McHenry, Baltimore patriots held off the attacking British fleet and the ensuing battle inspired poet Francis Scott Key, being held on a ship offshore, to pen what would later become our national anthem, The Star Spangled Banner. Baltimore's close proximity to New York made it a second Ellis Island, as it received immigrants during the last decade of the eighteen-hundreds. Today's modernized and ever- expanding harbor offers a variety of activities for tourists and residents to enjoy and observe. It combines history with the present. As we move toward the 21st Century, native Baltimoreans strive to keep this vital part of our city growing with the times. By the era of Kirk and Spock, perhaps Baltimore will welcome aliens from other worlds as we welcomed those alien to America. It is not inconceivable that Baltimore will become an important spaceport just as it has been a seaport.

It is fitting, therefore, that VOYAGES be produced in such a city. Our background prepares us for the kind of attitude which anticipates the adventure of exploration... by sea or stars.

Editor's note at the end of the zine regarding zine piracy:

A WARNING TO ALL FANZINE BUYERS. There is an unethical practice being perpetrated in dealer rooms at Trek and media conventions. This is the buying and re-selling, at inflated prices, of zines currently in print and for sale by the original editor. Not only is this making money from someone else's labor, but it is exploiting the consumer who could purchase the same zine at a cost of sometimes half the price these "rip-off" dealers are charging. The dealer sends two or three unidentified "fen" to a zine table to buy a few copies from the editor supposedly for "himself and a few friends." Then these zines are marked up dramatically in price and re-sold, often at the same convention. When approached by the editors, the dealer refuses to stop this practice, claiming he can legally do this. Legally? Perhaps. Morally, ethically? Absolutely not! Beware if you see current zines being sold by someone other than the editor. Check to see if the dealer has permission to resell the zine and if the price is within line with most current zines. Some dealers do agent for editors, but their mark-up is no more than a dollar or two more than the original price of the zine to cover expenses. Check the publication date in the front of the zine. If it is within the past year, chances are the zine is still in print and can be bought from the editor or her agent at the original price. More zines are now printing price and publication date on the title page to forestall this practice. If you see a dealer who is selling inflated price zines, tell him or her that you object to this practice.