You may be looking for Whale Song, the official newsletter of the University of Alabama Star Trek Club.

Whalesong is a gen Star Trek: TOS anthology of fiction based on the movie universe. There are three issues. 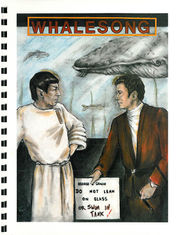 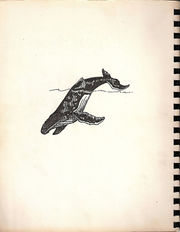 back cover of issue #1, Arleen Geller

Welcome to WHALESONG. It's really been fun doing a Trekzine again. Like Kirk and company, I feel I've made a voyage home.

Among the contributors are some well-known names and it was wonderful to have the opportunity to work with these old friends again. Thanks to all, especially the writers who so eagerly responded to my request for stories.

Not only writers and artists help an editor get a zine together. I'd like to thank Marion McChesney for the binding machine and all the commiseration, Carol Davis for expediting my press type acquisition, Nancy Goodwin for a timely visit for proofreading, and Janna Silverstein for the same, plus much enjoyable converstaion and a budding friendship.

The stories included here present some scenes we didn't see from ST II and III, plus several interpretations of what happens during the three months the crew spends on Vulcan before the voyage home begins. If you saw the flyer, you know one of the stories presents the K/S relationship -- a valid premise, I believe, given the movie universe. There is, however, nothing explicit or graphic, just a description of a love that stands the test of time and death, and I'm proud to include Ellen Kobrin's moving "Interlude" within these pages. There are also a couple of stories that speculate on the further adventures of Gillian, Kirk and Spock, Saavik and of course, George and Gracie. But I think we've just scratched the surface.

On the title page of this zine, you will find its price: $12.00 by hand. If you are a Trek fan who, after enjoying the zine, may decide to pass it on, you can certainly do so. When an out of print zine is sold from one reader to another, its price is set by the first owner and the buyer usually knows what she is getting and pays what she feels is fair. Sometimes though, zines are purchased by dealers and re-sold at double or more of the cover price. That's fair neither to the consumer nor the editor. When buying zines, check ' the publication date. If it's recent, still in print, you should be paying the cover price only. KALOMI PRESS publications are sold only by the editor or her authorized representatives.

Now, without further ado, I send you in quest of a whalesong. This is not a zine only about whales. It's intent is to capture the spirit embodied in The Voyage Home, the joy and triumph of the space-going crew we all love. 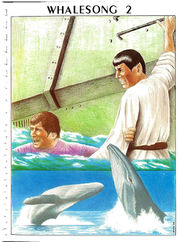 I wish to recommend WHALESONG 2, It is a zine based on the Star Trek movies. The color cover by Chris Soto is a beautiful rendition of Kirk and Spock watching the whales from the sinking Bird-of-Prey of STAR TREK IV. There is another color picture by Soto of Admiral Kirk and Captain Spock in uniform but I really loved the cover. The whole zine is dedicated in memory of Gina Godwin and has a picture of her and her little son on the inside page. Also, Gina had an unfinished story she had been working on which [April Valentine] completed and included called "Unfinished Voyage." It involves Gillian, Kirk, and Spock as they attempt to understand the whales. The first story, a post-STAR TREK I by Jessamyn Fox called "linkage" introduced an interesting alien called a "Cheshire" after thecatinALICEINWONDERLAND. Thiswasmy favorite in the zine and I see in the editorial that a sequel is planned. Other good stories are by Ambassador, Syck and Ridener, LaCroix, Winston Howlett, who did a cute one on the whales' point of view, Rousch, Bev Volker, and Morris. The Morris story, "Close to the Edge," is a sequel to the Saavik story in WHALESONG #1 called "Blood Rite." There is some poetry also. My favorite was the one on the last page by [April Valentine] called, "Past Forgetting." It is in the first person, presumably Kirk, reflecting on the miracle of Spock's rebirth. However, I can relate it to my own feelings, as I was devastated over the death of a "legend." To me, Spock is like Sherlock Holmes, a legend who should live forever. And, just like with Spock, Doyle tried to kill off Holmes, but his public wouldn't let him! Other poets include Lawchilde, Perry, and more by Bonds. Other artists include Kidd, Lee, Mills, Valentine, and 6 by Gina Godwin. All in all, an enjoyable zine worth the price! [1]

Whalesong 3 was published in October 1990 and contains 86 pages. Stories by LaCroix, Kippax, Rottler, Syck, Volker and others. 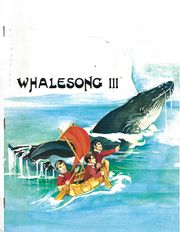 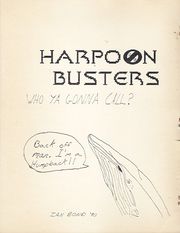