G.H.T. Journal is the newsletter for the George Takei fan club G.H.T..

The publishing schedule was three times a year, originally January, May, and September.

23pp, A4 duplicated fascinating reading for George Takei fans. This issue includes three colour photos, xeroxed photos of George's run with the Olympic flame plus and interview on it and Trek -- old and new -- and his involvement/regard of science fiction as a genre. Also an update on his Star Fund... and con reports and news of GHT's activities (what a busy boy!) and more. A loving, friendly, involved club, like George himself. *Recommended* (There are three journals a year, send a sae and 2 ircs to Ena, as above, about joining. [1]

Plenty of interesting reading. Letters -- update letters from George Takei, latest news of ST> IV. Photos, Part One of Chekov's "Russia," and many other articles. [2] 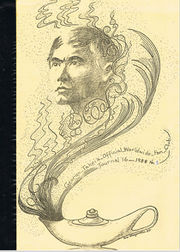 It is called "Journal 16 1988 No.1" and is the first issue to have the year and number simply used, rather than the month.

From Ena, the editor:

Greetings and welcome to Journal 16.

We have another new Honorary Member. Welcome Keith Chegwin, well known on British TV, a Star Trek fan, and sharer of Pantomime dressing room with George. Keith played Wishee-Washee to George's Genie of the Lamp in the Reading Pantomime "Aladdin" at the Hexagon Theatre. My ears are still recovering from the enthusiastic audience response to their competitive renderings of "Star Trekkin' Across the Universe". It will take George a long time to forget his introduction to pantomime. That goes for a large number of Trek fans who travelled in from all over Britain, too. They certainly did their bit to fill the theatre throughout the run. It was said to be the best attended panto for years, and with all respect to the excellent cast, costumes, scenery, effects, etc. I feel convinced that George, as the Sulu-Genie, was a major contributing factor.

In the last twelve months there have been several occasions when it seemed right to contact members with news of George between journals. It would be a great help if those who would like to have the latest information on his visits here, or whatever, would send in SAEs stamped at first class rate, as it is costly and the club finances do not cover it. SAEs would also be appreciated whenever a reply concerning the club is required (IRCs for the overseas members), or people requiring a receipt for renewals. Many thanks to the people who already do this.

While on the subject of the journals, it seems a good idea to issue them as events dictate. There will, of course, still be three a year, but last year George was here in June, August, and December. To have put out January, May, and September journals would have just missed events each time. I suggest that in future they are numbered 1, 2, and 3 along with the year. Any objections? Qr suggestions?

But relaxation was not the order of his day. Permissions were granted. A contract was signed. George found himself on a plane studying a script, and, yes, it WAS for the Genie in "Aladdin". There is no such theatre form in America as pantomime, and George had never seen one. To try and direct his thoughts into the correct channels,(e.g. "Oh yes you do","Oh no we don't" kind of thing) I hastily jotted down a few notes on British panto to ease the culture shock that I suspected was coming, and I also sent George a rough out of the story line- But each panto has its own individuality, changes, adaptations, topical references,etc. and this panto was no exception. Having acquired "Sulu", and still hardly believing their good luck, the Reading "Aladdin" script was adjusted to accommodate a Sulu-Genie. He did not live IN the lamp. The lamp established contact with him in his Galactic Home, the Enterprise, and Scotty did the rest with varying degrees of success. Trek phrases infiltrated the dialogue, from "Scotty's been at that Saurian Brandy again" to "Beam me up Snotty!" And to add credence to the theme The Enterprise glided across a darkened stage, passing a stray planet (Earth?), to the strains of an all too familiar tune. But sitting in the PanAm plane, George did not really know what awaited him at the Hexagon Theatre. He knew he had to sing, and dance. He did not know the melody, the words, or the steps. He knew he had jokes to tell, but he did not understand the topical references. Neither did .he credit the "corny-ness" nor the vulgarity. The cultural shock was beginning!

His mission was a great success, but then there was never any doubt of that, as he makes friends wherever he goes. Alerted by our efficient "GHT" President, Ena Glogowska, as many members of his fan club as possible -and other Trek fans - were going to be there to cheer him on at his first night,(indeed, in his first performance in a British pantomime). We all put on our best bibs-and-tuckers, so that no sign of being Star Trekkers was visible, except for a few Vulcan signs of greeting. However, we need not have worried, because practically the whole show was written round Mr. Sulu, with an occasional reference to Nora Batty, Eastenders, and the ever cheerful Cheggers (for overseas members this is Keith Chegwin), helping to make it a great evening. Indeed, George and Cheggers had the audience competing to make enough noise to raise the roof singing "Star Trekking Across the Universe".

The costurres in the show were gorgeous, and George did get to wear soma beautiful robes, all decorated (mostly on the sleeves) with Starfleet insignia, and at his first appearance on stage he materialised out of a golden shinntsr with his Command Gold type uniform on, similiar to the original series. There were many Trek fans there, I don't think they were all "GHT" members, but there was always a loud shout when Cheggers called out "Any Star Trek fans here?" Perhaps a silly question with "Sulu" in the cast!

At almost every performance George came out to the stage door to speak with fans and sign autographs. Sometimes he had to keep them waiting a while, but he hated to disappoint them, especially when he hnew that they had travelled a distance. The last week of the pantomime in particular, fans made a desperate effort to be there, and they waited at the stage door in droves. Unfortunately there seemed to be a series of parties for George to attend in the theatre - one for the staff, one for the juveniles in the show, one for the cast - and it was deemed necessary that George attend each and every one. He was sadly torn between disappointing his loyal supporters,and upsetting the party schedule and disappointing the rest of the cast. The fans, he knew, would understand and forgive him. They did. Many of them had long journeys and could not wait until George finally came out,and they left, resigned but confident they would see him again some time in the future at a Con. They travelled in from Leeds, Leek, Portsmouth, Cornwall, Sussex, Middlesex, Essex, Kent, Wiltshire,and all over the place. But whenever it was possible George took time to be with them. On two occasions he even met groups of them for dinner after the show, and he talked with them until he almost fell asleep at the table. It was valued and appreciated by them all.

It was not only the fans who appreciated him. At the hotel the managers and staff voted George THE nicest guest they had ever had, and they organised a special dinner in his honour - something, I believe, that they had never done before. George, for his part, certainly enjoyed his stay at the Ramada, and treated it as home for his six weeks in Reading.

There is so much more to say about George's pantomime debut, but space is out. It was good to see so many fans there, especially Margaret Bertram, the Grandma  of British Star Trek, and George's adopted Grandma in Britain, who was well enough to make the journey, see the show, and dine with George and other tans afterwards. Come back again one day for another pantomime, George.

"Hi." said Mr. Take! as he shook my hand. I asked him who I ought i contact at paramount as I had an idea for Star Trek. His reply was devastating. Due to plagiarism you have to have your script/ideas published.

"You have some excellent publishers here in London." he helpfully said.

How do you get twelve lines of dialogue published. When you do not-have t-.he experience of script writing, star Trek or its characters, to know whether the idea has been used. Although a Star Trek fan my interest and knowledge did not extend to being a Trekkie.

Just rub your lamp and your genie will appear! Your genie in the guise of our Mr. Sulu. Unexpected and totally welcome, George filled the post of genie very admirably by all accounts, to the great delight of his English fans. This January issue contains reviews -- both fan and commercial -- pictures and club news. Ena has always given good value and this issue continues the tradition. [3]