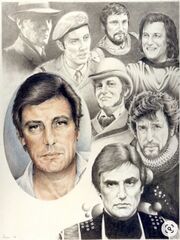 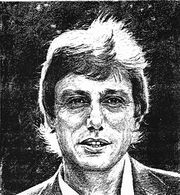 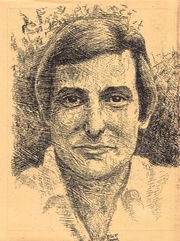 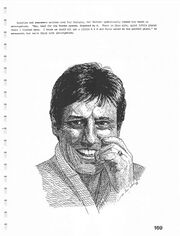 He also twice appeared on Doctor Who, in Timelash (Doctor Who Episode) as Tekker and in Doctor Who and the Silurians as Captain Hawkins. Darrow's starring as Thomas Doughty is one of the major reasons for the fannish interest in the made-for-TV movie Drake's Venture, mostly due to the parallels of this role to that of Kerr Avon. 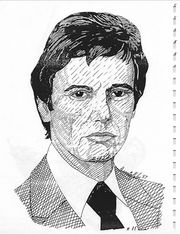 a portrait of Darrow, printed in 1988 in Southern Comfort #4, the artist is Theresa Buffaloe.

Intricate and Involved Relationship With Fans and Fandom

They make you what you are. I loathe some people’s attitude. There are one or two people, who shall be nameless, that I know very well who ignore letters and despise people who write in and I feel like thumping actors who say: “No, I don’t bother: I throw them straight in the wastepaper basket.” I think if people take the trouble to write, you should reply. Without them, you’re not going to get anywhere. I just wish some of the fans knew which people these were so that they didn’t support them any more and they wouldn’t get the work. I feel very strongly about the relationship you have with the people who watch you. That’s why I go to science fiction conventions: because that’s part of my job. [1]

Paul Darrow was a popular Guest of Honor at cons and had a close relationship with several big name fans. This personal involvement is at least partially responsible for Darrow's role as major player in the Blake's 7 Wars (also see Open Letters by the Darrows, Paul Darrow's Statement Read Aloud At The 1989 Gambit Convention), in the course of which Darrow also expressed his ire at slash fanworks involving his character.

Darrow visited widely on the convention circuit, dined with fans who traveled to see him, and joined with them in speculating about the psychology of his character [Kerr Avon]. Surrounded by fiction writers, Darrow himself wrote a book about the early life of his character, Avon. [2]

One fan's 1995 comments regarding Darrow and slash fanworks:

Throwing in my two cents worth on the Paul Darrow issue. From what I know via either talking with him, or hearing reports of other people who had talked even more extensively about the issue, was that he did really loathe slash - his opinions were incredibly conservative in general - but that he was perfectly capable both of pretending that it bothered him less than it did, and also not minding so much if he happened to like a particular person who was involved in doing it. Not very consistent, but very Darrow. [3]

Regarding kissing Paul. One of my friends (an Avon fan) was getting her picture taken with him at a con-organized photo session. They were cuddled up together quite cozily. As she started to walk away, their eyes met and it was if they mutually decided to kiss. It was very natural. I was serving as camcorder person for my friends during the session and caught it (and her smile after) on videotape.

Paul, more than any of the other B7ers that I've met, appears to glory in attention from fans. [4]

He also was very involved in some print zines, specifically Horizon Newsletter.

Darrow's pro book Avon: A Terrible Aspect about his Blake's 7 character Kerr Avon (1989) is almost universally disliked by the fandom. Nonetheless, despite periods of severe illness, Darrow continued to be involved in producing content in the role of the character as well as about the character right up until his passing in the early summer of 2019, primarily for Big Finish, for which he reprised as Avon in a large number of audio plays. Among these Big Finish productions is a further trilogy of novels about Avon written by Darrow, titled Lucifer, and Darrow's autobiography You're Him, Aren't You? and the associated audiobook, read by Darrow himself.

In an interview for Starburst Magazine during the filming of series 4 of Blake's 7, Darrow discussed his relationship to his character.

How much of Avon is Paul Darrow? I think Avon is a lot like I would want to be, but not as cold and ruthless. You see you have to put him in the circumstances the programme presents, he's living in an extraordinary situation and you've got to be an extraordinary person to be able to cope. He's also a genius at self-preservation and completely self-centred. I don't think I am, I hope I'm not. I do have an affection for him though. He does things we wish we'd thought of doing in a certain situation, and he's not afraid of anything. He's not even afraid of death.

Upon his return to the role for Big Finish, Darrow reflected on the influence of Avon on his life:

Has the character of Avon ever really left you? That's a very good question and a tough one to answer. I suppose it's never really left me in a way; a part, by a process of osmosis, inculcates itself into your psyche. [...] It's always with you to an extent if you play it for a long period of time. [...] I think yes, to a certain extent, it does linger. 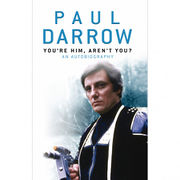 At this point, Darrow had already titled his autobiography You're Him, Aren't You? (2006) after being recognised as the actor who played Avon in the street, and all chapter titles in the autobiography are references to / quotes from Blake's 7. In the autobiography, Darrow writes

Blake's 7 took four years of my life. I've been an actor for forty years.

How can it be that something that constitutes but ten per cent of my working life has had such an influence upon my life as a whole? On TV, I have performed in many different programmes: series such as Emergency Ward 10, Dombey and Son, Murder Must Advertise, Doctor Who, Making News and The Legend of Robin Hood. In the theatre, I've played such parts as Cassius in Julius Caesar, the title roles in Luther and Macbeth, Elvis Presley and many others that I sometimes struggle to remember.

I walk down the street, or am shopping in a supermarket, and rarely does a day go by - this is quite true - that somebody doesn't say to me, 'You're him, aren't you?'

I do not complain. I don't mind being forever Avon.

Just keep in the back of your mind, Darrowmaniacs, that Mr. Darrow has quite a different idea of the character of Kerr Avon than that beloved by most of us. You only need to read his novel and explore his input into the characterization in Season 4 to catch on to this. Not better, not worse, just different.[8]

I can only give a personal opinion, based on extensive personal contact with Paul Darrow in previous years. He appears to see Avon as a male "mary sue" type character for himself, which means Avon must be devoid of tender emotion toward women, is a lot more actively violent than the character on the show, and is less inclined toward loyalty with his associates. Up until Darrow became a scripting influence on the 4th Season, Avon was definitely showing a growing protective streak (non-verbalized, of course) toward his crew, and he definitely had a soft spot for the ladies. Contrast this with the violent sex in A:ATA.

I recall a long session after hours at a convention hotel, about 10 years back, where Darrow and a bunch of fans were playing "Oligarchy", a brilliant board game invented by Liz Sharpe that adapted the Monopoly game to the B7 universe. One of the rules of the game was that you HAD to play in character. Naturally, we were delighted to have Paul playing as Avon. As the game went on, though, a peculiar ruthlessness crept into his play and the Avon he was playing was clearly different. This was a topic of conversation among the other players, days after the game was concluded. You don't get much of a better demonstration of the differences between Avon, as shaped by the B7 writers and Avon, as visualized by the actor. [9]

Darrow appears as RPF character in several fanfics within the Blake's 7 fandom, most notably in the fanzine Totally Imaginary Cheeseboard and its sequel The Other Side of the Coin, in which Darrow and his character Kerr Avon switch places. 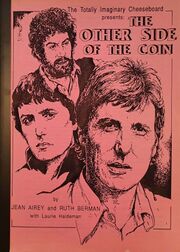 Cover of The Other Side of the Coin by Gail Bennett

In Memorial: Fan Events and Fanworks

Following Darrow's passing in 2019, many fans were inspired to activities in his memory, alongside several public-facing obituaries.

The Horizon fan club planned a 2020 convention called Forever Avon, 'a one-day fan event memory of the legendary Paul Darrow, in aid of The Dog's Trust.' The event is titled after the above quote from Darrow's autobiography. Due to the COVID-19 pandemic, the event had to be postponed to 2021.[10]

Also on Horizon, fan KentishSpaceRat proposed to produce 'an unofficial short story book in memory of Paul Darrow and to raise money for the World Wildlife Fund', equally titled 'Forever Avon'. It, too, had been postponed due to the COVID-19 pandemic, but as of early September 2020 is planning to be released in late September/early October.[11]

The third issue of digital fanzine Rebels and Fools (August 2019) is dedicated to the memory of Paul Darrow, with Kerr Avon featuring on the cover, an editorial addressing Darrow's passing and several fanworks within the zine seemingly inspired by his memory.