From Fanlore
(Redirected from Orac (convention))
Jump to: navigation, search

ORAC was a fan run Blake's 7 convention held in in San Francisco, CA. The convention also had several actors and show writers as guests, along with fan run panels, a dealer's room, a masquerade, an art show, and a charity auction.

"Join us for an ALPHA GRADE B7 convention... Show your support for Blake's 7, have a great time with other fans and help us help KTEH, our local PBS station on APRIL 9 and 10, 1988 at the CLARION HOTEL, located near the San Francisco airport. in order to provide an uncrowded, high quality convention experience, attendance will be strictly limited. Memberships will not be sold at the door, so register early. Make checks payable to ORAC for $40 until Dec. 15, $45 until Feb. 1 and $50 after Feb. 1."

Guests were to be Terry Nation, Sally Knyvette, and Brian Croucher, but according to a statement in the flyer for 1990, this did not occur. It is unknown who were the guests.

Confirmed guests were Terry Nation, Sally Knyvette, and Brian Croucher, but Knyvette did not attend. 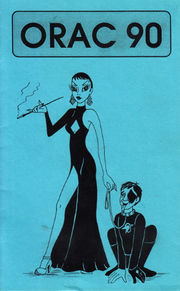 cover of the 1990 program book, the illos in this book are by Melody Rondeau

All proceeds from the con were to go to KTEH, the local PBS television station.

There was a "Dead Travis Party." -- "We hope many of you will stay Sunday night for the infamous Dead Travis Party. Observe the dead come back to life as we celebrate the close of the convention. We'll have food, a no-host bar, videos, and a great time will be had by all."

Programming (from the Orac 90 progress report):

According to the first progress report, these would be included in the programing, but they do not appear in the program book (at least in this form): "Reading Circles (G-RandX): Bring your favorite zine story or a work in progress to read," "How to Start a Good Rumor. For instance, have you heard the one about the well-known San Diego fan writer who is going to England without her husband?," "The Slash panel Pictionary," "The Tarrant panel (yes, that one): What would you do if you were stuck on the same ship with Toothy? Would you do it with a gun. a knife, or an airlock control button?," and "Fan publishing: Do's. Don'ts and How-To's."