Drake's Venture is a 1980 made-for-TV film depicting Francis Drake's voyage of circumnavigation. It was produced to commemorate the 400th anniversary of the event and stars John Thaw (Inspector Morse) as Drake, and Paul Darrow (Kerr Avon from Blake's 7) as Thomas Doughty. The film focuses on the voyage's most controversial aspect, the execution of Darrow's character Doughty for mutiny. The film has only aired twice: once in the UK on December 28, 1980, and once in the US, on 'Masterpiece Theatre', March 27, 1983.

Much (if not all of the fandom) was/is comprised (almost?) exclusively of Blake's 7 fans,[1] drawn by Paul Darrow in a similar second-in-command/thinks-he-should-be-equally-in-command role. Shimere277 discussed the appeal of the film thus:

So why a fandom for a movie that’s almost 30 years old, has only been shown twice, and was never released commercially? The movie itself is of very high quality. It has excellent production values including authentic costumes, sets and a wonderful full-scale reproduction of the Golden Hinde. The acting, especially by Thaw and Darrow, is first-rate. But seriously, folks, those aren’t the real reasons. The truth is that the movie has three essential qualities which make it ripe for perpetuating a fandom 1) Two lead actors with fanatical cult followings who believe them to be Teh Sex Incarnate. And Darrow has never looked better. 2) So much slashworthy UST you can eat it with a fork. 3) A horrendously dismal ending which immediately inspires the viewer with a desperate desire to create fanfic AUs.[2]

A particular draw for Blake's 7 fans also seems to be the potential to parallel the relationship of Doughty and Drake as portrayed in the film with that between Avon and Blake in Blake's 7. Crossovers with Blake's 7 centred on this parallel exist since the zine era fandom. Powerplay (Blake's 7 zine)'s first issue features the crossover poem The Great Lord Shiva's Dance by Susan Matthews (p. 87), as well as a corresponding artwork by Suzan Lovett, which enhances the parallel by avoiding to show Drake's face and thus stressing the curly hair which Blake and Drake have in common. 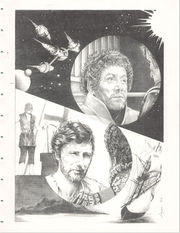 DV_Squee was founded on Livejournal in March 2007 by Shimere277, who intended to "get the Drake's Venture fandom a home outside of B7 (and to give the other long-suffering B7ers a rest!)".[3] DV_ficarchive (also on LJ) was founded in July 2007, "with the intent of converting the archive into .pdf files on an occasional basis to be made available as a Drake's Venture downloadable zine".[4] As of August 2020, four writers have uploaded their fic (total: 76) to Archive of Our Own, but this figure is not representative of the total number of fanworks created by this community. Shimere277 alone has over a hundred Drake's Venture fanworks on their LJ masterlist.[5]

Aside from fan creation, historical research became a large part of dv_squee's activity, including the discussion of existing academic publication about Francis Drake's circumnavigation and the consulting of primary sources.[6] Notable among these activities are the transcription of Thomas Doughty's will by entropy_house[7] and the creation of a bibliography of Thomas Doughty.[8]

Most of these communities and their fans seem to have dropped out of the fandom by the Migrations away from LJ. The latest (non-crossover) fic posted on AO3 dates to 2014. However, interest in Drake's Venture continues into the 21st century via the Blake's 7 fandom, with a crossover fanfic by NanaSally posted to AO3 in 2018 and Drake's Venture artwork of Paul Darrow's Doughty created by Jaelijn on Tumblr in 2019.

SQUIE: The rallying cry is Squie! with a medieval S, and -ie- because errrr... DoughtIE?

PUPPIE: Considering the sadness and pleading in Doughtie's eyes (when he's not angry, that is) most of us call him the Puppie (which is fine since Drake was Queen Elizabeth's seadog). There are a number of gratuitous “Fquie, Puppie” posts to remind us of our hero's glory.

Penguins: There are no penguins in the movie and it's the only historical mistake. There would have been penguins on the beach near San Julian argentina, website Here, the cursed place where Doughtie died. So there are lots of penguins in the fics. They have various functions: aliens, saviours, protectors of all that is Doughtie...

Eyelashes: Darrow – errr, Doughtie - has the most stunning eyelashes I have ever seen. How Drake can remain unmoved by this soft fringe of silk is beyond my comprehension.[9]

“Chocosexie” – adjective describing Doughtie, literally a new flavor which combines the appeal of both chocolate and sex.

Popular pairings – Drake/Doughtie, also called FD/TD or Sea Dog and Puppie is the major canon pairing, in 98% of the fics. Rarely, a Doughtie/Vicarye or Doughtie/Nuno pairing pops up. Also there are occasional pairings with characters from outside the canon but inside the historical parameters like Maria, Mary Drake and John Doughtie. Attempts at crossovers pairings have been made, most notably Doughtie/Blake (Blakes 7).[11]

Some fics are written in Elizabethan English.[12]

Fans have produced fanvids, such as 'Let Go', vidded by Shimere277, icons and a fanmix.