Space Commander Travis, Federation officer and Blake's nemesis, is one of the antagonists in Blake's 7 series. He appears in the first two seasons and is portrayed by two different actors.

Travis is the Federation officer in charge of capturing Blake, although his enthusiasm for doing so leads him to lose his commission a couple of times. This Time It’s Personal, because Travis lost an eye and an arm (the latter being replaced by a laser beam weapon--i.e., he can’t tell his arsenal from his elbow) to Blake during a battle with the Freedom Party. Travis 1 was played by Stephen Greif, who, however, was replaced by…

…Brian Croucher, who really doesn’t look, sound, or act very similar to Travis 1. Just another link in the B7 Suspension Bridge of Disbelief. Most B7 fen have a strong preference for one Travis or the other. I’m a T1 supporter myself. Classicists in the fandom assure us that the plural of “Travis” is not “Travii” but “Traves.” But then, the plural of “Elvis” is not “Elves.” [1]

I became a much bigger fan of Travis 2 after realizing his S2 character arc was pretty masterful craftsmanship - a lot of the rich ethical gray areas that make B7 so interesting, like whether there's really such a difference between the bad guys and good guys, and whether everyone doesn't truly think of themselves as the good guys despite the means they use to reach their ends. It's more unusual to see a "bad guy" who was unable to let go of his idealism and loyalties, even when they were inconvenient, rather than a "bad guy" who could when it suited his needs, and the theme of that narrow line a true fanatic walks between good and evil is better-served by showing Travis as another version of the ideological fanatic and a counterpoint to Blake; there's a real irony to how the Travis 2 and Blake character arcs mirror each other, and it makes the picture of political fanaticism much richer. [2]

The versions of Travis portrayed by Stephen Greif and Brian Croucher are often referred to in the fandom as Travis I/Travis 1 and Travis II/Travis 2, respectively. Many fans of the character strongly prefer one version of Travis over the other (more often Greif's over Croucher's, at least during the earlier years of the fandom), but some are fans of both. 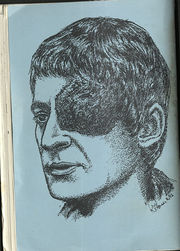 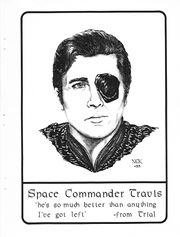 Travis II on the inside art from Time Distort #1 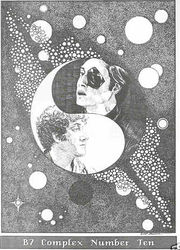 Front cover of B7 Complex #10 by Deb Walsh. The artist commented: "One of my favorite issues, the theme was Travis and Blake as Yin and Yang. Looking back at this particular issue, I feel that my abilities as an illustrator were at their peak. Some 10+ years later, I was flipping through this issue, and i was really impressed with the quality of art. I checked the signature and was quite surprised to find my own." [3]

Fanworks that focus on Travis often explore the theme of the Federation's repressiveness. Some authors come up with in-universe explanations for the change in Travis' appearance and personality that occurred because the actor playing him was replaced.

While Travis is an example of a canonically disabled character, this subject is rarely explored in fanworks.

In fanfiction, Travis had been paired with many characters. No pairing with him is significally prevalent, though the most popular are Blake/Travis, Avon/Travis, Servalan/Travis and Travis/Kiera. Some rarepairs like Cally/Travis have quite a lot of fanfiction written about them because of few dedicated fans. Many (but not most) fics that feature pairings with Travis are non-con or dub-con.

Blake/Travis fics usually add sexual dimension to Travis' obsession with Blake. Some of them portray the attraction as one-sided, others suggest that they used to be lovers, usually pre-canon. The essay Recurring Themes in Blake's 7 Fan Fiction describes stories with this pairing as "one answer to the ever-popular question "why didn't Blake kill Travis."

Though Avon and Travis spoke to each other in only one episode, the number of fics with this pairing for a long time was similar to that of Blake/Travis fics.

Servalan/Travis fics usually show her having upper hand in the relationship, reflecting their dynamic in canon.

Kiera (the spelling of the name may vary), mutoid from the episode Duel, is one of the most popular one-shot characters in the Blake's 7 fandom. The imaginings of her backstory often include her relationship with Travis, romantic or platonic.

Fics about this pairing are usually PWB stories with the premise that Tarrant and Travis knew each other when Tarrant studied in the Federation Space Academy.