You may be looking for Blake's Seven Encyclopaedia, a Blake's 7 encyclopedia by Anghelides & Lovelady. 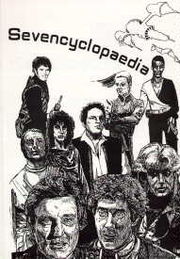 Sevencyclopaedia is a resource to the show by Neil Faulkner. It was edited by Judith Proctor.

The original, print version was published by Judith Proctor. The zine is A4 size, with 146 pages in a double-column layout totalling 117,000 words. The binding is glue with the spine taped. The black-and white cover is by Gavin Miller.

From a distributor, Knightwriter: "Everything you ever wanted to know about the B7 Universe From AA Security Clearance to ZVP (Zerok Vegetable Processing)! If it was seen on screen then it's in the Sevencyclopaedia. If you've looked for something in the Programme Guide and not found it, the odds are high that you'll find it here." 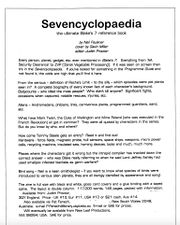 Every person, planet, gadget, etc. ever mentioned in Blake's 7. Everything from 'AA Security Clearance' to ZVP ('Zerok Vegetable Processing']. If it was seen on screen then it's in the Sevencyclopaedia. If you've looked for something in the Programme Guide and not found it, the odds are high that you'll find it here.

From the serious - definition of Roche's Limit - to the silly - which episodes were pot plants seen in? A complete biography of every known fact of each character's background.

What have Mark Twain, the Duke of Wellington and Mme Roland (who was executed in the French Revolution] all got in common? They were all quoted by characters in the series. But do you know by who, and where?

How come Tommy Steele gets an entry? Read it and find out!

Places where the characters got it wrong but the intrepid compiler has tracked down the correct answer - who was Blake really referring to when he said Lord Jeffrey Ashley had used smallpox infected blankets as germ warfare?

Bird song - Neil is a keen ornithologist - if you want to know what species of birds were introduced to various alien planets, they are all lovingly identified by appearance and song!

An expanded version of this zine is archived online here (Wayback link) at the Hermit.org site. It contains Neil's original entries, plus additions mainly by Murray Smith. It lacks the original cover but is illustrated by lots of frame grabs, mainly from Lisa's Video Frame Capture Library.

The online version remains widely used by B7 fans and is often recommended. Executrix describes it as an amazing work of fan scholarship.[1] Nicola Mody calls it indispensable.[2]

Note: If the hermit.org website is down, you can access archived pages for each letter of the encyclopedia via this link.