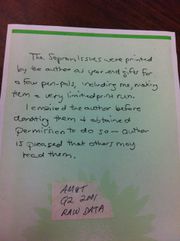 Donation letter accompanying the copies housed at University of Iowa Fanzine Archives
Sopron is a slash and het Blake's 7 zine, written and published by Executrix. It was published in very small quantities and sent as Christmas/New Year presents to other members of theFreedom City mailing list in 1999-2002-ish. Many of the stories are now available online.

Executrix describes the zine's aesthetic as "demented type ornaments, naff photo illos and slightly peculiar layout."[1] Of the contents she notes: "I like my stories just the way I like my skirts: short and tight. The skirts start out black, deliberately, sometimes the stories just turn out that ... There's something in each of [the stories] to offend at least somebody. Most of these stories are slash, but flagrant heterosexuality occurs in some. Duck, here it comes again: pastiches! a crossover!"[2]

Currently no information beyond that it existed. 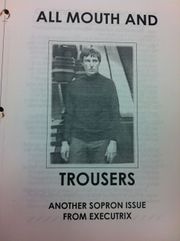 issue #2 front cover
Sopron #2 was presumably published in December 2000 and bore the title 'All Mouth and Trousers, another Sopron issue from Executrix'. It had ~50 pages.

A Blake/Servalan! Although there's not much Servalan in it, to be honest, and what there is a little... too strange for me. The Blake stuff with him discovering that people are being drugged, etc, is good, and then it goes into something... that may or may not be a fusion of something I don't know.

A Federation Officer - Avon/Tarrant, Tarrant/Servalan This one makes me quite sad! Even though I know it's not real. Seriously though - it's a good idea and doesn't outstay its welcome. User Interface - BtVS crossover, Avon/Angel, Avon/Giles

Not being in Buffy (or rather Angel) fandom, I feel like I am missing a few things here, although I did watch the show(s) so I have a vague idea. I enjoy Giles's entrance and the idea of Cordelia having to play Anya in the movie of her own life because she's not a good enough actress to play a major part such as Cordelia. Mostly though I feel that this one could have used a bit more explanation about what was happening and why, up to and including why the people who were sleeping together were sleeping together. We don't even have canon examples of (for example) Avon and Angel interacting to fall back on as explanation, here.

I am familiar with one of those, not at all familiar with the other, but it seems to be written by the man who wrote the Empire Strikes Back, which speaks well of it. The two parts (well, three I suppose if you include B7) work fairly seamlessly together despite being very different, though Tarrant has to go from one extreme to the other quite quickly. Servalan's quest for power makes everything else pretty plausible, though.

Back to the Raft - Blake/Avon

Strange and inexplicable, but not unpleasant. Avon teleports down into the 19th century where he has sex with Byron. This is all related in the form of a letter by the poet himself, which is well done and a nice gimmick. My criticism here would be that Kerr Avon is an attractive man, but not so insanely attractive (or as willing to have sex with almost total strangers!) as this fic and User Interface believe. This is a harsh comment that I dare say this fic, which aims I'd think largely to amuse, does not necessarily deserve, but it is what I think.[3] 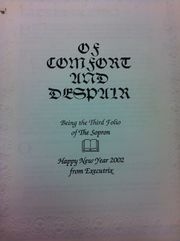 issue #2 front cover
Sopron #3 was presumably published in January 2002 and bore the title 'Of Comfort and Despair, Being the Third Folio of The Sopron'. It had ~70 pages. The issue was supposed to be 'the Shakespeare Issue [No Holds Bard!] and it sort of is. However, it contains five stories and the longest one has very little to do with Shakespeare'.[4]

Good, funny. A bit too similar to MacBeth perhaps, but that's sort of by the by. I do like the fact that whereas it was a Big Deal to kill Duncan in MacBeth and there was a war and stuff, leading our title character to his death, in the fic and the world of the Federation Servalan points out that if you're stupid enough to be murdered, you deserve it.

Ostensibly a sequel anyway. Mostly it isn't. I really like this one. Servalan forces Travis to go 'undercover' as Blake's boyfriend, despite homosexuality being a crime. Travis feels very annoyed and upset - and doesn't exactly 'choose' the Federation because he never so much as claims to like Blake, but rather is grateful when the whole thing is over. V good Blake, too. Kind of annoying, but also charismatic. I like this one a lot.

Sing for your Supper - fusion with 'Comedy of Errors', Blake/Rashel, implied one-sided Blake/Avon

Fortunately I have now seen Comedy of Errors, so I understood what I was letting myself in for ;) It's a v good idea, actually - nice use of the clone for comedy business. I almost feel it could have been pushed more! And the Vila/Rila business barely happened, which is also a shame. Apart from the fact that this Avon is in love with Blake (hooray!), which always makes me like something more/find it more plausible, the other thing I want to say about this is that the alternate Blake is called 'Reg Black'. Order of the Phoenix came out in 2003, so there was no way that this fic (written in 2002) could have know that Sirius's brother was called Regulus. For amusement, I searched AO3 for Regulus's tag. He has 1045 fics, at time of writing, to Blake's 642. Guess we know which twin made it.

I like this one too (and nice title), although I think the move from boxing to forest-with-no-memory is a bit loose, and the Avon pretending to be himself thing could have been played harder. It's difficult to know what will bore your audience/be too close to the original (see MacBeth comments above) and what they will love and want excess of. I am easy for any mistaken-identity trope. Interestingly the ending in the zine is different enough to the one on AO3 to make me think it has been re-written, rather than simply not copied in its entirety. Both work - I slightly prefer the zine version.

I read this right at the beginning of my time in B7 fandom. I re-read it for this review and liked it a lot better. I don't think I knew what to expect from Executrix fic a year ago, or what to expect from B/A fic. I also don't think of Avon as particularly fay whereas E really does, and then in PairBond he doesn't really get together with Blake properly (because this time his most important relationship is with Anna) so this fic rubbed me up the wrong way initially, but now I like it a lot. I just had to click my brain into gear. The stuff about Avon succeeding with the heist works really well, as does the stuff about Blake's shipboard democracy annoying him. It also has another subtly written but relatively erotic sex scene too, in which Avon doesn't even take his trousers off (though I am sure they're very lovingly described). V good.[5]