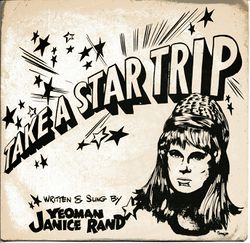 Grace Lee Whitney was an American actress and singer, best-known for her work in three classics: Star Trek (TOS), the film "Some Like It Hot" with Marilyn Monroe, and The Outer Limits episode "Controlled Experiment."

Originally contracted for at least the first 13 episodes of Star Trek (TOS), Whitney was fired after completing the first eight shows. In her book, The Longest Trek, she stated that she had been sexually assaulted by an executive associated with the series.

Whitney returned to the franchise to reprise her role as Transporter Chief Rand Star Trek: The Motion Picture (1979). She also appeared in Star Trek III: The Search for Spock (1984), Star Trek IV: The Voyage Home (1986), and Star Trek VI: The Undiscovered Country (1991), with another promotion, to Lieutenant Commander Rand.

Five years later, to celebrate the 30th anniversary of the franchise in 1996, she returned in Star Trek: Voyager episode Flashback, along with George Takei.

Whitney recognized the importance of Star Trek fans to her career and, as such, agreed to appear in fan films. She reprised her role of Janice Rand in two internet Star Trek episodes: Star Trek: New Voyages and "Star Trek: Of Gods and Men". "New Voyages" premiered on August 24, 2007, while "Of Gods and Men" made its debut in late 2007. The fifth episode of Star Trek Continues, "Divided We Stand" (released 26 September 2015), was dedicated to her "lovely and endearing spirit". 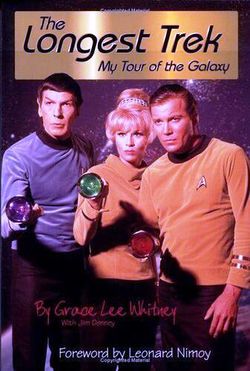 Cover of The Longest Trek.

In the mid-to-late 1970's, Whitney recorded a number of songs based on Star Trek (TOS) and Star Trek: The Motion Picture. The music was composed by her then-husband, Jack Dale; she wrote the lyrics. Whitney performed her music at numerous conventions from 1975 to about 1985, and released a 45 rpm record. The A side featured Disco Trekkin, and the B side was Star Child. She released two compilation albums of her original songs entitled Light at the End of the Tunnel in 1996, and Yeoman Rand Sings! in 1999, produced by Anthony Wynn. These releases included such recordings as "Charlie X", "Miri", "Enemy Within", and "USS Enterprise".

Whitney's memoir, The Longest Trek, was published by Quill Driver Books in 1998. The foreword is by Leonard Nimoy. Synopsis from the book cover:

She opened for jazz great Billie Holiday, shared the set with Marilyn Monroe, and flirted on-screen with Jack Lemmon. In her dream role, Gene Roddenberry beamed her aboard the Starship Enterprise as Yeoman Janice Rand in the original “Star Trek” series. But a terrifying sexual assault on the studio lot and her lifelong feelings of emptiness and isolation would soon combine to turn her starry dream into a nightmare.

She encountered actor DeForest Kelley while in-line at the unemployment office in the early 1970's and he told her about the Star Trek convention phenomenon and that fans at the events were asking about her.[1]

Whitney was a very frequent guest of honor at many science fiction conventions and Star Trek conventions. She appeared at thousands of conventions, worldwide, over a period of 40 years from 1974 to 2014.

In early convention appearances, she would invite fans onstage to read scenes between Captain Kirk and Yeoman Rand, in addition to talking about her work on the show and answering questions from the audience.