Anthony Wynn is an author whose works include the Star Trek interview book Conversations at Warp Speed and "Remember with Advantages", the theatrical memoir of actor Barry Morse.

Anthony's interest in writing blossomed as editor of the fan publications the Reconnaissance Newsletter and the Reconnaissance Quarterly, followed by the Starfleet Supplemental Communiqué for Starfleet, and The Fleet Herald for Trek International, both Star Trek role-playing fan clubs. His first published article was an interview with actor Martin Landau published in SFTV magazine. His work has also been published in issues of FILMFAX magazine. 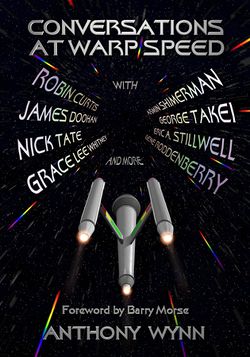 Conversations at Warp Speed was published by BearManor Media in 2012.

The volume features interviews with actors and other personalities who were there at the inception of the original Star Trek television series, including Grace Lee Whitney, George Takei, and James Doohan. Also featured are other performers who appeared in later series and film incarnations, such as Robin Curtis, Nick Tate, Bibi Besch, Kitty Swink, and Armin Shimerman.

The book also includes an interview with the creator of Trek, Gene Roddenberry, and the final interview conducted with actor Paul Carr.

Barry Morse also penned the foreword to the book prior to his death.[1]

He produced two music albums for entertainer and actress Grace Lee Whitney: Light at the End of the Tunnel in 1996, and Yeoman Rand Sings! in 1999. These releases included a number of her classic recordings, such as "Charlie X", "Miri", "Enemy Within", and "USS Enterprise". Wynn also organized and chaired several Star Trek conventions featuring Grace Lee Whitney in Oregon, including the cities of Portland, Eugene, Salem, and Ashland. Additionally, he worked with the actress on other conventions and appearances in San Antonio, Los Angeles, and New York City. 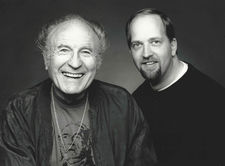 Wynn co-authored and edited several books focused on actor Barry Morse. These included the Morse autobiography "Pulling Faces, Making Noises" and the Morse theatrical memoir, "Remember with Advantages". He also co-wrote "Valiant for Truth: Barry Morse and his Lifelong Association with Bernard Shaw"[2], "Merely Players: The Scripts", and "The Wit and Wisdom of Barry Morse". Wynn also toured with Morse in the United States and Canada as stage manager for performances of the actor's one-man stage show "Merely Players". In addition, Morse also performed the role of George Bernard Shaw in two productions of Wynn's play Bernard and Bosie: A Most Unlikely Friendship[3].

Wynn talked about his early years:

"As a child, one of my first memories in the early 1970s was of watching reruns of the original Star Trek series on Sunday afternoons. Over the years, the characters seemed like old friends and my enjoyment of that show led me as a young teenager to other programs, such as Space: 1999. In succeeding years, I had the pleasure of attending, working on, and ultimately organizing a number of varied events, conventions, and personal appearances featuring many of the "Star Trek" and "Space: 1999" actors and actresses. Hearing these men and women speak about their lives, experiences, and their craft has always been fascinating to me.[4]

During this period, Wynn, (who adopted a Vulcan persona using the pseudonym "T. Wxyn"), also served on the Command Staff of Starfleet, a global role-playing Star Trek club). In 1981 he was appointed Chief of Communications and editor of the Starfleet Supplemental Communiqué, then served as titular editor of the Starfleet Communiqué. Later dismissed as Chief of Communications, in 1983 he left to found another Star Trek fan organization, Trek International, a group that ultimately boasted some thirty chapters worldwide. Wynn also served as editor of that organization's publication, The Fleet Herald, throughout his tenure with the group. Trek International operated for some six years before disbanding; many of the chapters merged into "Starfleet". The organization subsequently updated the name of the group to STARFLEET: The International Star Trek Fan Association, Inc., in recognition of the contributions of Trek International. The Guinness Book of World Records now recognizes "Starfleet" as the world's largest science fiction fan club.[5]

Wynn also participated in fandom by writing to Interstat and other fan publications with letters of comment in the 1980s on issues of the day, generally related to Star Trek:

"When told of your ridiculously hilarious ideas of the Carol Marcus/Jim Kirk relationship earlier this year at Trekkon '83, Bibi Besch just laughed...she did not portray the character of Dr. Marcus in that light, as an "ultra possessive career-and-self-centered female." Where do you read, or tell me—did I miss the portion of TWOK where Dr. Marcus is portrayed like this? I think not. It is Bibi's idea—and many others' also—that David was an "accident". Carol hadn't wanted a son at that time, but it happened and she decided to go through with the pregnancy/birth, etc.; perhaps morally she felt that it was wrong to have an abortion. Who knows? But these ideas certainly make more sense than the garbage you have been continually spouting-off to fandom."[6]

"Thank God for reasonable Trekkers in fandom. Everyone heed the wise words of A.C. Crispen [sic] and Howard Weinstein— DO NOT join the Association for Readable Trek. Buying books, or buying ANYTHING for that matter, should be and is the personal choice of every individual. We don't need censorship committees or "associations" to set guidelines. Anyway, Pocket Books must have done SOMETHING right—or Web of the Romulans wouldn't have been on the best seller lists for so long."[7]

"I am writing this letter to try and locate a gal who, almost five years ago, wrote a wonderful Space: 1999 story that appeared in a Star Trek fanzine. Her name is Lucy D. Witt. Has anyone heard of her or know where she lives? There is interest in reprinting her story "Mission: Morale," [9] but I want to contact her and get the necessary permission, first, of course. Thanks for your help. Lucy has to be somewhere."[10]

"I am one of the many who have ordered Courts of Honor and Before the Glory from fan author Syn Ferguson... As convention chairman of Trekkon '83, I welcomed Ms. Ferguson to our convention and she was invited to participate in a special reading of fan fiction... now over 2 1/2 years in the past. Ms. Ferguson began work on Courts of Honor, followed by Before the Glory at  least 1 year prior to this time. Since attendees at Trekkon '83 ordered copies of  both of Ms. Ferguson's works, I feel that her delinquency possibly marred an otherwise successful event. Not anyone in Star Trek fandom can dispute the fine work of Ms. Ferguson, when available. However, the delays, gyrations, and inappropriate behavior of the author and her spokespersons is totally unheard of and should not, and cannot, be tolerated any longer.[11] 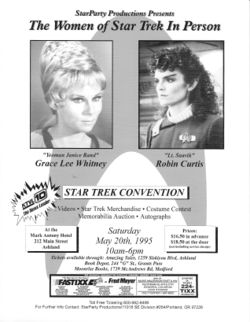 Wynn produced the short film The Return of Victor Bergman, an eight-minute fan-production scripted by Robert E. Wood and Barry Morse. It featured a new performance by Morse in a return to his role of 'Professor Victor Bergman', and clips (including Morse and various other actors) from the Space:1999 television series. Directed by Robert E. Wood and Produced by Anthony Wynn, it debuted at the Journey to Where convention Austin, Texas in 2010. The film was also screened publicly at the Alpha: 2012 convention in Burbank, California. It has been dubbed the "50th episode" by fans of the show.[13] 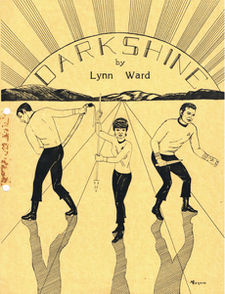 Front cover by Madeline Rogers, the back cover is blank.

Between 1983 and 2014, Wynn edited 33 stories that appeared in six fanzines he also published. These include one Star Trek novella and five Space: 1999 anthologies.

The Alpha Files was released by Reconnaissance Press in 1985. It featured four stories based on the Space: 1999 television series: 'Total Eclipse" by Terry S. Bowers, "Water" by Janet Walker, and "They're Only Deadly While in Your Body" and "The Master of Ist", both by Rebecca Eisenhuth. The cover art is by Judy Moore.

Everything Yet To Be

Everything Yet To Be was published in 2005 especially for the Earthbound convention held in Tampa, Florida to raise funds for Parkinson's disease treatment and research. Wynn edited this collection of ten short stories based on the Space: 1999 television series.

The stories included are: "The Return of Victor Bergman" by Michael Lindow (not related to the fanzine or fan film of the same name). Ellen Celeste Lindow wrote "Stability", "Remembrance", "Boundaries", and "A Dream So Real"; Terry S. Bowers wrote "Uniform", "The Flowers of Our Future", and "A Promise of Things to Come"; Colleen Bement wrote "Life Signs"; and jointly, Ellen Celeste Lindow and Michael Lindow wrote "Another Option". The cover art was drawn by Robert E. Wood. 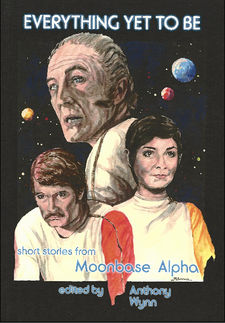 Cover of "Everything Yet To Be", artwork by Robert E. Wood

The Return of Victor Bergman

The Return of Victor Bergman contains four stories; it was edited and published by Wynn in 2010 to commemorate the late actor Barry Morse who portrayed 'Professor Victor Bergman' in Space: 1999. It was prepared especially for the "Journey to Where" convention in Austin, Texas. It featured the stories "Payload" and "Victor/Victoria" by Ellen Celeste Lindow; "Cat and Mouse" by Meredith Kausch; "Flip Flop" by Michael Lindow; as well as the script and DVD of the short film The Return of Victor Bergman.

In 2012, Wynn edited and published Moonscape, featuring 11 stories based on Space: 1999: "One, Alone" by Robert E. Wood; "Adventure of a Lifetime", "Shooting Star", and "Symmetry" by Terry S. Bowers; "Full Moon and Empty Arms" by Ellen Celeste Lindow; Another Time, Another Life by Rebecca Eisenhuth; "Triskadecahedron" by David Welle; A to Z by Meredith Kausch; Anomalies by Michael Lindow; "Terra Alpha" by Charlene Scott; and "Weightlifting" by Ellen Celeste Lindow and Michael Lindow.

Edited and published by Wynn in 2014, Alternate Moonscape features three stories by Terry S. Bowers: "Lines of Destiny", "Innocent Bystander", and "Duty Shift" that give further insight into the character of 'Pam Rose' in Space: 1999.

In 2016, Wynn married artist and fellow fan Adrian Flores in a ceremony held in Yachats, Oregon.[14] They currently reside in the Hill Country of Central Texas.