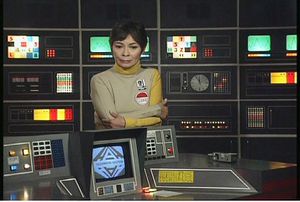 In a still from the short film, "Message from Moonbase Alpha", Zienia Merton reprises her role of Sandra Benes.

Zienia Merton is perhaps best known for her portrayal of Sandra Benes in Year One amd "Sahn" in Year Two of Space: 1999.

Merton's other significant science-fiction credit was as Ping-Cho in the 1964 Doctor Who story Marco Polo, long since lost in its original form.

In May 2009, Merton returned to the world of Doctor Who, 45 years after her appearance in Marco Polo, to record a special episode of The Sarah Jane Adventures (starring Elisabeth Sladen).

In the two-part episode "The Wedding of Sarah Jane Smith", broadcast on BBC One on 29 and 30 October 2009, she worked alongside special guest star David Tennant.

In December 2018, an audiobook of John Lucarotti's novelization of the Marco Polo serial was released in December 2018, narrated by Merton in her final professional engagement prior to her death. Merton noted that her career both began and ended with Doctor Who.

Merton returned to the role of Sandra Benes in the short film Message from Moonbase Alpha, a seven-minute fan-production scripted by Johnny Byrne and directed by Tim Mallett, The film also featured clips (including Merton and various other actors) from the Space:1999 television series. It debuted at the Breakaway convention in Culver City, California on September 13, 1999. It has been embraced by fandom and dubbed the "49th episode" by fans of the show. 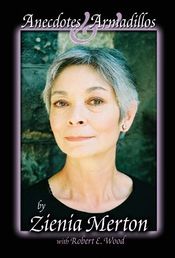 Fans embraced Sandra Benes, as played by Merton, and wrote stories featuring the character. An early zine The Meeting Point contains fan interviews and fan fiction where actress Zienia Merton meets Sandra Benes. Various other fan fiction stories also feature Sandra. The fanzines Everything Yet To Be, The Alpha Files, Moonscape and The Return of Victor Bergman are all gen Space: 1999 short story collections of fan fiction by varied authors that include the character.