From Fanlore
(Redirected from SpaceCon)
Jump to navigation Jump to search

You may be looking for Space-Con, a general science fiction/Star Trek convention.

The first thirteen cons were held under the auspices of the International Space: 1999 Alliance. Two additional independent SpaceCons, also benefiting charitable causes, were mounted in 2001 and 2003.

Following the 1978 con, two fans broke away and attempted to organize their own con. See The Space: 1999 Convention.

Hello people! As we all know the Space Convention is only three short weeks away! Can hardly believe it! And with this little announcement comes another little announcement* Presently the "Alliance" treasury has the minimum to cover con expenses. The guest list for this year's convention is most impressive as you know but those overseas flights ad up - close to $1000.00 each. For this con to succeed more fan response is needed and NOW! Even if you are not going a supporting membership is very important - and if you are going get that membership in now! Final date is July 15th and all membership orders must be accompanied by a S.A.S.E. to receive your membership. I hope all members will support Con'79 for without it this will mean a large blow downwards for Space fandom.

The con was also known as SpaceCon: 2001. It was held on July 27-29, 2001 at the Radisson Hotel at Sabal Park, Tampa, Florida. It featured actors Barry Morse and Nick Tate. There were a number of miscellaneous panel discussions, and fan fiction panels; as well as episode discussions with Nick Tate and Barry Morse following viewings of the episodes Death's Other Dominion and Black Sun. It was chaired by Ellen Celeste Lindow and benefited The Parkinson Foundation, donation: $4,770. Attendance was approximately 100 (held in conjunction with a local convention with 300 additional attendees).

Some of the con highlights included: 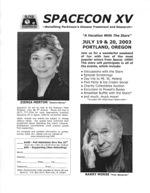