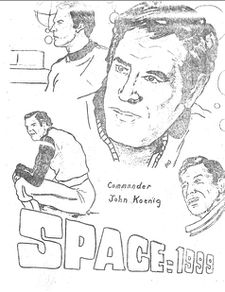 Martin Landau is perhaps best known for the roles of 'Rollin Hand' on Mission: Impossible and Commander John Koenig in Space: 1999.

He is the winner of three Golden Globe awards and a Best Supporting Actor Oscar in 1985 for the film Ed Wood.

Additionally, he played roles in fan favorites, including the Harlem Globetrotters on Gilligan's Island and Savage.

The group published quarterly newsletters covering both actors. The newsletters were initially entitled "Mission: 1999", then changed to The Landau/Bain Concordance. When the actors separated, the clubs also split into separate entities: The Martin Landau Aficionados and Barbara Bain International. Jointly and separately, the clubs were in existence for more than 25 years.

A large number of fanzines contain stories, commentary, and artwork of the various characters Landau played on television, including Rollin Hand (Mission: Impossible), Paul Savage (Savage), and billionaire J.J. Pierson (Harlem Globetrotters on Gilligan's Island). Specific titles that contain stories featuring the character of Commander John Koenig in Space: 1999 include Everything Yet To Be, The Alpha Files, and Moonscape.