ComLoC is a Space 1999 letterzine published out of Mobile, Alabama. It was created by Chuck Raue, one of the founders of the The International Space: 1999 Alliance and edited by Raue and Carl Lamb. All known issues have been scanned in here.

From a January 1977 ad: "ComLoc is a Space: 1999 discussion fanzine featuring letters of comment from fans discussing various topics relating to the science fiction series Space: 1999. The first issue will be out in late November and is available for 24¢ or two 13¢ postage stamps. Besides letters there are fanzine reviews and a free ad section in each issue. Space: 1999 is a new & innovative science fiction television show that is now drawing its own fan following. ComLoc is a zine which gives these fans a place to express their feelings about the show and a place to openly talk with others.[1]

An eBay seller in 2010 described it as: "An open forum discussion 'zine in which fans of the show would submit letters talking about different aspects of Space: 1999 and debate topics from one issue to the next as well as comments on new episodes as they were being aired. Also featured a review section of other fanzines, 1999 fandom news."

By the time the zine ceased publication in 1979, there were 1,100 subscribers. 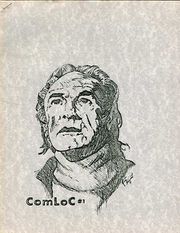 The cover is printed offset, the interior pages are photocopied.

If you’re a S:1999 fan and want to read what could develop into a greater letterzine, get this. Comloc #1 contains analysis, questions, news, reviews, free adds – all within a friendly mimeod atmosphere. This first issue is from December of last year and contains many comments on how the letterwriters became interested in the show, met the actors, etc. It is sure to blossom into an interesting zine of probe and comment, if Chuck can get enough people interested. Comloc also printed reviews of S:1999 zines (which I never knew existed); this should be a great help to those of you out there who possess the same frantic energy concerning S:1999 as we do for Trek. Good cover by Siegrist adds the class that mimeo zines are often looking for. [2] 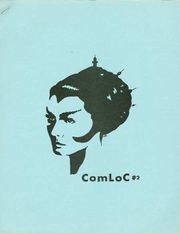 No slur on ye olde trekfen, but dammit, one of the writers in this zine is right. ST fans DO get a little set in their ways a bit about the quality of particular episodes of ST (not that I'm saying trekfen are not critical, just a little stubborn here and there). In this unusual zine, Space: 1999 fans write in to speak their piece about anything and everything they do/don't like about that show, and believe me, they don't pull any punches! My favorite letter was the one from Pam Beckett (alias "motormouth") — she was absolutely hilarious! Unfortunately, a page was left out of my copy, so I don't know how she ended the letter. There were nine letters from the fans and one from Gerry Anderson, one of the producers. All were extremely well written and very readable. The letters were followed by reviews of three Space! 1999 publications —v ery well done by Chuck Raue. And ad section of sorts trailed after the reviews. A letter/blurb about the cancellation of the show and a call for a mail campaign to get it back on ended the zine. There was no artwork within the zine except for a poorly mimeographed picture-drawing (you know the type — copy a scene from a photo/filmclip and send it in as art), but there was a bold (and simple) ink drawing of Maya on the cover of the zine. It was rendered by one called "Cal", who I think is Carl Lamb...am I right? All in all, a zine in an unusual format definitely worth looking into! LAYOUT: 3 CONTENT: 5 OVERALL: 8 [3] 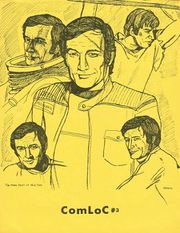 ComLoC 3 was published in June 1977 and contains 22 pages. Edited by Chuck Raue & Pam Beckett. Cover: 'The Many Faces of Nick Tate' by Kathi Lynn Higley. 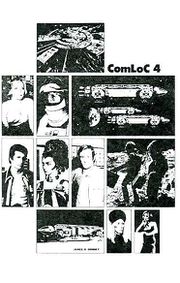 ComLoC 4' was published in October 1977 and contains 27 pages. It was edited by Chuck Raue & Pam Beckett. Cover: 'Space:1999 Collage' by James D Denney

With the current issue #4, Comloc has gone photo-offset, reduced. While I personally don't like the size of the type, this is a fun zine. The cover by James D. Denney is fantastic, but after a while, the arguements over who's the best character and why Year 1 is better than Year 2 get tedius. Not bad for 50 cents. [4]

ComLoc Is a Space: 1999 letterzine. It Is fashioned in much the same way that Halkan Council was done as far as letters go. The first thing you'll notice about this issue is the gorgeous cover by James Denney. It looks like a collection of Kodalith photos, and they are arranged in a professional-looking array. The letters inside cover a wide variety of subjects ranging from the ST-fandom-vs.-'99-fandom conflict to the year-1-is-better-than-year-2 controversy, and much, much more besides. The letters within ComLoc are usually fairly long and quite detailed, and it looks like editors Chuck Raue and Pam Beckett have gotten the lines of communication v/ide open in 99 fandom. Buy a sample copy and see. [5] 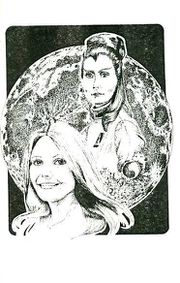 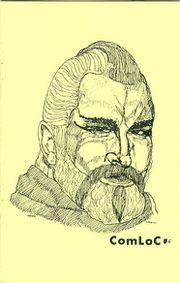 cover of issue #6 -- "Mentor" by Kathi Lynn Higley. A fan in the next issue of "ComLoc" writes: "The cover of ComLoC #6 was fabulous. The yellow cover gave the issue a high quality look." 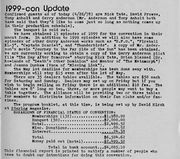 details about an upcoming con

ComLoC 6 was published in May 1978 and contains 10 pages. Edited by Chuck Raue & Pam Beckett. Cover: "Mentor" by Kathi Lynn Higley. 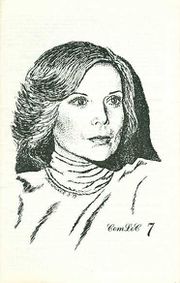 sample pages from issue #7, includes a piece of art by Joni Wagner. Aside from some small spot illos, there were two full-page illos in the letterzine series. The illo portrays "Maya."

ComLoC 7 was published in June 1978 and contains 25 pages. It was edited by Chuck Raue & Pam Beckett. Cover: Helena Russell by Joni Wagner.

It has been scanned online pdf here.

ComLoc contains quite a lot of material – 25 pages of text in reduced form. For any Space: 1999 fan, there should be something inside of interest. David Barnes has a discussion of the time dilation effect compared with earth and the moon and how time has passed on each since separation. There is a defense of Barbara Bain’s acting ability by Kathi Lynn Higley, more year-one-versus-year-two conflict by various people, and J.L. Shevlowitz does some calculations on the number of people killed off in the first season, and the discrepancies thereof. Co-editor Chuck Raue has a very convincing letter concerning why Maya’s powers should be reduced or eliminated. Other equally interesting letters pack this issue, with a section of review and dealers in the back. ComLoc is getting progressively better, and it seems that although the fans have in the past devoted a great deal of time to petty arguments, it looks like they are through that now. If you are not a ’99 fan, get a copy of ComLoc. The dignity and seriousness with which the ’99 fans conduct themselves will make a convert out of you, even if the show never did. [6] 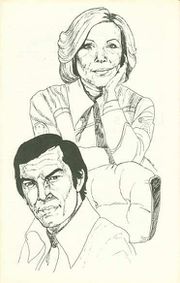 sample pages from issue #8, the second full-page illo in the letterzine series -- this one is the inside back cover, the artist is Kathi Lynn Higley

ComLoC 8 was published in July 1979 and contains 20 pages. It was edited by Chuck Raue. Cover: John & Helena by Kathi Lynn Higley.

It has been scanned online here, Archived version.