You may be looking for Alpha Log, another newsletter with a similar title.

Alpha Newsletter is a gen Space: 1999 newsletter published by Stephen Eramo. There are at least 23 issues.

It was a dark and stormy night (really, it was) and, if I remember correctly, a Tuesday. I waited with cautious anticipation for a new British Sci-Fi TV series called Space: 1999 to premiere that evening on the local WCVB Channel 5 network. A neighbor and I, both diehard Star Trek fans, were just ready to dismiss this fledgling entry into the genre world. After all, nothing could ever replace Star Trek, right?

Although Space: 1999 did not replace Star Trek, my neighbor and I agreed that this new show was not bad at all. As the weeks went on and I watched more and more, I soon fell in love with 1999. Again, it was something new and after 79 episodes of Star Trek, which I had watched and watched and watched, I could certainly appreciate a new twist on things. I came to enjoy 1999 so much that I decided to start publishing a newsletter devoted to the show. At the time I was 14, and while I had always enjoyed writing, I didn’t know quite how to go about doing this. However, I did my research, looked at other newsletters, and had soon planned out my first couple of issues. Alpha Newsletter was born! I advertised in Star Trek newsletters and other fan club-type publications, and eventually began to receive inquiries from interested parties. Initially a relative of mine took the newsletters to work and Xeroxed copies for me to send out to people. As time went on, the newsletter became so popular that I had to have it professionally printed. Either my father or grandfather would drive me into Harvard Square in Cambridge where I went to Gnoman Copies (I think that’s the correct spelling) to have the newsletter professionally printed (and now even on different colored paper each month!). I figured out how much I would need for printing, supplies and postage and charged a yearly subscription rate. I ended up with over 500 subscribers from around the world, including Asia, Europe and Australia. During the second season of 1999 I was both proud and flattered to receive honorary membership acceptances to Alpha Newsletter from Nick Tate (Alan Carter), Prentis Hancock (Paul Morrow), Zienia Merton (Sandra Benes), Anton Phillips (Dr. Bob Mathias), John Hug (Bill Fraser), Peter Porteous (Petrov), Alibe Parsons (Alibe), Sarah Bullen (Operative Kate), Sam Dastor (Dr. Ed Spencer) and Clifton Jones (David Kano).

Alpha Newsletter ran for eight years, and during that time I made a number of friends that I’m still thrilled to have 30 years later! 1999 opened up a whole new world for me, especially when it came to my professional life. On one of my early trips to the UK I had lunch in London with John Hug, his longtime partner Dee Hart, and Sarah Bullen. The conversation eventually turned to my newsletter and John, Dee and Sarah all agreed that if I loved writing that much, then I should pursue it in some fashion. It took me a little while, but I’m happy to say that this summer (2011) I’ll be celebrating 25 years as a professional entertainment journalist. Thank you Space: 1999. Who knows what I might be doing today if way back when I had dismissed it as just another Star Trek wanna be, not to mention all the long-standing friendships as well as fun and laughs that I would have missed out on as well.[1]

Many issues have been scanned here.

Alpha Newsletter 1 was published in January 1976.

Alpha Newsletter 2 was published in spring 1976 and contains 7 pages.

The editor writes: "In upcoming issues I plan to have more features, articles, and photos. I think for a 15 year old I'm doing pretty darn good. I hope you all like Alpha Two. Best to all, Stephen." 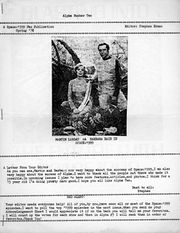 Alpha Newsletter 3 was published in summer 1976 and contains 7 pages. 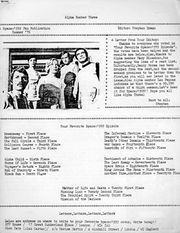 Alpha Newsletter 4 was published in summer 1976 and contains 8 pages. 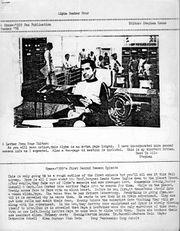 Alpha Newsletter 5 was published in 1976.

Method of reproduction: Xerox and ITEK-offset, 22 pages. Issue #5 of "Alpha Newsletter" is a special on Nick Tate (Alan Carter). Contained in it are transcriptions of Nick's speeches at August Party, his biography, and Alan Carter's biography, reviews of "The Devil's Playground" (movie), and "The Day After Tomorrow" (TV special), as well as several articles about Nick reprinted from several magazines. Also included are a list of Alan's "zaps," most liked lines, notable episodes, and an ad for an upcoming ST/'99/UFO/SF con. Issue #6 will be a Landau and Bain special, and #7 a Anholt/Schell/Merton/Phillips special. To date this is the best issue of "Alpha Newsletter." Numbers #1-4 are hardly more than short reprints of articles discussing '99. This issue is a must for any Tate fan.[2]

Alpha Newsletter was published in 1977 and contains 19 pages.

This issue of Alpha Newsletter is a special Landau and Bain edition. The issue starts off with an announcement of the 1999 letter campaign urging fans to write to keep the show on the air. Professional biographies on both Landau and Bain supplied by I.T.C. as well as two short character sketches on Koenig and Russell are also in this issue. "The Lunar Woman: Bain as Doctor Helena Russell" by Deborah Walsh is an article examining the difference between the characterization of Doctor Russell in the first and second seasons. It is a well written article providing a good view of the two versions of Doctor Russell. "Feeligs" (I think it's supposed to be "Feelings"), by Leslie Ann Marshall, is a short story about the aftereffects of a meteor shower which severely damages the medical section and blinds Doctor Russell. The story is fairly well written and attempts to feel out just what kind of relationship Russell and Koenig have by exploring Koanig s thoughts through the ordeal. The sxory v/ould have been improved if the endirs hadn't been so quick and seemingly rushed. The rest of the issue is made up of two reviews; one of "The Rules of Luton" and one of "Space Warp", some lists of movies and TV programs that Bain and Landau have appeared in, a section of ads, and a few pictures of Bain and Landau scattered through out. The abundance of typoes in some places can get to rather irratating [3] but over all this is a pretty good issue of Alpha.[4]

Alpha Newsletter 9 was published in summer 1977 and contains 16 pages. 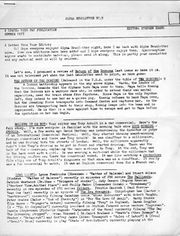 See reactions and reviews for Killara.

Alpha Newsletter 10 was published in summer 1977. 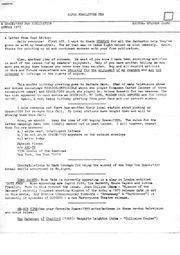 Alpha Newsletter 11 was published in fall 1977 (before November) and contains 18 pages. 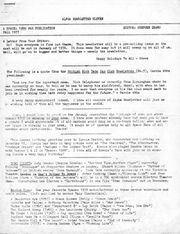 Alpha Newsletter 12 was published in January 1978 and contain 21 pages. The front cover of Nick Tate is by Mary Bloemker, the interior art is by Stephen Eramo. 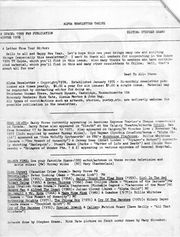 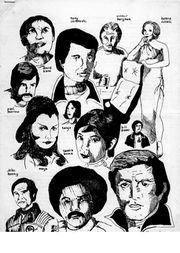 Alpha Newsletter 13 was published in winter 1978 and contains 18 pages. 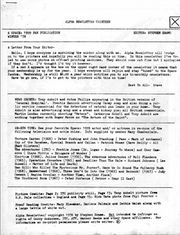 Alpha Newsletter 14 was published in spring 1978 and contains 22 pages. 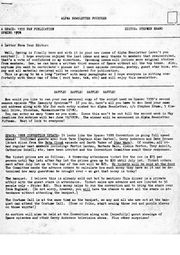 Alpha Newsletter 18 was published in January 1979 and contains 19 pages. 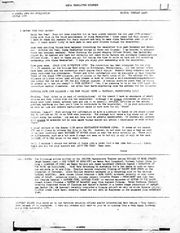 See reactions and reviews for A Minor Conspiracy.

Alpha Newsletter 21 was published in June 1979 and contains 19 pages. 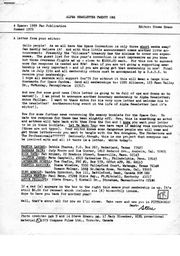 I hope all members will support Con'79 for without it this will mean a large blow downwards for Space fandom. 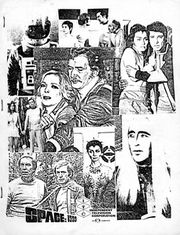 Alpha Newsletter 24 (unknown if this issue was published)