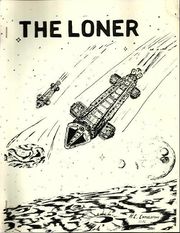 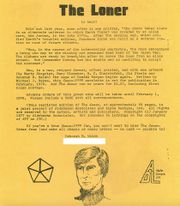 flyer for a later edition

The first issue sold out quickly and it was reprinted by Deb Walsh.

Walsh planned a "Loner Collected" issue, but it was never completed. 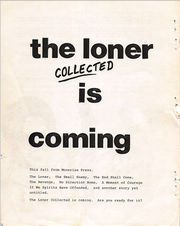 flyer for the never-published "Loner Collected"

From the flyer for second 1978 edition: "Sold out last year, soon after it was printed... now, in a new, retyped format, offset printed, and with new artwork by Marty Siegrist, Mary Bloemker, H.C. Chmielefski, Jim Steele and Deborah M. Walsh, this saga of Daniel Morgan begins again."

From the publisher: "The novella featured an original character, Daniel Morgan, who was abducted and altered by aliens years before. Morgan had subsequently returned to Earth to defend his homeworld against attack, and had been presumed lost for 20 years, long before the catastrophe that put the moon on its present course. The Alphans are as shocked to meet him in space as he is to find Earth's moon catapulted out of orbit. The original edition included the lovely cover by Henry Chmielewski, and lots of great interior art by Marty Siegrist." [1] 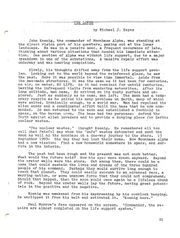 Another summary: "As a young man, Daniel Morgan spent a year of his life with an alien race who transformed him by mixing four types of alien blood with his own, making him indestructable and deadly to his fellow humans. During the end of a war with another alien race, the Jarons, he is hurled and lost in deep space. Presumed dead for 20 years he suddenly reappears on Alpha. Thus begins a series of adventures of the Alphans with their newest member." [2]

From the Author's Preface

I wrote this story halfway through the first season of SPACE: 1999 after I decided what things I would add to make the show more believable. I never intended at the time to have it published anywhere. It was written solely for my own peace of mind.

Things have changed since then. Now the story is in print.

The ideas that I personally thought would improve the show have been used in one form or another. Strange how things happen. Anyway, a word of warning: this is my first attempt at fan writing, so please don't expect miracles.

The Loner is the first, in a series of stories set in an alternate universe to aired SPACE: 1999. In that universe, the Earth was involved in an alien war during the late 1970's, and Moonbase Alpha was built primarily as a defense against future attacks. Some readers may find this similar to the premise of the program UPO (as I did when I first read the story). However, Mike Heyes lives in an "isolated" area (North Dakota) and has only seen UPO once. And other similarites to '99's second season are, as stated above, coincidental. Future stories in the Daniel Morgan series will be tied in with the new season. Whether or not they will be published is up to you. Please send us your comments, and let us know if you would like to see the rest of the series in print.

This novelette is the first in a series of "alternate universe" stories within the "basic background of the series, "Space: 1999". And, for a first effort, it's pretty good. The story deals with the Alphans acquiring a new resident. This new Alphan is an earthman who wa3 taken by a group of aliens and then transformed into a different type of being. This man was the great hero of a war earth fought with a group of alien invaders in the 1960's. Ho was presumed lost in the war until he saved Alpha from an attack by hostile aliens. Most of the story deals with the Alphan's accepting him as a fellow base member and his fight to be accepting among them. There are some good action segments and some good descriptions of life on Alpha in this story. Characterization tends to suffer in the beginning, especially with Koenig and Bergman, but as the story progresses this matter seems to rectify itself. The story itself is good and rather exciting. I just couldn't put the thing down after I had started! There is not much else I can say without reveling too much. The artwork by Mary Bloemker, H. C. Chmieiefski, Marty Siegrist, and Jim Steele is fair, but nothing really great. For a mimeo 'zine it really looks pretty good and is enjoyable reading. If you haven't already gotten a copy then I suggest that if Patti reprints it that you not miss it again. [3]

"The Loner" is Michael Heyes first attempt at fan-fic and a damn fine one at that! Written by Michael midway through the 1st season of Space and before any in-series background history on the Earth of 1999's time was offered (and primarily for his own personal amusement and satisfaction), "The Loner" offers us not only a unique alternative Space universe but also a unique hero. Daniel Morgan, Earthman, removed from Earth by a race of aliens friendly toward us and then returned to it a year later strangely transformed to meet the threat of invasion by hostile aliens known as the Jarons... Technically still human to look at, Daneil's biochemistry was altered to better outfit him for his role as champion of Earth. Skin and hair dark blue, color blind, and with blood so toxic as to be lethal to any being who comes in contact with it, Daniel Morgan almost single-handedly helped conventional Earth forces beat off the dreaded Jarona and then, during the final conclusive battle, was flung out into deep space where he drifted for almost twenty years. Drifted, until an errant moon meanders into the area of spice he's in and comes under attack by hostile aliens (not the Jarons, however). And therein hangs the tale of "The Loner". Accepted upon Moonbase Alpha after aiding them in defeating their aggressors, Daniel must prove himself worthy to remain to a hostile and suspicious Commander Koenig, who sees him as only one more threat to the Moonbase. "The Loner" is a classic 99 zine, it's alternate history (an alien invasion in the 1970'a instead of the later interracial war of the 1980's mentioned by Koenig in "The Rules of Luton") In many ways superior to the history later related in the actual series and Heyes' grasp of the characters of the series expert. A definite MUST for Space fen! [4]

This zine is one of the finest Space: 1999 to be produced. The first of a series, see "Revenge" in Moonbeam #1/2, it chronicles Daniel Morgan's first days on Moonbase Alpha, and the problems he faces in reentering human society. With offset artwork by Marty Siegrist, H.C. Chmielefski, Mary Bloemker, and Jim Steele, if this zine could be produced entirely on off set, it would be fantastic. With mimeo, it's still a damn good zine. [5]