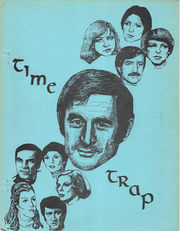 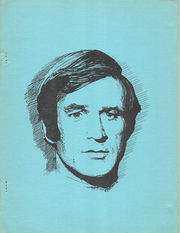 Palenik appears to be the main writer.

Summary from an ad in Alpha Newsletter #11: "Featuring ALINC (Alien Communications Investigations Coorporation) a stalwart band of time travelers who, while on a mission to Earth's past, come to the rescue of Alan Carter, caught up in the Salem witchhunts of 1692. James Naradie, Eve Matheson, Carla West, and Stephanie Ingersoll race against time to rescue Alan Carter from the superstitions and frightened villagers who have branded Alan a witch and have sentenced him to die!"

When I took over the task of rewriting Steve's early version of Timetrap, I never imagined how much work or how much fun it could involve. And I certainly never dreamed it would change my life.

Timetrap has been both an education and an experience. It probably would not be done now if I hadn't moved: to Boston to be closer to my co-writers. Now that it"s in print, I want to thank Pat, Sharon and Steve for the immense help and support they've given me these past six months, 1 don't know what I would have done without friends like you. Of course, you gave me memories—the nightly three-hour phone calls and the all-night reading session of this rough final draft, the writers' sessions, the trip to Salem and the Corwin Witch House.

I don't, as a rule, ENJOY panning a 'zine but in his case I really don't have much of a choice! Definitely for only the hard-core Alan Carter fan, "Timetrap" involves involves a trip into Salem, Massachusetts at the time of the witch hunts for Alan and a meeting there with a time travel team from his own future's past. The plot behind this story isn't a bad one but, unfortunately, the writing bears all the trademarks of that old cliche "too many cooks spoil the broth," what with extremely disjointed sentence structures, confusing plot sequences, and a quite a bit of wistful thinking on the parts of the authors (who are unmistakeably the models for the members of the time travel team, which consists of three women and one man). There are also numerous bald spots in the scientific reasoning (They could have at least put together some non-valid "throw-away" explanation for just HOW Alan wound up where he did!) and quite a number of circumstances left unexplained (the telekinetic powers of one member of the quartet, for instance, is left practically an unknown factor until mid-way through the novel where it suddenly comes into prominence and becomes a deciding factor in the plot). All in all, the only thing that brightens this novel is the artwork of Mary Bloemker, and there's far too little of that! Not recommended. Sorry. [1]